Attempting to break down each prospects week around the developmental leagues.

Expanding upon the FTB updates of scores and points this will be a round up of everything these kids were up to, that I gather from newspapers and the internet, not being able to see any of these games myself, unless the OHL kids are playing against the IceDogs, because Cogeco wants me to buy all the sports packages to get the OHL package and I have no interest paying for NASCAR races.

-2. Thats his one stat for the Generals 7-4 loss to the Erie Otters. ERIE OTTERS! Shame Biggsy, shamesy.

A great shame was brought to the Jack Gatecliff Arena in St. Catharines as Tyler Biggs scored two goals, though one was an empty netter. Nice stats padding Biggs!

Biggs assisted on the safety goal for the Gens 4-2 win over the Greyhounds.

- Not a bad week for Biggs, 2G, 1A in 3GP. No one I talked to or any articles had big things to say about him either way.

A matching -2 for Connor Brownsy in the Otters 7-4 win over Oshawa, but he also had 4PIM - 2x Tripping

Only a -1 in a 4-1 loss to Belleville for the Otters Captain.

- Two games, a -3 and no points for Brown this past week. But honestly compared to last year a -3 isn't too shabby at all, plus he's on the top line for the Otters who aren't know recently for their defensive skills.

Had no points, no plus/minus (as fancy as the OHL gets with stats), no penalty minutes as the Knights lost to the Sting 4-3 in OT.

Wasn't mentioned in any reports on the game, had a pretty unnoticeable game which isn't surprising since he was a late round pick, and is only famous for being a twin and an insane diver. I looked in the Sarnia paper for their version, but they just ran the London Free Press article. 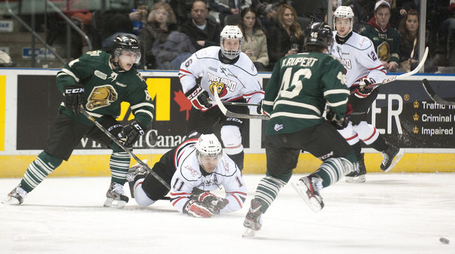 (Surprisingly, Ryan (left) isn't the one lying on the ground)

The headline for this games recap is "Knights Looking Mortal", yes London, time to panic, only 1st in the OHL by 11 points.

Our Ryan Rupert got 5 min & a game misconduct for spearing in the 3rd period.

The Hunters love and trust the Rupert twins like sons, but for the second game in a row, one of them took a needless penalty. Ryan will be suspended at least two games for a spearing match on Kitchener’s Derek Schoenmakers, who didn’t end up injured from the jab.

"Just control their emotions a little bit more," Dylan Hunter said. "We killed a penalty for five minutes and we did a great job, but it’s five minutes we weren’t pushing the puck down the other way trying to score."

So uh, no Rupert updates next week then since the Knights only play 2 games this week.

-so last week was uneventful aside from the game misconduct.

1G and he got an assist on the game winner in a 5-2 win over Guelph.

Guelph got some revenge as the Rangers lost 4-3 in a shootout. Levio assisted on the Rangers first goal, but scored none of his own, and missed in the shootout.

Josh assisted on the first and last goals of the game as the Rangers beat the Knights 4-3.

- Levio was an excellent pick up by the Rangers at the deadline, and this week he showed why, assisting on some important goals and the coaching staff shows faith in his abilities putting him out first in the shootout.

-a recurring battle with Mono has plagued Finn all season keeping him bouncing in and out of the lineup. 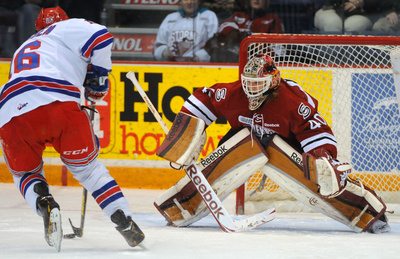 Sparksy (I'm assuming this is his nickname) let in 5 goals on 35 shots, though some were just unlucky, from the Guelph Mercury:

"The one that hurt most came early in the second period, when a long shot by Ryan Murphy seemed to be going wide of the Guelph net, but goaltender Garret Sparks got his blocker on it and the puck fell awkwardly at his feet. Tobias Rieder was there to bang it home."

Sparks made 40 saves on 43 shots for the W. No write up from Guelph Mercury on the game.

Broll got 2 helpers as the Greyhounds beat the Battallion 5-1 in their last appearance at the Powerade Centre, no doubt happy to have another team up north next season.

The Brolldozer (who let a nickname like that pass muster? not enough "-sy" on the end of it) had a line of 0's as the Greyhound fell 4-2 to the Oshawa Biggs'

0G 2A +1 - Percy had his hand in 2 of the Steelheads goals as they beat Kingston 4-1. Percy is a great player, I'd expect him to get some NHL time, not right away but i'd be surprised if he never made it,.

1G 2A for the Steelheads Captain as they beat Niagara 4-2. Last time there was shitty weather on a Friday the IceDogs also made the trip to the Hershey Centre. Luckily for us it's the last time they'll get up there.

No Points and missed his shot in the shootout as the Steelheads fell to the Wolves 3-2.

Morgan Rielly had 2A but the Warriors fell to the Memorial Cup host Blades 5-4. The Warriors are making me sad, so can they jsut forfeit the season and let MCR sign an ATO with the Marlies already?

Assisted on the Warriors lone goal of the game (on the PP) as they lost 4-1 to Medicine Hat.

Summing the weekend up for the Warriors

This past weekend was a great chance for the Moose Jaw Warriors to make a move in the Eastern Conference standings.

Unfortunately for the Warriors they moved in the wrong direction

Hard to find any write ups on this team, but Toninato is a reliable contributor to the Force. 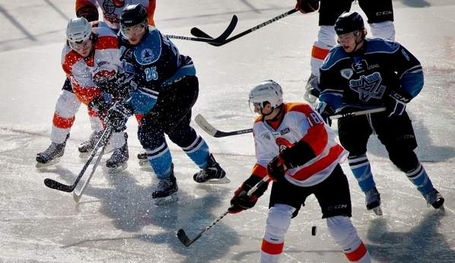 The Omaha Lancers hosted the Lincoln Stars in the USHL's first ever outdoor game, which wasn't the greatest in terms of ice quality for the Afternoon game:

Though it turned out to be more of a Battle on Slush than a Battle on Ice, the Omaha Lancers and Lincoln

Park still will cherish the experience of playing an outdoor game.

Everson did not play this game as well.

2G 1A on 4 shots. Carrick is doing well in the ECHL and should have a shot at the Marlies next year. The Idaho Statesman doesn't have much on this game.

No points, and 2 penalties (slashin/holding) for Sammy as the Steelheads beat the Grizzlies 5-4 in OT.

The Steelheads ended their trip to Utah with a 6-0 victory. Carrick had no points in the blowout.

The Idaho Statesman has a feature up on Carrick

Coach Brad Ralph said Carrick worked his tail off, and waited his turn.

"The one thing that struck me about Sam, in my mind, was his attitude, his willingness to learn and do the little extra things he needed to do to get better," Ralph said. "And every game, well there's ups and downs, but for the most part it's been a steady climb in terms of his growth and his progress."

No points for Tony as they lost to Minnesota 4-2

Cameranesi had the Bulldogs lone goal as they lost to Minnesota 5-1.

No points as they tied Providence 3-3

No points as the Fighting Sioux beat Nebraska-Omaha 2-1

2 Assists, including helping to set up the game winner, as North Dakota won the game 5-2, the second outdoor game for a Leafs prospect this week, which was held after the USHL game mentioned above.