What have you been up to? - Justin K. Aller

This weeks edition is a day longer to include the holiday Monday because I didn't work Monday and didn't get around to working on this on the long weekend.

No points and a checking to the head penalty was Biggsy's contribution to to the Gens 4-2 loss in Sarnia, despite out shooting the sting 42-19

Once again no points for Biggs despite Oshawa getting 6 goals over the Wolves. final score 6-2.

-not a great weekend for Biggs, the bright spot was a +2 in the Sudbury game, was a minus in the other two games

3 assists for Brown as the Otters upset the Knights 4-3, taking the Otters lead in points with 65 on the season.

"They came at us strong in the second period," Brown said "We got hemmed in our zone,"

The end to a rough weekend for Erie, playing the 2 strongest teams in the west 3 times wasn't the greatest, falling 8-1 to the London Knights. Brown had no points, but managed only a -1 in the contest.

1G 3A in 4 games last week, not awful when taking the competition into consideration.

Our half of the Rupert Twins had 1G and an interference penalty in the Knights 4-3 loss to the Otters.

"A lot of us are getting frustrated, because we know what we did last year and we’re not putting up the expectations we should be," said London forward Ryan Rupert, cleared by the OHL following his spearing major last Sunday in Kitchener

Well a loss to Erie seems to be what a team needs to get going.... 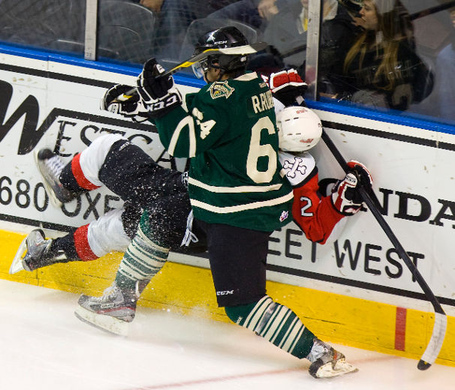 1A and a charging penalty in what was a penalty filled game between the IceDogs and the Knights, their only match in Niagara after the Knights 4-1 win over Niagara in the OHL finals last spring. 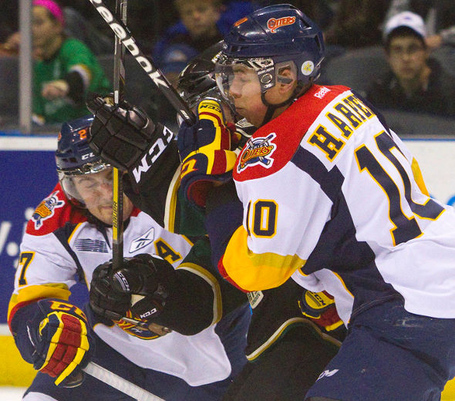 (that's Rupert in between those Otters. had to balance out for the previous photo)

2A for Rupert as the Knights got back on their feet and trounced the Otters 8-1.

-1G 3A was a good set of games for Rupert, whose eligibility in the games was questioned last week do to a spear vs Kitchener.

No points for Leivo as the Rangers fell 5-3 to the rival Storm. 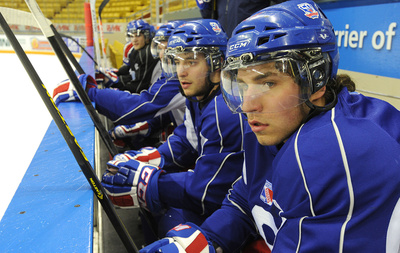 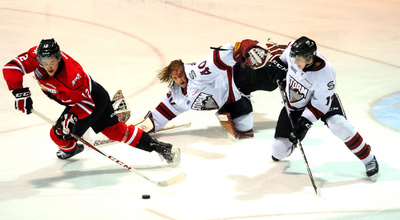 Sparksy made 28 saves for his league leading 7th shutout of the season (3 of those coming against Owen Sound), and added to a streak that is up to 199 minutes.

Why is Owen Sound such a shutout magnet?

"I just really enjoy the bus ride up here," Sparks said of his success in Owen Sound this season. "It’s a good sleep and just the perfect amount of time to travel."

Made 25 saves on 28 shots as the Attack ruined the shut out streak for Sparks with a 4-2 win.

Sparks was pulled for the third after allow 5 goals on 31 shots over the first 40 minutes, although it wasn't for a lack of confidence from the coach.

Sparks was unbelievable again," said Walker, who pulled him to try and give the team a momentum change. 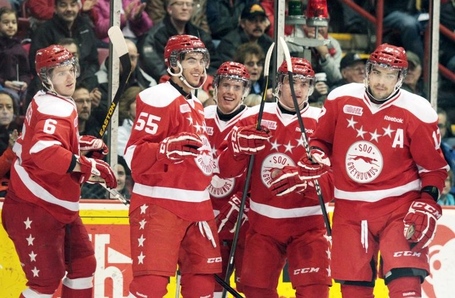 All Zeros for Percy as the Bulls shut out the Fish 1-0.

A -2 and a delay of game penalty got Percy some numbers on the board, but the Steelheads were still shutout for the second game in a row, 3-0 by the conference leading Colts.

2A for Percy as the Steelheads finally scored their first goals of the weekend, but not enough to beat the Fronts who scored 7 goals to the Steelheads 4.

"We let let it slip out of our hands," said Percy. "This late in the season, we can't let that happen."He added, "We just didn't finish the game hard."

And everyone is welcome to come for a visit on Thursday when Percy and the Steelheads come to Niagara.

Our goal as a team is to make the playoffs. We have quite a few games to play still

Love his heart and optimism, but sometimes it's blind.whl

No points and 2 roughing penalties in a rough game vs the Blades. 71 min in penalties given out, as the Warriors fell 3-1 to the Blades.

A trip to Prince Albert did the Warriors well as they won 4-3, our Rielly had 2G (the game winner), 1A as the Warriors came back from a 3-0 deficit.

1A as the Force beat the black Hawks 4-3 in a shootout, Dominic did not score on his attempt.

2G for Toninato as the Force won 6-1 over Waterloo

Everson is listed on the roster on the Lancers website, but seems to watch more than play. Perhaps this was Harvards punishment. Send him to Nebraska, don't let him play.

1G and a fighting major 10 min into the game is how Sam left his mark on the Steelheads 3-2 win over the Bulls.

1A as the Steelheads fell to the Wranlgers 4-2

2A as the Steelheads beat the Reign 4-2

It was the Midnight Circus in Las Vegas! The doors opened to the crowd at 11PM and many circus acts were on hand to entertain the fans in the concourse before the Midnight games began. Carrick had 1A and a tripping minor as the Steelheads gave the Wranglers an extremely early morning 3-2 loss.

UNH defenseman Eric Knodel came to mid-ice and blasted a shot on the power play that went under Milner's glove arm and in with one minute left in the period for 1-1.

"Everyone on this team has huge hearts, huge desire,'' said captain Dennis Robertson.

No points as the Engineers beat the Bears 5-1

No points as the Bears were shutout 2-0

With just over 10 minutes left in regulation, the Bears had another flurry of chances denied, as Lappin could not corral the puck on a wrap-around bid with Grosenick out of position. The puck then squirted up to junior Dennis Robertson (Fort St. John, British Columbia) at the left point. With the Union defense still scrambling, Grosenick gloved Robertson's slap shot out of the air to keep the Bears off the board.