1G (PP) for Biggsy as the Generals lost to the Petes (who have hopes of playoffs pushing them forward) 6-3.

Biggs set off the Generals scoring, with the first of 4, leading the Gens to a 4-1 win over the Petes

Did Not Play (upper body injury) as the Otters were officially eliminated from the OHL playoffs with an 8-5 loss to Windsor. Hey that's about 1 month later than last season! Progress!

Did not play again, and I'm sure he didn't mind missing a 13-3 blowout by the Sting.

Did Not Play once again, and the linked article reveals the Otters Captain has been dealing with a concussion. (Otters lost 6-3)

Ryan Rupert had a +2 and 1A as the Knights beat the Greyhounds 4-3 in OT. The Ruperts made good on their promise to not let OHL leading scorer Nick Cousins get his 100th point of the year, holding him to no points and a -2.

Ryan assisted on the Knights first goal of the game, as they went on to beat the Spirit 3-2

No points, and a hooking penalty in the second is what Leivo got out of the 3-2 win for the Rangers

The Rangers final trip to Brampton ended with a 2-1 win, Leivo nabbing the game winning goal. They'll miss the short drive down the 401 next season when it's replaced with a trip to North Bay.

Leivo rides shotgun and the pair head south to Barrie to meet Rangers’ assistant coach Mike McKenzie who, as per league rules, escorts the boys to Kitchener.

During the ride, Leivo gets a call on his cellphone, about six hours before the Rangers are set to take on the Guelph Storm at the Aud.

"It was Spotter. He said he was excited for us to be here and that he wanted us in the lineup. We were motivated and ready to go." 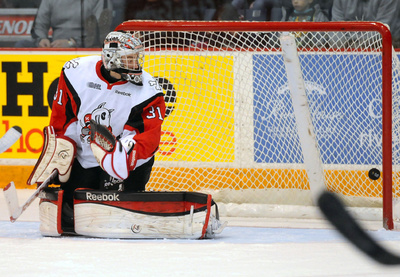 Sparks made 33 saves on 35 shots, but his effort wasn't backed up by the team as they lost to the East leading Colts 2-0.

1A as the Greyhounds beat the Sting 6-3

1A in a 4-3 OT loss to the Knights for the Brolldozer, with a cross checking penalty in the 3rd thrown in.

The 'Hounds squeaked out a 4-3 win over the Steelheads, Broll had 1A, on the Greyhounds second of the game, and helped keep his team alive at the end.

"We played two minutes of the hardest hockey I've seen our guys play," said Keefe, whose club was short-handed for the final 1:37 after Brandon Alderson took what the coach described as "a selfish and uncalled for" roughing minor at 18:23.

With the Mississauga net empty, Hounds winger David Broll blocked a shot in front to help preserve the win.

1A and a +2 for Percy in a painful 8-2 victory over the guys they booted out of the Hershey Centre.

No points and a -1 as the Battalion marched past the Fish 3-1.

No points for Morgan in the 5-1 loss to Saskatoon. 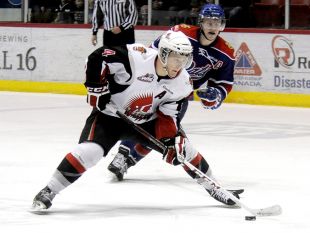 Scored the GWG as the Warriors beat the Pats 4-3

Rielly assisted on the Warriors too little too late power play goal as the second period came to an end, cutting the Blades lead to 6-1. Moose jaw would hold the Blades to only one goal in the third for a 7-1 final score giving Saskatoon their 15th straight win.

Did Not Play - Lancers fell to Musketeers 3-1

Did Not Play in a dramatic comeback with the Lancers scoring the GWG with less than 40 seconds left to go for a 3-2 comeback win.

No points in the 4-0 win for the Steelheads

No points and a tripping minor in the first period for Carrick, and no goal in the shootout, as the Steelheads lost 4-3 to the Bulls

Brad Ross was assigned to the Steelheads on Feb. 21st from the Toronto Marlies

Assisted on the Steelheads second of the game in the 4-3 SO loss.

1A as the Bulldogs fell to the Gophers 5-3

No points as the Bulldogs tied the Gophers 2-2

1A as the Wildcats beat the Catamounts 4-3

The Fighting Sioux had their revenge over the Pioneers as they walloped them 6-1. MacWilliam had no points.

No Points in the Bears 4-1 win over the Tigers

Junior captain Dennis Robertson (Fort St. John, British Columbia) started the play leading to Ryan's goal, passing up to freshman Mark Naclerio (Milford, CT) on the right wing. Naclerio skated the puck into the zone and then passed to Ryan in the slot, who carried the puck through the defense to the edge of the crease. Although Hartzell saved the initial attempt, Ryan collected his own rebound and fired it into the net, bringing Brown to within 3-2.