Phil Kessel's Scoring Drought: A Look At His Shot Choice and Shooting Percentage

Share All sharing options for: Phil Kessel's Scoring Drought: A Look At His Shot Choice and Shooting Percentage

So Kessel isn't the only premier scoring forward struggling to find the twine at these early stages. In an effort to explore why this may be the case, I decided to slog through all 8 games play-by-play sheets and single out Phil Kessel's shots on net and the shooting distances for each. I can do that relatively quickly when it's only 8 games but hopefully I'm not still doing this 10 games from now. Anyway, below is the listing of the games, the shot distance, and the shot type for each of Kessel's shots so far this season:

Now - what can we get from all this? Well - superficially we can say that Kessel's shot selection may have been less then stellar in the first game versus Buffalo - where he hit the net 7 times, but none of the shots came from inside 25 feet. Similarly in the game against the NY Islanders, his shots were generally from further out than 20 feet, and the one time he did fire from closer in it was on a backhand - not a shot type Kessel is known for. If we look at the shooting percentage heat map on shots taken by forwards between 2001 and 2009 it's relatively obvious that most forward shots are taken inside 25 feet (courtesy this article by Gabe at Hockey Prospectus). That fact is sort of relevant when we consider that Kessel is firing snap shots and wristers from 25+ feet out. It's extremely unlikely he's going to score doing so regularly. 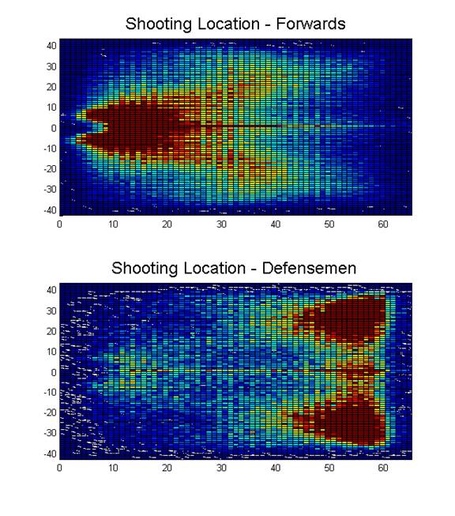 Now - all of this information comes with a caveat - Shot Distance is still a small piece of the Shooting Percentage Puzzle. We know that Kessel's expected SH% on shots in the past has generally been above that expected based on location alone - as indicated by Gabe Desjardins' work here at behindthenet.ca. From 2007 to 2011, Kessel fired 1402 shots on goal at 5 on 5, and scored 111 goals. His expected SH% was 7.4% based on his shot locations, but his actual SH% was 7.9%. He outperformed expectations by 0.5% in aggregate.

So it becomes exceedingly strange that Kessel has yet to pot a goal and much of this may stem from frustration and clutching the stick tightly so to speak. As David Johnson from HockeyAnalysis.com noted recently, the odds of a shooter of Kessel's calibre going cold for this long are very low - in reference to the stretch since Lupul went down due to injury late last season:

@steveburtch And before you say he has been unlucky, there is a 3% chance that a 10.9% shooter would score just 5 goals on 101 shots.

So generally we probably shouldn't expect this to go on for much longer. But before we get too worried about it remember that in 2010-11, Kessel had a 7 game stretch without scoring from October 28th to November 12th, though he only fired 21 shots during that stretch... and then he went another 7 game stretch from November 27th to December 10th of that same season, firing 37 shots during that segment - the exact same total he's fired so far in this early 8 game stretch this year. In fact, between October 28th and December 27th of the 2010-11 season, Kessel fired 106 shots on goal and scored only 5 times.

In other words, the 3% chance that Phil Kessel - the career 10.9% shooter - has actually done exactly what we're seeing right now before in his career and done it once with the Leafs in the past 2 and half seasons. He scored 32 goals that season on 9.8% shooting. I'm relatively certain that eventually things will balance out in the long run. Over the past 4 seasons Kessel's Average Shot Distance at 5v5 has gone as follows:

So you can guess this year is a bit of an outlier, and he likely needs to bring those shots in if he hopes to help his current predicament.

I haven't taken the time to sit down and work out the expected shooting percentage of all of Kessel's shots so far, so this was a relatively quick and superficial look at the numbers, but if anyone wants to take a run at it (and has the time to do so before I get to it) be my guest.