1994-95 killed Mike Gartner's string of 30-goal seasons and may have doomed Mats Sundin's shot at universal admiration. Or not. See what you think:

Share All sharing options for: Weird happenings in short seasons 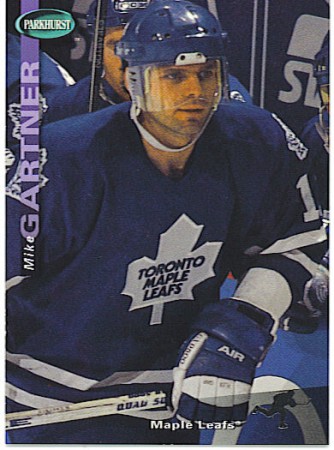 I'm not a big one for predictions, but one I think I can make fairly safely at this point is that Phil Kessel's streak of consecutive 30-goal seasons is about to end at four. This isn't a Kessel bash. 30 goals in 48 games was always a longshot and even if his shooting percentage were to regress to Frattinian levels, it still wouldn't matter. He's just out of time.

While it's kind of sad to lose what was possibly an interesting streak, it's nothing like what the Leafs' Mike Gartner had on the line the last time we went through a short season. Mike had scored at least 30 goals (actually at least 33, but 30 is the nice-sounding round number) every year since 1979-80. That made for fifteen consecutive years. Nobody had done that before and certainly nobody has done it since.

His streak was certainly one of the topics of discussion heading into the 1994-95 season. Mike had himself been one of the key spokespeople for the NHLPA and when it finally became apparent that there would in fact be a season, he was asked about it a number of times. He never lamented the fact that it was probably dead in the water - he just focused on the fact that if he COULD pull it off in 48 games, it would be a significant accomplishment.

Gartner had been picked up by the Leafs at the 1994 trade deadline (I believe this is the one where Cox reported about Fletcher freaking out that time was almost up and he still hadn't made a deal). He came at the cost of a rapidly-declining Glenn Anderson as the Rangers did their best to assemble the 1980s Oilers. Obviously, it worked out for them as they won the Cup despite Anderson only scoring 6 points.

Gartner, for his part, offered secondary scoring to a team that had lost most of it to injury (Cullen was hurt, Borschevsky was hurt and Anderson was slipping). He scored 12 points in the 10 games remaining and added a few nice goals in the post-season. The Leafs again made it to the third round before running out of gas against Vancouver.

A couple of weeks ago, an interesting article from Raw Charge made the front page here regarding Dave Andreychuk's potential for Hall of Fame induction. The case for Andreychuk was based around a long, long period of being very good rather any time spent as being the very best. It's longevity versus peak.

Mike Gartner (elected 2001, so you know how the committee voted) is the poster boy for this argument. At no point in his career was he the best winger in the game, but given that his career overlapped the likes of Guy Lafleur, Mike Bossy, Jari Kurri, Cam Neely and Brett Hull, that's not really a slight. He never had that big, big year that would put him on the map. Instead, he was Old Man River, rolling along, just scoring and scoring, using his tremendous speed and a great release to pile up what would eventually be incredible goal totals.

By the time he was done, he had 17 30-goal seasons (imagine - just with the base amount, that's 510 goals) and the only person at his position to have outscored him remains Gordie Howe. All those other players deemed better year by year? He outscored them all. Now, I watched him play and if you'd asked me, "is this a Hall-of-Fame winger," I'm not sure I'd have agreed. How, though, do you dispute 708 goals? That's why he's in there. To me, I'd probably take Andreychuk at his best over Gartner at his, but was that best long enough, or was the balance decent enough to make the difference? Can you possibly score more than 600 goals and not be a Hall of Famer? That's a question for smarter people than me.

Heading back to 1994-95, though, there were questions about just what Gartner would be able to get done in a very compressed timeline. That was just one of a LOT of questions surrounding that Leaf team.

1995-95 was a weird season, in some ways not unlike this one, and it leads me into another thing I wanted to talk about. Another piece I've found interesting in recent days is the fanpost about Sundin not being Wendel Clark and the issues surrounding his level of acceptance by Leaf fans. While the fact that he was traded for Clark certainly didn't help, there was a lot about that first season that played into this problem of acceptance and I don't think that it gets proper attention.

Like this season, there was no training camp (well, not exactly - there was a training camp in September, prior to the lockout, but not one prior to the actual start of play). The Leafs, a 98-point team coming off their second deep run, had retooled far more significantly than most people recall. Not only had they completely revamped themselves at centre, they had to absorb big changes on the blue line and this would prove challenging.

Up front, the obvious change was Sundin for Clark, but a second deal on draft day brought Mike Ridley to Toronto. Suddenly the Leafs, who'd been playing Gilmour until he almost fell apart, had more quality centres than they had ice time to give them. This would be an issue. The signing of Mike Craig led to the departure of Peter Zezel and his defensive presence, freeing up a little room, but Ridley would end up shipped out of town after a season amid rumours of his being a malcontent. (This went entirely against his reputation heading in). Mike Craig forecast that he'd score 30 goals in Toronto. In three seasons, he'd score a total of 20. Mike Eastwood would try to fill Zezel's shoes with limited success.

The defense lost two key performers in Lefebvre, who went to Quebec in the Sundin deal, and Rouse, who left for the Wings as a free agent. Ellett would be injured and lose some effectiveness. Gill regressed and appeared to be trying to do too much. The Leafs would give minutes to a rookie Kenny Jonsson, an aging Garth Butcher and increase the roles of Dmitri Mironov and Drake Berehowsky. It never really gelled. The defense, which had been such a factor the past two seasons, never really settled in. (The goals-for fell more than the goals-against rose, but I think they lost a lot in the transition game.)

The Leafs as a whole struggled, never getting much beyond .500. In reality, this wasn't much different than the season prior, but we didn't realize it at the time. The Leafs had had 98 points, but this was built on a 10-0-0 run to start the season. After that, they only played a handful of games beyond .500 over 74 games. The playoff run masked the fact that this team hadn't been performing. In 1994-95, there would be no such playoff run. The Leafs bowed out in the first round to Chicago despite being up 2-0 and coming home for Game 3.

All season long, Mats Sundin's performance was excellent. Through the first 20 games or so, he and Clark were both chugging along at a point per game, but then the inevitable happened and Wendel lost some games to injury. Sundin took a lead he'd never relinquish. He'd lead the team in scoring and was great in the playoff series against Chicago.

Where Mats struggled was in the battle of narratives. The team had made significant changes of which he was the most notable, but the team performance went backwards (or at least it appeared to, and appearances mattered). The new Leafs seemed nowhere near as tight as the old ones and as they struggled, they seemed to lack that ever-present ephemeral bit of nothing known as "heart."

Mats faced everything with the sort of quiet Nordic stoicism that we'd all come to know. In this, he was very much the anti-Clark. He wasn't the sort to bust heads when angry. We never really saw him get angry.

It didn't help that he skated like Frank Mahovlich (well, it DID help his game, but not in a way that would benefit his reception) - another big guy with a long, graceful stride that looked lazy to the untrained eye - as opposed to the choppy, clearly hard-working (again, to the eye) strides of Wendel. Mats was composed, almost aloof, and the team lacked the guts of the Wendel era (or so we thought).

Worse, the trade seemed to hurt Gilmour. Gilmour, who had put in two of the greatest seasons a Leaf had ever had (and still the best two I have ever seen), struggled mightily in 1994-95, putting up just 33 points in 44 games. His struggles were matched by those Andreychuk, who fell from a 53-goal pace to just 22 in 48 games.

The storyline was that Gilmour needed to be the go-to guy and the presence of Mats impacted this. Had we thought about it at all, we might have remembered that Gilmour had also had surgery on his failing ankles and was not likely "right" that season. Mats took the fall for costing us Wendel, hurting Gilmour and being the key move in a team that regressed (none of which was on him) - and all he did for us was be our best player, virtually every game and usually by a large margin.

The following year, Mats continued to be Mats and the team got off to a much better start before having a late-season collapse (that greatly resembled last year's), costing Pat Burns his job. Wendel would come back and leave again. The team would continue to slide until the arrival of Quinn and Joseph in 1998-99.

History would prove the Sundin deal to be brilliant, but I think the team struggles of the initial few seasons doomed it in the eyes of Leaf fans. It's not that far removed from the Kessel trade, in that the focus will always be on what was lost rather than what was gained, and this is entirely due to the struggles of the team as a whole rather than the play of the key player involved.

I do think that Sundin's staunchest supporters will tend to be people who were kids at the time of the trade, fans whose strongest playoff memories will be of HIS playoff runs rather than Wendel's. This is common to all hockey fans and is why my mother still swears by Dave Keon and why I consider Doug Gilmour to be the best player I ever saw. It's an age thing. I like Mats, I like him a lot. I see the wisdom in the trade, even if there's a part of me that will never forgive him for it. Rational thought is not the domain of the typical fan.

And the PING moment was freaking awesome. 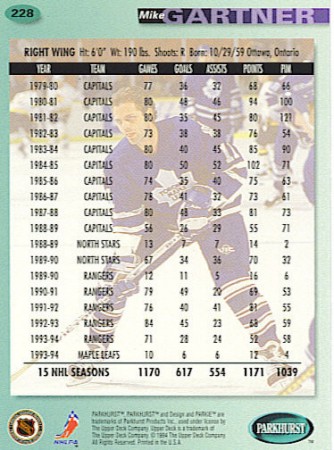