Biggs assisted on the opening goal of the game, but the Generals couldn't keep up with the East leading Bulls and lost 5-2 despite putting 41 shots on Malcolm Subban. The loss made the 3rd seed the Generals playoff spot, giving them home ice for the first round.

Biggs was scratched for the game with other Vets as the Generals visited the dead last 67's and beat them in a shootout.

Biggs and other Vets were scratched again as the Generals have their seeding wrapped up already.

The Oshawa Generals will play the Niagara IceDogs in the OHL Eastern Quarter-Finals beginning on March 22nd. this will be the third year in a row these two teams have met in the playoffs, with the IceDogs winning both series (10/11 - 5 games in the semi-finals, 11/12 6 games in the quarter-finals). This year Oshawa is coming into the series as the favoured team, having home ice in the series. on a personal note, I was at the past two series and they were the best hockey experience I've had. Great crowds on both sides and tension clouding the air (unless we get a warm spell, then it's fog on the ice in the dilapidated Niagara barn). 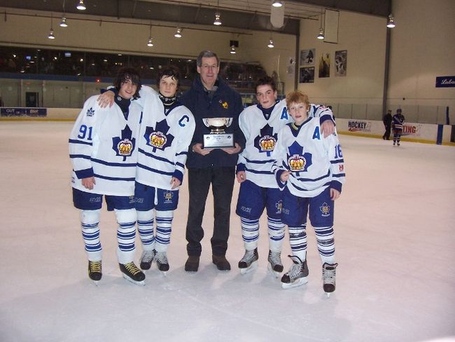 (Brown is on the far right, Matt Finn is beside him)

Connor had a slashing minor with :20 seconds left to go, and no points as the Knights beat the Otters 3-1

Connor Brown had no points as the Otters dropped the decision 2-1 in OT to Guelph.

Brown had 2 goals, including the game tying goal in the 3rd period as the Otters ended their bad, but better than last year, season at home in a 5-4 OT win over Guelph.

Connor Browns season in the OHL is over, it's wait and see if he will join the Marlies for the remainder of the year.

Rupert assisted on the game winner and the Knights got coach Dale Hunter 1 step closer to 500 wins in the OHL by beating the Erie Otters 3-1.

Rupert had one assist as the Knights got a taste of their first round opponents and beat the Spirit 3-2 in Overtime.

Rupert assisted on Londons first two goals of the game, as the Knights beat the Greyhounds 6-2 in their regular season finale.

London opens the first round and their defense of the J. Ross Robertson Cup and OHL representatives in the Memorial Cup against the Saginaw Spirit on March 22nd. Saginaw finished with 71 points, 32 behind Londons 103. this will be Londons warm up to stronger opponents down the road, i personally don't see this series taking longer than 5 games.

Leivo opened the scoring and potted a second goal in the first period, assisted in the third as the Rangers beat the Spirit 7-1.

After a ride that isn't as long as i thought, but cutting through Michigan helps I suppose, the Rangers arrived in the Soo for their season finale. Leivo had 1 goal in the Rangers 6-47 loss to the Greyhounds.

The Rangers will kick off their playoffs with a first round matchup hosting the Guelph Storm. Proximity plays into rivalry and while you could have gotten closer before in the O, Brampton and Mississauga were able to toss rocks and hit each others barns, these two are now two of the closest and the players certainly feel the rivalry. Both teams were close in the standing this season, separated by just four points. No games for 5 days will let injuries heal and allow the players to ready them solves, as they start the playoffs with one hell of a fight.

Matt Finn is out 4-6 weeks with a knee injury

Sparks made 40 saves on 41 shots as the Storm won their final regular season game at home 2-1 in OT over the Otters.

Sparks stayed behind in Guelph to rest, and the Storm lost to the Otters 5-4 in OT in their regular season finale.

The Guelph Storm will face rivals Kitchener Rangers in a series that's easy on the travel. The team will be without Captain Matt Finn, and while it is a loss, it's something the team is used to, Finn was off ice for 6 weeks with mono before he was injured only a few games back. It will be a hard series to open the playoffs with, but a good one for the fans.

Broll came back from being scratched and gave a -4 and double minor (checking to the head) performance in the Greyhounds 8-0 blowout to the hot Plymouth Whalers. The game was a bit out of hand in the first, with 20 penalties being called.

Broll was not a factor in the game, no points and a -2. He's been scratched recently and coach Keefe has said he wants more from his veteran players like Broll.

The Greyhounds ended their regular season hosting back to back regular season champions, London Knights. Broll had no points and a roughing penalty in the contest.

Sault Ste. Marie is the sixth seed in the OHL West and will face a strong Owen Sound Attack team on the 21st. The Greyhounds have taken off under new coach Sheldon O'Keefe and having the 3rd highest scoring player (Nick Cousins, 27G-76A - 103pts) in the OHL own't hurt, but it's a long road ahead for the Greyhounds, and not just in the sense that their all alone up North.

Ending their season against the bottom of the barrel, the Steelheads showed they were not completely out of their season ending slide (1-6-0-3 in the final 10 games) that almost cost them a playoff spot by almost giving up a lead in the third to Ottawa. Percy had the game winning goal and was a +3 in the game.

The Steelheads are in trouble, going 1-6-0-3 in their final 10, losing to both Kingston and Peterborough who they were fighting for a playoff spot, and only getting the eight seed because the Petes lost to Brampton on the final day of the regular season. Now they will face Malcolm Subban and the Belleville Bulls in the OHL East Quarter-Finals. The Steelheads will be lucky to not be swept after the ending to their season. 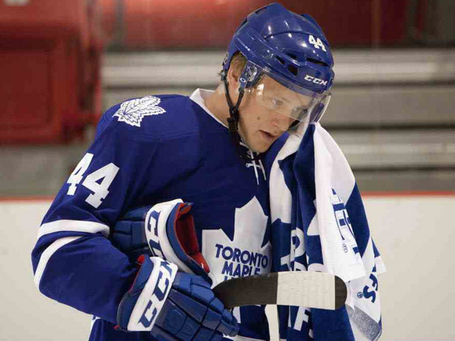 Rielly made two assists on for then Warriros including on the game winner as Moose Jaw ended their home season with a 5-2 win over the Brandon Wheat Kings.

The Warriors ended with a 2-1 shootout loss to Brandon, Rielly putting straight 0's across the scoresheet.

Morgan Rielly will join the Toronto Marlies on Wednesday, extending his season and working out in the Leafs/Eakins systems will help since next season he's either a Leaf or it's back to Moose Jaw

"Any time I’ve gone to Toronto they’ve always told me that they drafted me for a reason — it’s because of what I am able do with the puck. That’s what they ask me to do," said Rielly. "I want to play hard every night and try to get better."

The USHL season runs until mid-April, but right now the Force are the Second seed in USHL West, and would receive bye to semi-finals.

1 assist for Dominic as the Force fell in a 3-2 shootout loss. 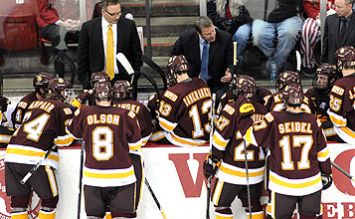 The Bulldogs lost to 4-1 to Wisconson and lost the best of 3 series 2-0. Tony was blanked again, no points.

Knodel assisted on UNH's first goal of the game but the Wildcats couldn't win it, losing the series opener 3-2.

Knodel had no points but the Wildcats tied the series 1-1 with a 4-1 victory over Providence.

No points again and the Wildcvats were ousted from the playoffs with a 3-2 Providence win.

10 Goals and 10 assists for Knodel in his Jr year.

No points for Andrew as the Fighting Sioux jumped out to a 5-3 win and 1-0 series lead over Michigan Tech.

No points again and Michigan Tech ties the series 1-1 with a 2-1 victory.

MacWilliam assisted on UND's 3rd goal of the game and the Fighting Sioux become our second team to advance to the second round of the playoffs, beating Michigan Tech 6-0.

North Dakota will play Colorado College on the 21st in the WCHA "Final Five" which I don't understand the name because there are 6 teams playing, but hey it's the NCAA, so, whatever man.

If they beat CC they will play Minnesota in the second round, and then one of Minnesota State/Wisconson/St. Cloud State in the finals for the WCHA's automatic berth in the Frozen Four tournament

Assisted on Browns first goal of the game, but the Bears couldn't over come the Engineers and lost 6-2, forcing a game 3.

Robertson assisted on the Bears first goal, and they took a 3-0 lead and held on despite RPI coming up with 2 goals, and will advance to the ECAC semi finals for the first time since 2010.

Brown will play Quinnipiac in the semifinals and if they win they will play the winner of Union v Yale for the ECAC championship.

the tournament will take place this weekend in Atlantic City if anyone wants a road trip.