The Leafs are closing in on a playoff spot. Follow along!

With a blown lead that turned into a come from behind regulation win last night over the Carolina Hurricanes the Leafs did themselves a world of good. Here are the standings today: 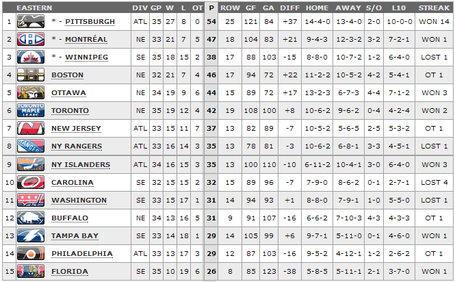 Firstly, the Leafs separated the Islanders and Carolina which makes thinking about 9th place easier without the Southeast division mucking things up.

The Islanders are on pace for 49pts this season. The reason I'm estimating 52pts is that it's likely that three point games increase as teams on the bubble tighten up their games.

The Leafs won't have an opportunity to pick up their fifth win tonight but the lone Eastern Conference game has an interesting implication for Toronto. The Tampa Bay Lightning host the New Jersey Devils. New Jersey are five points back from the Leafs but with two games in hand. A Tampa win in regulation starts to open a gap between 6th and 7th.

I'm still not sold on these probabilities, but what the heck right? via Sportsclubstats: 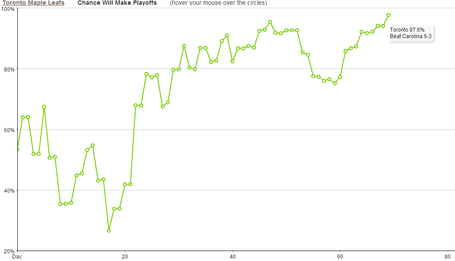 The best news of this simulation? Sportsclubstats thinks the Leafs have a 51% chance of finishing 6th in the East. Be careful what you wish for I suppose, but finishing 5th means we'd face Boston or Montreal and finishing 7th means Boston, Montreal or Pittsburgh. Bring on Winnipeg.