Last night the Devils lost in a shootout to Tampa which means that Toronto is four points clear of seventh though the Devils have a game in hand: 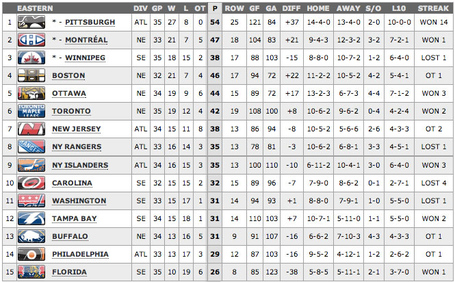 Obviously the most important game tonight is for the Leafs to win in regulation which would tie them points wise with Ottawa though the Sens would stay in 5th due to having a game in hand.

From Sportsclubstats we want the following teams to win:

We don't really care about:

So, most important for tonight is for the Leafs to win their game. Five wins and thirteen chances to get them. Go Leafs go.