The Toronto Maple Leafs have traded Mike Brown to the Edmonton Oilers for a conditional 4th round pick (3rd if the Oilers make the playoffs!). Who won the trade? Who lost? Let's discuss

The Toronto Maple Leafs made room for Matt Frattin's imminent return by trading Mike Brown to the Edmonton Oilers for a fourth round draft pick in 2014 which could improve to (please stifle your laughter) to a 3rd round pick if the Oilers make the playoffs.

Leafs get fourth round pick from Oilers for Mike Brown. One puncher had to go and that's a good return. Probably makes Orr/McLaren regulars.

To begin I'd like to say that of our three face punchers (Brown, Orr, McLaren) Mike Brown was my favorite. I thought he was the best skater of the three and I liked his moustache and he's not a terrible human being like Tyler Bozak.

Mike Brown was an excellent ambassador for Movember and seemed to be a decent fourth liner. While writing this I pulled up his usage chart: 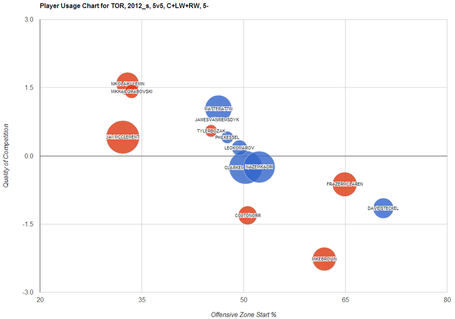 Which paints a pretty poor picture of him actually. In the end he wasn't seeing much ice time in Toronto and I'm happy we got a conditional pick for him.

Best of luck in Edmonton, Mike.

The majority of Oilers fans who have been clamouring for the Oilers to get more grit and to get tougher (despite plenty of 'grit' and 'toughness' being on the roster) rather than adding things like 'skill at hockey' are overjoyed. They're lighting up Twitter talking about how great it is that they've added Mike Brown. He is no way solves their main problems - lack of NHL quality defencemen, better puck luck - but he does tick off the boxes that will keep the local media and braying fans at bay.

Some of the less pugilistically inclined fans are not pleased. at. all. A quick look at their roster shows that there aren't many wingers that Mike Brown would be an upgrade over and there's the possibility that an actual hockey player will be sacrificed on the altar of toughness by being sent down to Oklahoma.

Thanks to Big Daddy D's draft spreadsheet we know that a 4th rounder generally isn't that valuable. Odds are that Mike Brown will be much more than that potential 4th rounder. However, we also know that the Leafs have a few fourth rounders on their roster. And we also know that one important aspect of success is to try to stack the odds in your favour as often as possible. Giving away draft picks for a probably below replacement level is not the best way of doing so.

Before we get all giggly, let's not forget that this means that Colton Orr and Frazer McLaren will be dressing every game at least until Joffrey Lupul's arm is fully healed. The Leafs did trade the one of the three that had the highest value although that seems like a world's tallest midget. I like to think that the Leafs added the playoffs condition just to screw with Tambo but he wasn't smart enough to clue in.

The good news is obviously that this means that Frattin will be in the lineup and that we're down to two below replacement value players. Randy Carlyle will apparently always dress at least one so we're 50% to the optimal state. Lupul's recovery seems to be progressing well so the Leafs' should keep improving their forwards.

This week's league-wide PDO post from NHL Numbers isn't up but last week's installment had the Oilers with the worst PDO at 974 which is driven in large part by a 5.2 SH% and the Leafs with the third highest PDO at 1030. You can get a good understanding of PDO by reading this primer by Cam Charron but basically, both teams are at levels where you would expect them to have decent sized shifts over the remainder of the season.

The Leafs' will probably come down which means a combination of their shooting percentage and save percentage will decrease and they may lose more games as a result and the Oilers are on the opposite side of the coin. Of course, the timelines over which this may happen and the relative impact are not certain.

However, if it comes to pass then you can sure as hell expect to hear all about how Mike Brown changed the Oilers' season with his mere presence on the bench (and that's where he'll be for the vast majority of the time) and how the Leafs are dummies for letting his 4:39 of ice-time per game go to some soft as dog shit player like Matt Frattin.