On The Maple Leafs Defence: Is The Leafs' "D" Going To Improve?

Share All sharing options for: On The Maple Leafs Defence: Is The Leafs' "D" Going To Improve?

Leafs fans may not be finished biting their nails about whether James Reimer can continue to provide average (or, dare I say it, above average) goaltending, but most of us around here have turned to look at the Leafs' defence corps as the team's weakest link.

Before Nonis & Co. explore the trade route (and I am by no means suggesting they shouldn't), the responsible thing to do is to take inventory of what they have in their current players, and what we might expect them to look like in the months and years ahead. Can we expect them to improve, decline, or continue competing with about the same amount of success as they are having now? The answer lies in whether or not we believe that the Leafs' defenders are in the process of improving or declining.

Naturally, different players develop at different rates, and many stalwart defenseman have bloomed earlier or later than expected, but it seems to be that many people assume that it takes longer to teach the defensive side of the game than it does the offensive side.

For most of us who play the game, this assertion aligns with our experience, as well as common sense. Defensemen don't need to skate as hard as wingers, and nowhere near as hard as centremen. Rather, they are expected to play a more cerebral game, reading plays, being positionally solid, and making safe decisions with the puck. Sounds like a job you'd entrust to your parents, right?

The question now becomes a little more broad: when do most defensemen peak? Is it really that much later than forwards? Quite frankly, I have some doubts.

As Leafs fans, the conversation about Roberto Luongo's longevity in the NHL should be fresh in your minds, and it is relevant to the discussion about defensemen. Over at The Leafs Nation, I pointed out (using admittedly crude math) that most goalies seem to peak at about 28 years of age, but because of attrition, the average save percentage by age (our best single-number proxy for performance) doesn't drop off. Eric T at NHL Numbers makes a more thorough argument, and concludes it thusly:

But the overall result is exactly the same: goalies do decline with age, and the goalies who have long careers are the ones who are better than average to begin with and so can withstand more decline and remain viable NHL options.

I believe that it is exactly the same situation with defensemen. Looking at top pairings, it's easy to be fooled by survivorship bias and conclude that defenders are like fine wines. In fact, I looked at the average age of top-two defensemen for each NHL team between the last two lockouts and found that it was 28.06 years. Weighting the average age for time on ice only gives us a slightly different 28.11 years.

If we are going to use one number to look at who the best defenders in the league really are, it makes sense to use time on ice. Point totals don't vary all that much by age group, the "Old Man Lidstrom effect" notwithstanding. Same goes for Zach Bogosian, who is the only player to fall into Hockey Reference's category for 18 year olds for this time period. Even with 14 years worth of data, the sample sizes in the very early and very late stages of careers get too small to be truly representative. 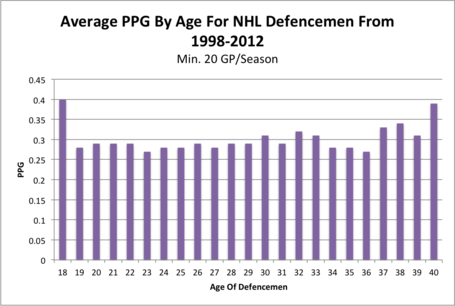 On the other hand, if we take a look at the ups and downs of average time on ice, we can start to see some patterns emerging: 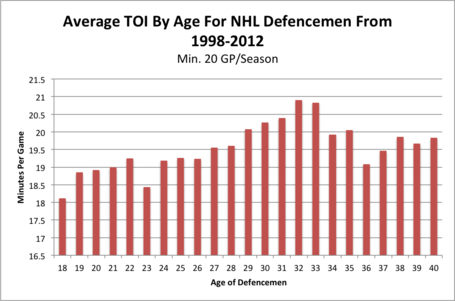 Now, ideally, we could look at the career trajectory of many of these players, and see where their ice time peaked. The problem, however, is that time on ice was only tracked by the NHL from 1998-99 on, and therefore, we still have a relatively incomplete picture of how some of the older, more accomplished players were used in their younger years, and we haven't seen how some of the older players will finish their careers. Tyler Dellow looked at this issue a little while ago, but only had a small pool of players to make a comparison with.

If we simply look at who is capable of playing in the NHL, however, we can see that 25 year olds represent the largest group: 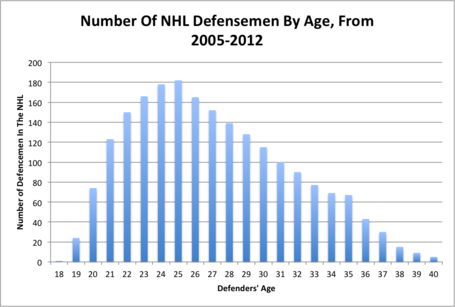 I've only used inter-lockout years in this instance, as the pattern becomes pretty evident even with less data. Simply put, there aren't many Lidstroms, Bourques, or even Chelioses out there.

The pattern might be explained by several factors. 25 years of age seems to be a physical peak for hockey players, and as soon as they begin declining physically, defenders' ability, or lack thereof, to read the play will determine their career longevity. Another factor might simply be that younger players are cheaper, and, if the level of play is equal, why employ a more expensive veteran?

Looking at the total TOI played by each age group throughout those inter-lockout years looks like this: 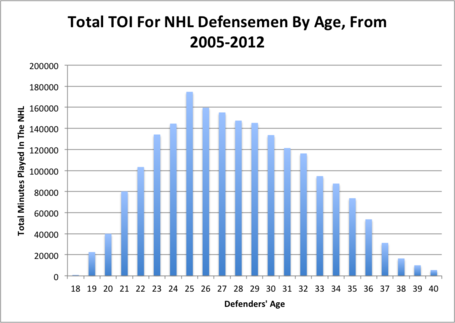 This graph, when contrasted with the one immediately above, shows how players over the age of 25 begin to take up more ice time per player, as the "curve" of the bar graph drops off less dramatically. This leads us back in a circle to my earlier point out Luongo, and how survivorship bias is affecting our perception of where a defender's peak really is.

OK, Get On With It

For the moment, the answer to a defenceman's performance peak is twofold. First, 25 years of age appears to be a physical peak for NHL skaters - both forwards and defenders - though I would submit that this may be more important for forwards, who do a lot more skating, and thus see their production peak at roughly 25 as well. The other half of the answer is that since point production is less of a priority for defenders, and a coach's trust is slowly earned (unless your name is Mike Kostka), ice time doesn't drop off as soon as point production does.

A defender's longevity seems to depend on the type of player - no, not whether or not they are "shut down", "PP quarterbacks", or "puck movers" - but rather to the extent to which they rely on their physical strength and speed to make plays, or cover up mistakes of a more cerebral nature. That hard-hitting defender with poor defensive zone awareness? He's all the more likely to get bounced from the bigs when his legs start to go.

So What About The Leafs, Specifically?

Well, how old are they? Let's have a look:

I think it's fair to say that any defender over the age of 30 isn't likely to be improving. Mike Komisarek has been terrible for a few years now, and I don't think anyone expects any real skill development to happen, here.

Again, being over 30 means that Liles' game probably isn't dramatically improving, but since he's a player that has been the league since 2003-04 and has played with some consistency, he's likely to see his career fade a lot slower than some others. Ideally, we'll see him become more defensively responsible as his wheels start to go, but I have some pretty serious reservations about that happening.

My gut tells me that Kostka is a man who is roughly in his physical prime, and can probably learn a bit more about life in the NHL. For us as fans, I think we'll see two things happening at once to his game that will make it difficult to say by how much he's improving. First, since he's likely still adjusting to a new level of competition, he's likely to start closing some gaps in his positional game, but at the same time, his shortcomings are going to become more and more obvious the more we see them.

Ah, Gunnar. I really like to think that he's got a bit of growing left to do, even if he is already 26. The injury to his hip may take the wind out of his sails for this season, but last season he showed very solid positional play, and the awareness to make safe passes. Given that he took a while to break into the league, it's hard to hope for much for his career development curve, but given the current state of the Leafs' "D" corps, Randy Carlyle better hope that Gunnar is here to stay.

Phaneuf has seen his game evolve dramatically since being traded to the Leafs. Maybe it's because he's been forced to play with plugs that he's learned to be more defensively responsible, but I'm glad to see the man become a more well-rounded defender. He still knows how to lower the boom, but also has shown some restraint when it comes to pinching. Maybe he's not "improving", since he won't be putting up any 20 goal seasons with the Leafs, but then, the Leafs need more focus on defence than they do on offence. If Phaneuf continues on with this change, we'll be happy MLSE is paying him $6.5M.

This guy seems to do well with every opportunity he is afforded, and yet can't seem to win a coach's trust. Let's hope that this season is a turning point in his career. Currently, he is leading all Leafs' defenders in Corsi On and Corsi Rel, which gives me hope that he is still rounding into form.

The man doesn't look close to holding down an NHL roster spot, and yet Carlyle keeps him here. He has easily been the Leafs' biggest hole on defence - a boat anchor for Phaneuf - though given his age, he still might have some room for improvement. Maybe, just maybe, this is a player who could fill a 6th or 7th defender role in a year or two.