Things were better* in my day

* "Better" is a subjective term and is so context-dependent as to be largely meaningless. Many things described as "better" might not actually be better at all, just familiar and thus comforting. YMMV.

Share All sharing options for: Things were better* in my day 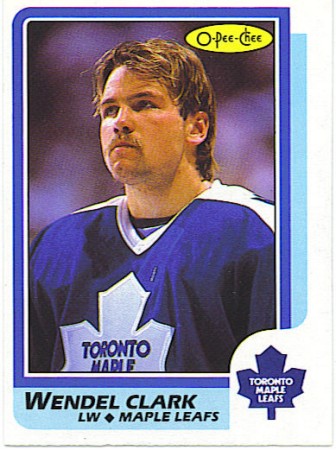 Yesterday's fighting piece was largely an effort in smashing through a case of writer's block and I knew as I posted it that the piece had some holes and sections that I wasn't dead happy with. That said, it generated a criticism that I didn't see coming:

Having watched hockey since the late 70s, I do find this memory of the "policemen" to be much over-romanticized. Its the "Dave Semenko Theory of Protection." The one that says Wayne Gretzky got more "space" because Semenko was so scary that people stayed away from Gretzky. That’s basically silly. People went after Gretzky all the time.

I've reread the piece and quite frankly, he's right. That sense does come through. In trying to make the points I was trying to make, I made use of some standard-issue storylines about "the honour of the good old days" to an extent that really isn't supportable by anything I actually watched.

It's a criticism that stings a bit because it's one I'm particularly vulnerable to. I spend much of my free time wading around in history and I consider myself at least comparatively well-versed in it. I should be generally better at expressing it without the cloud of someone else's loaded narratives.

It's very difficult to talk about the past without making some form of value judgement. Whether consciously or unconsciously, we're making some form of comparison between where we are and where were and judging both the then and the now accordingly. I've long been a proponent of the idea that you can't understand where you are without a real sense of where you've been, but central to this is the need to portray and understand where you've been both honestly and accurately. Viewing either your past or your present through rose-coloured glasses - while potentially comforting and maybe understandable - is dishonest.

To me, I find most aspects of the past to be simultaneously better and worse than they're reputed to be. People still made good choices and bad choices and rose to great heights and killed too many of their brethren for no good reason. We are those people and they are us.

What I find interesting are the stories of who people were, how they lived, what they did, what they created and what they left behind. People are clever (when they're not stupid) and made do with lesser things in ingenious ways. Many things worked far better than we expect, particularly in their original state, before they wore out and were thrown away for the rest of us to find later.

What does any of this have to do with a hockey blog?

As we saw yesterday, we discuss the current state of hockey through the filter of how the game used to be played. Depending on your take, hockey can be much better than it was or it can lack the magic it once had. It could be both.

We hear quite often that today's athletes are significantly better than the ones of even 20 years ago and certainly better than those who toiled 40, 50, 80 or 100 years ago. By almost any measure, this basically has to be true. They're bigger, they're stronger, they train physically all the time and they have a degree of training in the sport that simply didn't exist before. Coaches have an incredible array of tools at their disposal that can take a game that was basically an art and make it much more of a science.

Beyond that, changes in equipment have made the game faster: skates are lighter and stiffer, padding is tougher and lighter, composite sticks have increased everyone's shot (or at least it is reputed to have done so). The game, while still familiar, is quite different to the one played 30 years ago.

Is it better? That's hard to say. What is better? Better is subjective.

Coaches will tell you a great game is one in which no mistakes were made. A lot of fans would find that boring. Howie Meeker, who played in the 40s, coached in the 50s and analyzed in the 70s and 80s, recently said that the speed of the modern game was such that players didn't think as well as they once had because there simply isn't time to do more than react. This both led to and is a function of the reliance on systems. Is he right? I haven't the slightest idea.

People will couch their criticism of the modern game in moral terms. There's too much money in it now, players used to play for the love of the game and they respected each other more. This is nonsense. From the moment players were first paid or the first ticket was sold, sports has been about money. Players played for fun as kids, but as adults, it offered a life that didn't involve the local mill or mine, plus a shot at decent money and prestige that wouldn't come otherwise. The stitches and scars on old players tell you about the respect they had. This was survival and that guy wanted your job. Ask Ace Bailey about respect.

I like to watch old games when I get a chance. It lets me learn about how it was played and I like to see people that I've only read about or seen on a card. I don't get too much into the question of "this guy couldn't play that game" because it's absurd on its face. Technology and game play have changed so much that to pluck a player out of one context and simply assume success or failure in another is idiocy. Is Crosby better than Gordie Howe? Playing whose game? Using what equipment? Would Sid have to play the long shifts they used to use? Do we assume he keeps his modern fitness level despite playing in 1940s circumstances? There are so many variables that the basic question is nonsense.

I've come to believe that the athletes we had in any era were the ones best suited to the game they were playing and the circumstances in which they played it. Some had a skillset that would translate well to other styles or circumstances, others didn't. I try not to worry about who is better, but rather enjoy people doing what they did.

Why do I care about any of it? I like to see what people did and said. People cared passionately about sport and still do. I like to see the moments that made people stand up and cheer. I like the cards because some kid cared about them, laid them out on the rug while listening to the radio, memorizing all the stats and facts on the back. It's nice to talk about Luke Schenn and remember Gary Nylund. It's nice to realize that when the Leafs don't make the playoffs for years, that we've seen this (or something a lot like it) before and lived to talk about it. It's good to get through a lot of the spin and bull and try to see what really existed because while a lot of it sucked, some of it was kind of cool.

It isn't always easy. I know that I'm kind of compartmentalizing my thought processes when I explain to my kids that fighting isn't the right way to solve problems while "All Heart" is on infinite loop on my laptop. This is where you need to try to explain the concept of context. Sometimes you have to own up and admit that the way we used to view things isn't the way we view them now. Maybe we were wrong then. Maybe we're a little wiser now. Or not.

But you can't know that without knowing what you used to think and understand a little bit of why. Otherwise you're just making it up and while there's a lot of that going on, it doesn't really help.

(Note - the '86-87 Wendel Clark is one of the greatest cards of all time, irrespective of context. Any dissenters are big old poopyheads.) 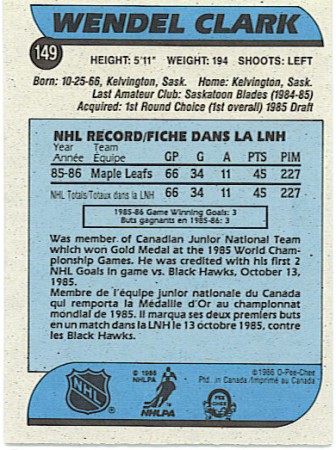