Today marks the beginning of the PPP Trivia Contest! If you want to take part and haven't signed up, please take a moment to do so!

Welcome to the first day of the trivia contest! I have 30 questions made up, from which two will be asked each of the next 15 weekdays. For each question, the first person to post the correct answer gets a point. In the age of Google, it's nigh-on impossible to come up with something that simply can't be found on the internet, but I do hope some of these at least require effort.

Right now, despite a number of people expressing enthusiasm, only a handful have actually bothered to sign up. I request that only those people post. If you know the answer and feel you'd like to have some stuff from the prize lot, please take a minute to donate $2.50 to each of the links below. It's for a good cause:

One benefit to those who did sign up is that I now have far more prizes than potential winners, so participants will get to make more than one pick. It will be at least two and (depending on numbers) likely three, so you're pretty much guaranteed to make your $5 back, particularly since I'm picking up the shipping.

I will highlight one of the prizes each day since, well, why not? 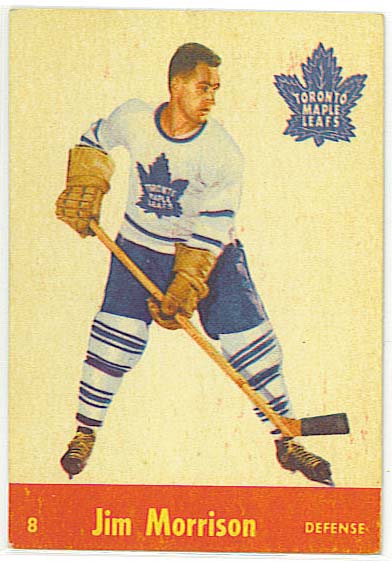 The oldest card available is the 1955-56 Parkhurst Jim Morrison. While not a name that most would know, Jim actually had a very long pro career, spanning 1951-73 and including over 700 games at the NHL level. He was also selected to play in three NHL All-Star games. When his first kick at the NHL wound down during the 1960-61 season, he started a long run as an All-Star AHL defenseman and won the Eddie Shore Trophy in 1966 as the best defender in the AHL. In 1968, the Pittsburgh Penguins gave him another shot at the NHL and he worked their power play for the next two seasons.

1955-56 Parkhurst is a tough set. The cards are prone to age-browning and the red bases wear really badly. This is a very sold EXMT example and if the colours were a tad better, I'd send it off for grading. I've seen lesser examples sent in. The key card in the set is the Jacques Plante RC, which typically runs over $100 for a mashed-up version and many, many times that for a nice one. 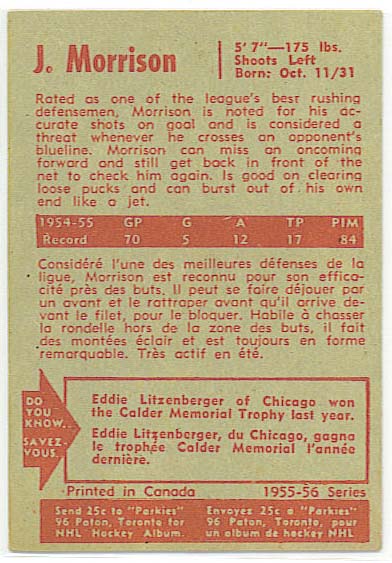 The backs are typical Parkhurst - a very wordy write-up with a fairly minimalistic stat line. The trivia question is kind of cool. This is the only year they would do this. Parkhurst also printed a green-backed version that was included in Quaker Oats products. They run about 3X the price of the regular issue.

Now for the questions:

1. Prior to the arrival of Bobby Orr, who held the single-season NHL record for points by a defenseman?

2. Who was the first defenseman to reach 50 assists in a season?

Post answers below. Thanks for playing and good luck!