Day Two of the PPP Trivia Contest! Know stuff! Win cards! If you want to take part and haven't signed up, please take a moment to do so!

Welcome to the second day of the trivia contest! I have 30 questions made up, from which two will be asked each of the next 15 weekdays. For each question, the first person to post the correct answer gets a point. In the age of Google, it's nigh-on impossible to come up with something that simply can't be found on the internet, but I do hope some of these at least require effort.

We are still taking signups - two joined yesterday to take a run at the questions posted. If you know the answer and feel you'd like to have some stuff from the prize lot, please take a minute to donate $2.50 to each of the links below. It's for a good cause:

One benefit to those who did sign up is that I now have far more prizes than potential winners, so participants will get to make more than one pick. It will be at least two and (depending on numbers) likely three, so you're pretty much guaranteed to make your $5 back, particularly since I'm picking up the shipping.

I don't have time to really do justice to anything that took place in Boston yesterday, but the cards to be highlighted today are both Boston icons. I've always liked the 1975-76 OPC Orr because it's the last card where he is really himself. He's shown in action, still at the absolute top of everything. He'd only play 10 games this season (scoring 18 points) before the knee locked while getting out of a cab. He'd play the 1976 Canada Cup plus a handful of games in Chicago after this, and that would be that. 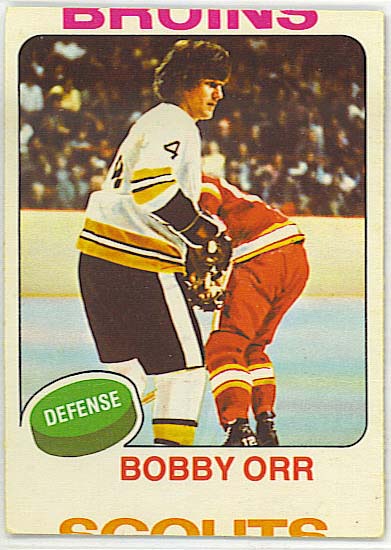 The card is miscut to a degree that's even impressive for OPC, but that's how I was able to acquire it for the competition. The stats are complete and readable and the card in hand is actually in better shape than I expected. There's a minor wrinkle across the bottom third.

The 1980 OPC Yaz is from a set that is much tougher than one would think. There was a strike of some sort that hit production that season and a lot of the cards look as though the machinery was being run by management. Rough cuts, slant cuts, off cuts, these are the norm. This card is kind of remarkable in that it looks like it's supposed to (technically it's a bit of a slant cut, but not horridly so). 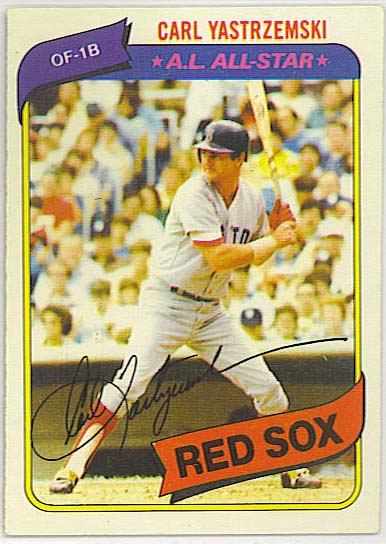 A comment left late yesterday exposed a bit of a loophole that I will now close. Assume that all questions are NHL-based unless I explicitly say otherwise. Still, I'll give credit where it'd due and add a point for Rob Vollman provided he has signed up (I haven't checked).

Today's questions - a first and a last:

3. Who was the first player to play 20 NHL seasons?

4. Who was the last of the WHA players to retire? 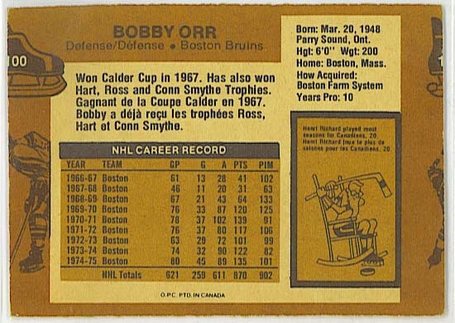 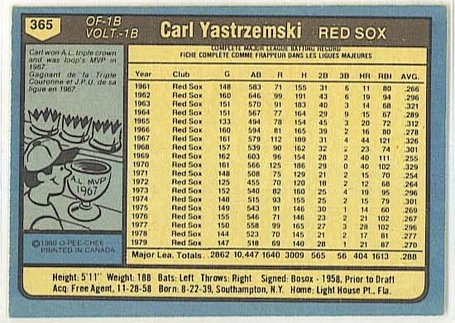