Day Three of the PPP Trivia Contest! Know stuff! Win cards! If you want to take part and haven't signed up, please take a moment to do so!

Welcome to the third day of the trivia contest! I have 30 questions made up, from which two will be asked each of the next 15 weekdays. For each question, the first person to post the correct answer gets a point. In the age of Google, it's nigh-on impossible to come up with something that simply can't be found on the internet, but I do hope some of these at least require effort.

We are still taking signups - were barely started, so there's plenty of time to win. If you know the answer and feel you'd like to have some stuff from the prize lot, please take a minute to donate $2.50 to each of the links below. It's for a good cause:

I'm adding prizes to the hopper on a daily basis (another dozen scanned yesterday but not posted yet). The odds of getting something you like are pretty solid, and I'm not sure yet just how many picks people will get, but it will be multiple. You'll get your $5 out of it.

After two days, we've got a two-way tie at the top of the board, two points each for 'Grabovski's better than you think' and 'Sknut.' What I've seen also tells me I need to steer a bit more clear of things that can be readily derived from the query engine at hockey-reference.com.

Both cards today are of Bobby Clarke and they represent the two seasons he and the Flyers managed to climb the mountain all the way to the top. The first is his '73-74 OPC. It's a first-series card as evidenced by the red borders. It's also the dark-back variation. For reasons that have never been made particularly clear, 1973-74 was printed on two different types of card stock - one light, one dark. There's no real price difference to either (unless you're talking the Larry Robinson RC, which is tough in the dark), but putting together a complete set of one or the other (or worse, both) is a real pain. 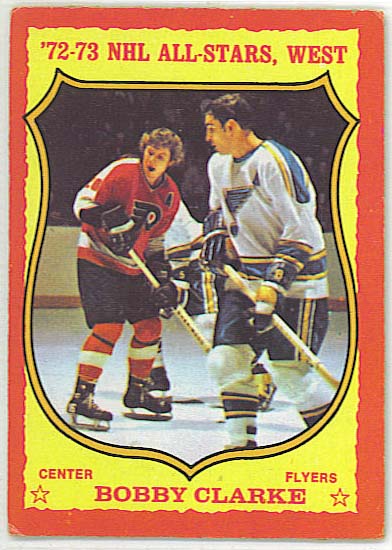 The 1974-75 card is one of the coolest looking because of this picture. I tend to think this is the neatest card Clarke ever had during his playing days. It was produced by Lipton Soup and had to be cut off the back of the box. Always nice when the quality of your item is dependent on the dexterity of a seven-year-old child from almost 40 years ago. There's a small wrinkle on it, but hey, this used to hold powdered soup. 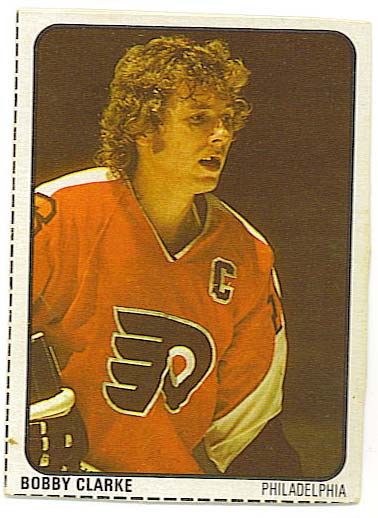 Today, we're doing lines (no, not that kind) - remember - all questions are NHL unless explicitly stated otherwise:

6. Boston had two famous lines named for the ethnicity of their players. Who were the players and what were the lines called?

Bonus - the Hartford Whalers briefly had a line with over 80 seasons of collective experience. Who was on it? 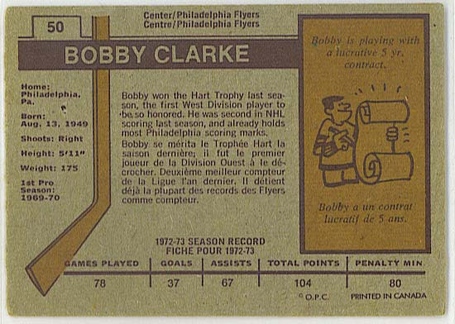 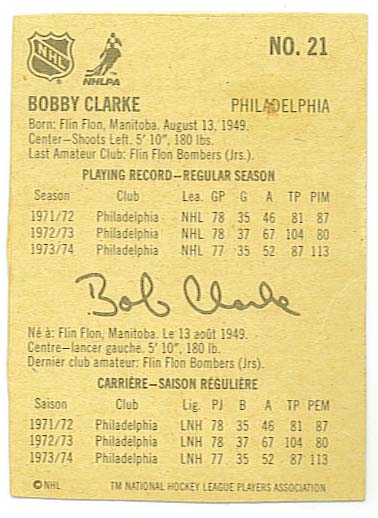