Day Four of the PPP Trivia Contest! Know stuff! Win cards! If you want to take part and haven't signed up, please take a moment to do so! Today it's all about the Seals.

Welcome to the fourth day of the trivia contest! I have 30 questions made up, from which two will be asked each of the next 15 weekdays. For each question, the first person to post the correct answer gets a point. Watching how fast many of the early questions have gone, I'm going to try to come up with stuff that takes a bit more sleuthing.

We are still taking signups - were barely started, so there's plenty of time to win. If you know the answer and feel you'd like to have some stuff from the prize lot, please take a minute to donate $2.50 to each of the links below. It's for a good cause:

From the moment I found out about them, I have loved the Seals. I don't really know why. There's something kind of endearing about that train wreck of a team that just isn't there about other train wrecks. Maybe it's the logo. Anyway, it made me very happy when one of the first requests was for a Seal or two in the prize pack.

The first of these is Bert Marshall. Bert was a solid defensive defenseman who toiled for years with a disastrous Seals team, then moved from the Rangers to a horrid expansion Islanders club for whom he played until they were on the verge of being champions. This 1971-72 OPC card is in great shape and captures the team in their "California Golden Seals" incarnation. 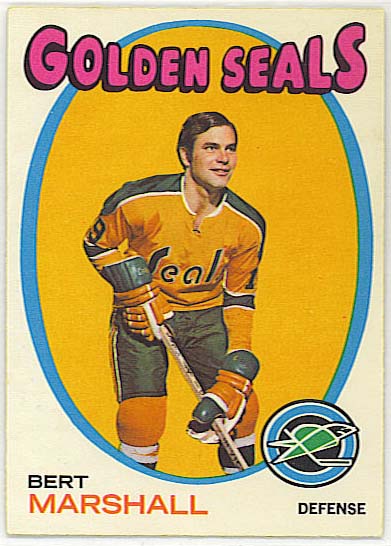 Gary Jarrett (who I always want to call Doug) was a speedy forward who came up through the Leafs system but couldn't get a regular shot. He played in Detroit for a season and then joined the Seals for their most promising year - 1968-69. He contributed more than 20 goals and was a regular until 1971-72, after which he became part of the mass exodus to the WHA. The Leafs were mauled by the WHA but the Seals were flat-out crushed. 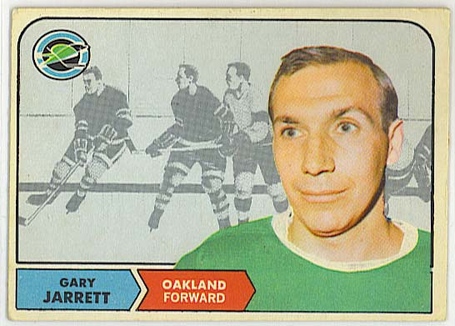 This '68-69 OPC card is from the first year the expansion teams were ever featured. Topps/OPC didn't bother with the new teams in 1967-68 as I presume the photography was just too much for them to deal with.

7 - One of the things that always killed the Seals was the lack of high-end offensive talent, yet three former Seals went on to score >50 goals with other teams, two of them even reaching 60. Who were the three players?

8 - Who was the last active NHL player who played for the Seals?

Bonus - what member of the Seals' front office went on to become a multiple Cup-winning GM?

Grabovski's better than you think - 2

Joanie loves Chachi - 1 <-- for the record, I hated that show 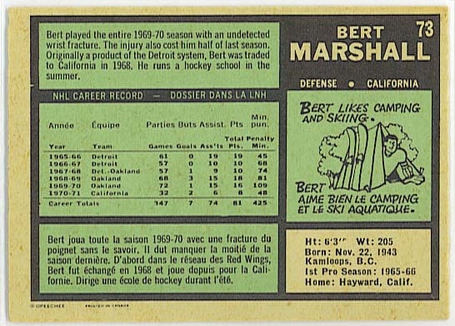 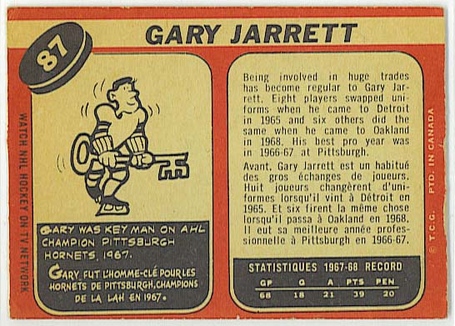