Day Seven of the PPP Trivia Contest! Know stuff! Win cards! If you want to take part and haven't signed up, please take a moment to do so! Today we have what might be the best goaltending performance in Leaf history.

Welcome to the seventh day of the trivia contest! This may yet be the one where things post right when and where I expect them to! The Leafs have made the playoffs, proving that absolutely anything is possible.

I have 30 questions made up, from which two will be asked each weekday. For each question, the first person to post the correct answer gets a point. I will do my best to ensure that these post at a common time. I know it's annoying when you find it and the answers are already there. I keep hoping for a question that will at least take a couple hours, but no such luck yet.

We are still taking signups - were only a third of the way in, so there's plenty of time to join up and win (although the way sknut and Grabovski's better than you think are going, the competition may be for third). If you know the answer and feel you'd like to have some stuff from the prize lot, please take a minute to donate $2.50 to each of the links below. It's for a good cause:

I'm adding prizes to the hopper on a regular basis (scans to be added to the prize list ASAP - really). The odds of getting something you like are pretty solid, and I'm not sure yet just how many picks people will get, but it will be multiple. You'll get your $5 out of it.

The target time for all question posts is 11:00 a.m. My track record at reaching this time has been abysmal. However, I will post a Twitter warning 30 minutes or so before these things post. That might help.

Short on time last time (and this time, for what it's worth), I didn't get to acknowledge the fact that PLAYOFFS! Grammatically impure, yes, but it has been a long time. People talk about what has happened to the world since 2004. I watched that series with my 14-month-old daughter. She is now 10 and the eldest of six.

How did our house react?

Anyhow, it is a testament to the fact that no matter what the particular shortcomings of your team, a remarkable goaltending performance can hide a multitude of sins. Yes, it may be ultimately unsustainable, but the question is whether it can be sustainable just long enough....

When talking of great Leaf goaltending, there is one season that should be remembered far more than it is - and it's the one Jacques Plante put together the year this card came out. I won't go into all the specifics because it's done rather well right here, but the summary is 1.88, .942, 42 years old.

I am older than Jacques was at the time this picture was taken. I take solace in the fact that he looks 10 years older than me. 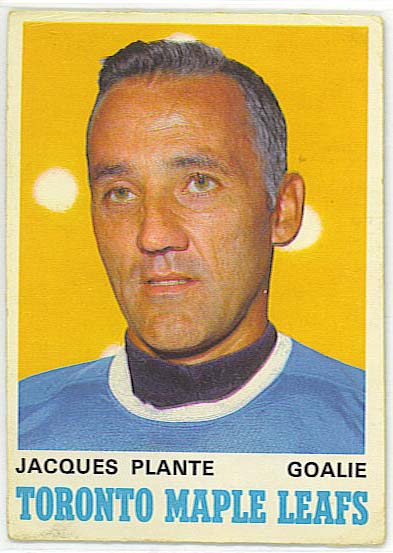 Paul Henderson also had a very good season in 1970-71, scoring 30 goals for the first time (he'd peak at 38 in 1971-72) and hitting an NHL high of 60 points. Paul, as we have seen elsewhere, had a knack for timely goals, though on the back of this card, it may be the only occasion I've seen someone recognized for a knack for hitting goal posts. 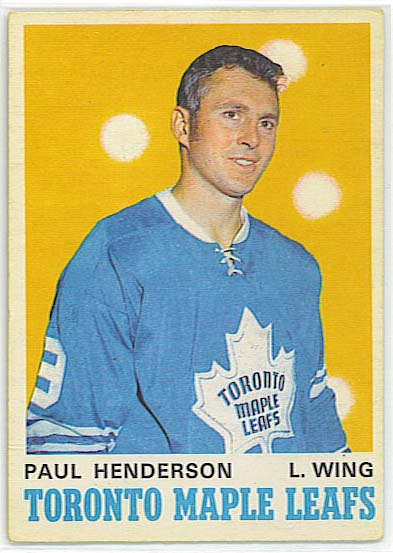 This is also the first card that was ever featured in a Leaf of the Day post. I think the full text was "today's Leaf is Paul Henderson." Then I got wordy.

13. The Leafs have had three goalies that at some point in their career held the single-seasons record for games played by a goaltender (where said total >70). Who were they?

Grabovski's better than you think - 7 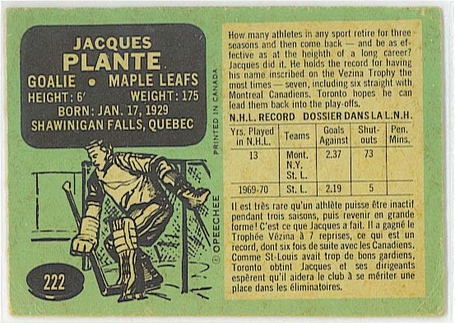 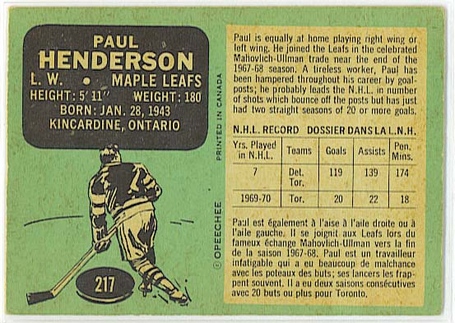