Day Nine of the PPP Trivia Contest! Know stuff! Win cards! If you want to take part and haven't signed up, please take a moment to do so! We profile a couple of Hawks legends today.

Welcome to the ninth day of the trivia contest! I have 30 questions made up, from which two will be asked each weekday. For each question, the first person to post the correct answer gets a point.

We are still taking signups - I think at this point it's pretty clear that draft slots one and two will be going to some combination of sknut and Grabovski's better than you think, but there are plenty of decent things in the prize lot and they can't get all of them. :)

If you know an answer and feel you'd like to have some prizes, please take a minute to donate $2.50 to each of the links below. I've got way more prizes than people, so come snag something. It's for a good cause:

I'm adding more prizes to the hopper on a regular basis (scans to be added to the prize list ASAP - really). The odds of getting something you like are pretty solid, and I'm not sure yet just how many picks people will get, but it will be multiple. You'll get your $5 out of it.

The target time for all question posts is 11:00 a.m. My track record at reaching this time has been abysmal. I always start out well, but getting finished takes some time. I will post a Twitter warning about half an hour before the post will appear, so this might help a bit.

I wanted to mention how I think the final prize thing will work. What we are playing for here is draft order. Everyone who is involved will be part of the draft irrespective of having any points at all. Tied participants will go into a randomizer to set priority. When the contest is over, we'll have a draft thread. Selections will go one at a time, so everyone should get something relatively high on their list. I'm not sure how many rounds there will be. Several, at least.

Couple of Hall-of-Famers in the profile today. These were two of the key performers of the 1960s and neither is really talked about as much today as one would think.

It's hard to imagine how Stan Mikita might be underrated, but you rarely hear him mentioned when people talk of the greats. All he did was put together a 10-year stretch as arguably the best centre in hockey. Eight times between 1961-62 and 1969-70, he was a first (6X) or second (2X) all-star, competing with the likes of Beliveau, Delvecchio, Esposito, etc. He was top-5 in assists 8 straight years, top-5 in goals six times, twice set an NHL single-season assists record and set a new single-season points record once. Four Art Ross Trophies, two Harts, two Byngs - it's pretty amazing.

Yet the most amazing thing to me is that while he got those two Byngs, he also had five seasons near the top of the NHL penalty parade. The story, apparently, is that his young daughter asked why daddy always had to sit away from the rest of the players and didn't get to play. He decided at that moment to clean up his act and went from 154 minutes in the box to 58 and then to just 12 - all without sacrificing the quality of his play. 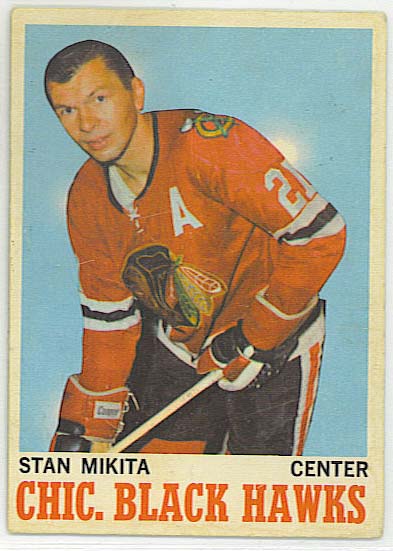 Harry Howell made the comment that he was glad to win the 1967 Norris because the trophy was going to belong to Orr for the next decade. The player whose legacy probably suffered the most from Orr's arrival wasn't so much Howell, though, as it was Pierre Pilote. He was the premier offensive defenseman for most of the 1960s, particularly with Red Kelly's move to centre once joining the Leafs. He held the single-season points record for defensemen and won three straight Norris trophies in 1963, 1964 and 1965. He was a first (5x) or second (3x) all-star eight straight seasons.

What isn't clear just by looking at his numbers is what his margin of victory was. In 1964-65, his 59-point season, he outscored all other defensemen by 24 points. There were only 8 defensemen in total who even scored 24 points, and that was the difference beteween Pierre and that year's #2 scorer, Ted Green (surprise). In 1965-66, he led all defensemen again despite only dressing for 51 games.

In all, he led NHL defensemen in scoring five times and is the leading scorer among all defensemen between 1950-51 and 1969-70 (note that this timeline does no favours to Doug Harvey). 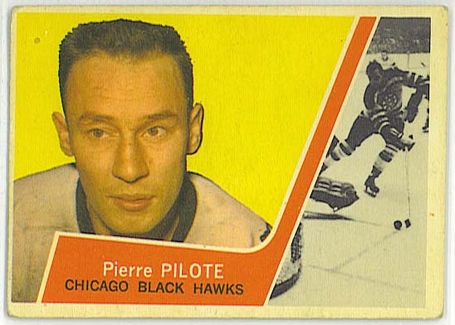 It would have been nice if Topps matched the game-action shot to the player on the card. Out of 66 cards in this set, they nailed it once (Glenn Hall).

18. Who won the Hart Trophy while playing for a team that set an NHL record for losses?

Grabovski's better than you think - 8 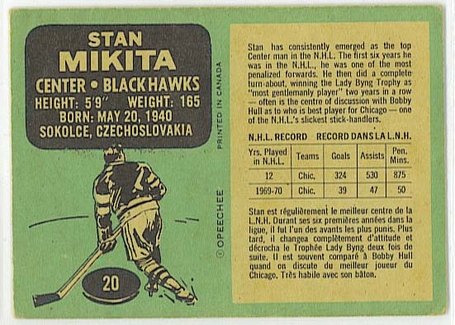 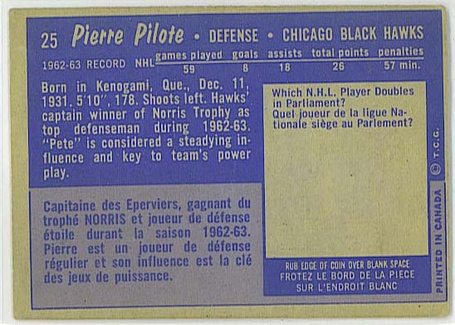