Day ten of the PPP Trivia Contest! Know stuff! Win cards! If you want to take part and haven't signed up, please take a moment to do so!

Welcome to the tenth day of the trivia contest! I have 30 questions made up, from which two will be asked each weekday. For each question, the first person to post the correct answer gets a point.

We are still taking signups - I think at this point it's pretty clear that draft slots one and two will be going to some combination of sknut and Grabovski's better than you think, but there are plenty of decent things in the prize lot and they can't get all of them. :)

If you know an answer and feel you'd like to have some prizes, please take a minute to donate $2.50 to each of the links below. I've got way more prizes than people, so come snag something. It's for a good cause:

I'm adding more prizes to the hopper on a regular basis (scans to be added to the prize list ASAP - really). The odds of getting something you like are pretty solid, and I'm not sure yet just how many picks people will get, but it will be multiple. You'll get your $5 out of it.

I've posted the Howe as part of the header a couple of times but never really shown what makes it cool. The 1975-76 WHA set is a really nasty one to put together. It books well more than double what any of the rest of them do and it's for two reasons - a short print run and really, really terrible centering. Finding nice, well-cut examples of this is really trying. 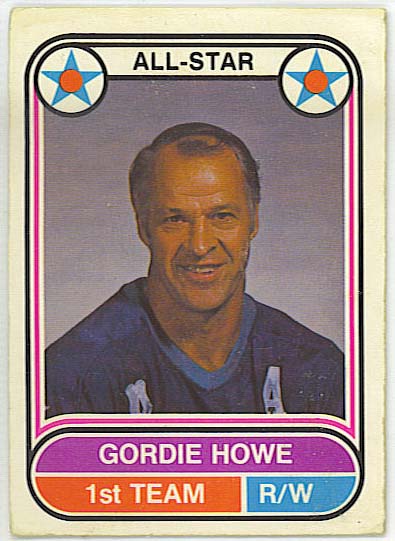 The set did do, though, something that no other set would do for years. On the back of the all-star cards, they showed the full career - both NHL and WHA. For Gordie Howe, this is the only OPC card he'd ever have where you could see the whole thing - 1946-76 (he has a Topps card in 1971-72 that has full stats, but OPC didn't use that one since he'd retired before the season started). Games played and penalty minutes might have been nice, but it's a start. 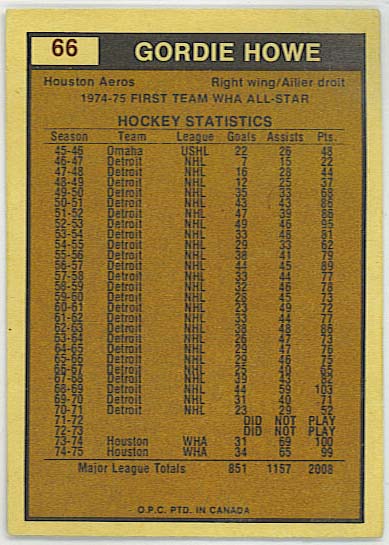 Poul Popeil also has a card in the '75-76 WHA set, but this isn't that card. This is his RC, which is just a really nice example of '65-66 Topps. That set has great colours, a clean look and the ever-important cartoon on the back (don't rub the bit where it says to rub - you'll damage your screen).

Popeil was a solid offensive defenseman who never got much of a chance with the Bruins. He'd get his real break with expansion, putting in a couple years on the Kings' blue line before becoming an inaugural Canuck. He'd then move to Houston, putting in a number of good seasons as a teammate of Gordie Howe. He peaked at 68 points and a plus-53 in 1976-77. 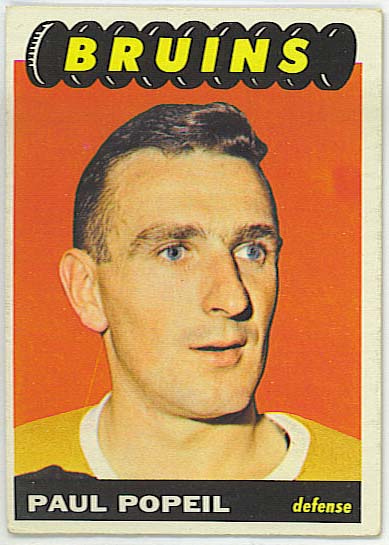 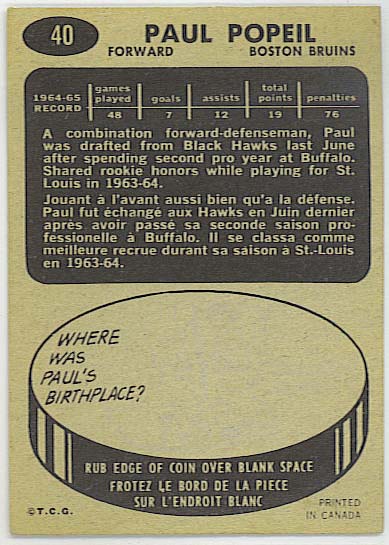 (Just for the record, Popeil is a Dane. Played his junior here, though.)

20. There is only one player in North America to win six consecutive professional hockey championships (both NHL and minor league). Who is he?

Grabovski's better than you think - 8