Day eleven of the PPP Trivia Contest! Know stuff! Win cards! If you want to take part and haven't signed up, please take a moment to do so!

The home stretch begins - welcome to the eleventh day of the trivia contest! I have 30 questions made up, from which two will be asked each weekday. For each question, the first person to post the correct answer gets a point.

We are still taking signups. Why are we taking signups? Well, even if it's going to be a challenge to win slots one and two, there is still an open battle for third and you will easily make your $5 back if you get that spot. Even if you never get a question right, you still get to pick a number of cards from the prize lot and there must be something in there of amusement value.

One of my favourite things about 1970s cards are the goalies. Between the old-style masks and pads that look not unlike something Turk Broda might have worn 30 years earlier, there's just something particularly cool about them. 1979-80 had a lot of great goalie cards. The last cards of Cheevers and Ken Dryden get most of the attention, but these ones are pretty nice, as well.

Dave Dryden was 38 when this card came out and in his last season. While not mentioned anywhere near as much as his younger brother, his career was actually quite a bit longer. Dave played his first NHL game in 1961-62 with the Rangers, but wouldn't see any real action until the later 1960s with Chicago. He was almost 30 before becoming a regular with the Sabres, for whom he played pretty well, but left them after just four years for the money offered in the WHA. Heading into '79-80, Dave was coming of a 63-appearance season with the Oilers in which he'd led the league in GAA and shutouts and backed the Oilers to an Avco Cup final. He's pictured here in the WHA version of the Oiler uniform. 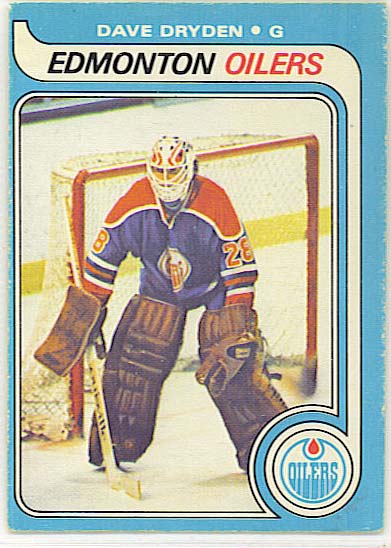 Dan Bouchard was an original Flame, picked from Boston in the 1972 Expansion draft. His play was one of the major reasons the Flames became respectable as fast as they did. I've always liked this card. Dan isn't doing much of anything in it, but I just found the Flames cards to particularly work with the blue borders. They just stand out. As kids in Calgary, the Atlanta cards were particularly prized for being both foreign and familiar.

Dan would be traded to Quebec early in '80-81 and from there to Winnipeg, so all three franchises he played for moved. I'm sure he had nothing to do with it. 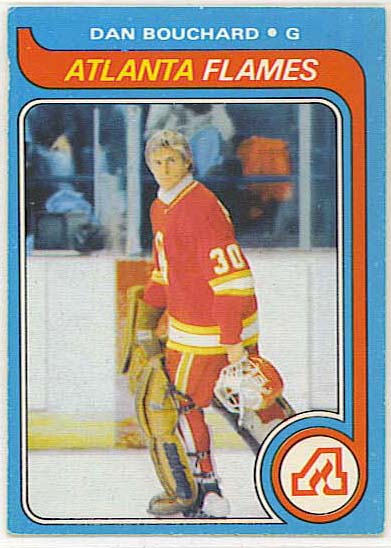 Hurting for time here, so I'm glad people can figure out who John Davidson is. Most forget he was a pretty solid goalie. Nice mask. 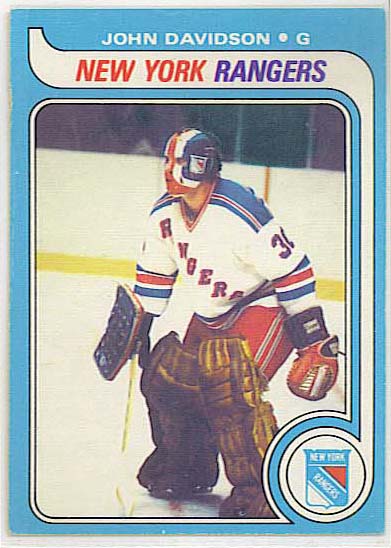 21. The last three players to see action in the Original Six era retired the same year. Who were they?

22. What WHA team ended with the grand total of one game won?

Grabovski's better than you think - 9 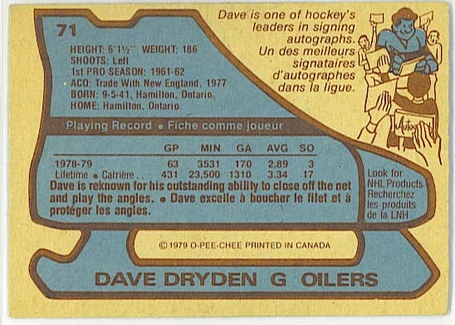