Leaf of the Day: Punch Imlach

The last team Maple Leafs team to win the Stanley Cup was led by a taskmaster coach that was well known for his defensive focus. Sound familiar?

Share All sharing options for: Leaf of the Day: Punch Imlach

We had to do a proper Leaf of the Day eventually. Trivia returns tomorrow. 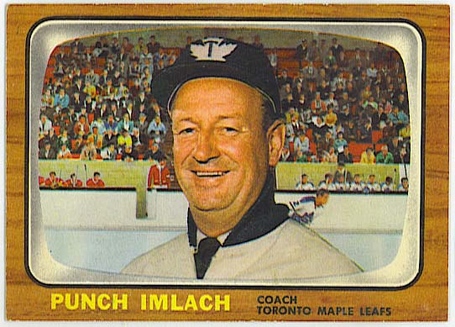 If you paid an absurd amount of attention to the old Leaf of the Day series and knew your cards far, far better than any human being should, you'd probably have noticed that there was one set that never saw the light of day. I have no idea how many years ago it was that I decided to sit on the 1966-67 set until the next Leaf playoff game, but I know I expected to start these long before now. There's no telling how many I will get through, but let's hope for a good long run.

I really wonder how the Leafs of 1966-67 would have looked to modern eyes and particularly to modern stats. They were reputed to be an excellent defense-first squad, but then again, Randy Carlyle is reputed to be a defense-first coach and I'm not exactly sold on that. Punch, though, had some pretty serious D to work with and that probably helped.

The 1966-67 Leaf season followed the basic pattern that so many Leaf seasons seem to do. They were sailing along through Christmas and into the middle of January when all of a sudden the wheels just fell off. On Saturday, January 14, they dumped Detroit 5-2, then over the next four weeks they didn't record a single point. That took ten straight losses. Punch wound up in the hospital with stress and King Clancy found himself behind the bench.

King turned out to be a breath of fresh air and the Leafs rescued their season with an 8-0-2 run. Punch then came back and they played win-two, lose-two for the balance of the schedule. It was enough for a third-place finish and a first-round meeting with Chicago, who finished first - 19 points ahead.

I find it a bit hard to get a read on Punch Imlach as a coach. By the late 1960s, for sure, he was a polarizing figure within the room if not necessarily outside of it. The room had its loyalists, guys like Bower and Horton who'd thrived under Punch, as well as his detractors, which included pretty much all of the young players and particularly Frank Mahovlich, the brilliant winger that Punch seemed determined to ride into the ground. Even vets like Allan Stanley seemed to have had their fill, playing despite him rather than for him.

Punch was a hard taskmaster and a preacher of defensive hockey and he'd really rip you if you didn't do as he asked (see Pappin, Jim). For years, this worked and the Leafs were the dominant team of the early 1960s. (Even Mahovlich said he liked playing under Punch the first few years.) By the later 1960s, it was getting stale.

Was this inevitable? Even Pat Burns, cut at least superficially from the same cloth, was talking to the wall by year five and had to move on. Punch was in year nine in 1966-67. Being the GM and thus having the power of life and death probably helped, but he clashed with a number of his younger, more offensively-oriented players and many found themselves out of the organization within short order.

(I won't get into Punch's return in the late 1970s as today is meant to be a happy occasion.)

Punch came to the Leafs out of senior hockey in June, 1958. He and King Clancy were named assistant GMs (though they were assistants to nobody - the team that lacked an actual GM). The two of them reported to the "Group of Seven," a board that took over the day-to-day operation of the team as Hap Day left and Conn Smythe took on a reduced role. By November, 1958, Punch was given the full title. He quickly disposed of head coach Billy Reay and installed himself behind the bench. Punch would show himself to be an excellent team-builder, mixing solid vets like Bert Olmstead and Allan Stanley into a very young squad, and squeaked the Leafs into the 1959 playoffs where they surprised the Bruins before losing to the Habs in the Final.

He would guide the Leafs through their last great run - four Cups in a six-year span, before falling victim to a disastrous 1969 playoff series against Boston (interesting that his reign basically started and ended with Boston). He had been trying to work in a series of kids into the blue line and the team was in no shape to match an ascendant Bruins squad with Bobby Orr in full flight.

I question whether it's truly fair to say that he couldn't handle the transition to the modern player (this was one of the criticisms leveled at him in hindsight). He had a ton of kids in Buffalo and worked well with them. Then again, he left Buffalo with a team in revolt, so perhaps there's something to it. I think that in the end he was simply one in a long line of somewhat caustic coaches who can match wits in a game and motivate players, but whose shtick gets old after a time and particularly when times are tough.

In 1966-67, he was about as firmly-entrenched as an executive can possibly be. There would be fractures this season, but everyone would survive intact.

His 1966-67 card is the last on which he'd appear (there would be no more coach cards until 1974-75). Interesting that the first thing Topps says about him is that he's a disciplinarian and how well it worked. As we see, he had one more win left in him, but the cracks were starting to show....

Also - the cap on his head (instead of the traditional fedora) is the cap from the AAA Toronto Maple Leafs baseball club, which was about to head into its last season in 1967 (and, of course, is the team after whom the hockey Leafs are named). 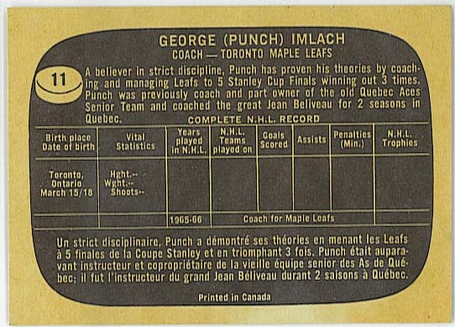