Leaf of the Day: Pete Stemkowski - The Polish Prince

46 years ago, the Leafs won it all. These are the people who did it, as seen through their cards. Pete Stemkowski didn't score the Cup-winner, but he's the one that made it happen.

Share All sharing options for: Leaf of the Day: Pete Stemkowski - The Polish Prince

Game 6 - late in the second period. The Leafs are leading 1-0 on a Ron Ellis goal. He lifted a Red Kelly rebound over Gump Worsley for only his second marker of the playoffs.

Play is a little ragged, neither team is generating a whole lot at the moment. After Brian Conacher makes an extra move at the Habs blue line and throws a rush offside, both teams make wholesale changes. The Habs bring out a line of Ralph Backstrom, John Ferguson and Claude Larose and a defense of Terry Harper and Jacques Laperriere. The Leafs counter with the line that has delivered most of their offense in these playoffs - Pete Stemkowski between Jim Pappin and Bob Pulford. Horton and Stanley are on the blue line.

Pete Stemkowski - known alteratively as either "Stemmer" or "the Polish Prince" - is just 23. A Winnipeg kid, he came up through the Marlies and had been getting larger and larger cups of coffee with the big club since 1963-64. This was his first full season and he'd responded with 13 goals and 22 assists. An excellent junior and a pretty good scorer in the AHL, he hadn't shown a lot of offense yet with the big club - at least until the playoffs got rolling. Now, he, Pappin and Pulford were the offensive spark, passing names like Keon and Mahovlich.

Shortly after the puck dropped, it wound up in the Montreal zone. As PA announcer Paul Morris made his customary "Last minute of play in this period" call, a Leaf shot went wide. Larose gathered the puck and carried it all the way into the Leaf zone before being bodied off it by Allan Stanley. Pulford then gathered it up near the right face-off circle, carried it towards the boards and spotted Pappin at the blue line near the centre of the ice. Pappin took the pass and hit Stemkowski in full flight on the left wing. Stemkowski got over the blue line, dropped the puck back for Pappin and then bulled his way to the front of the net.

What happened next was a little fortunate. The rush itself wasn't particularly dangerous. Laperriere and Harper switched as they should. Laperriere forced Pappin wide while Harper grappled with Stemkowski. Pappin wound up past the face-off circle with no place to go, so he lobbed the puck towards the net where Harper and Stemkowski battled for position. The puck hit Terry Harper in the skate and tricked past a startled Gump Worsley at the far post.

The goal was originally awarded to Stemkowski. Part way through the third, after reviewing who knows what (as the footage is lousy), the goal was changed to Pappin. It was a lucky break, a late goal off a deflection resulting from Stemkowski being large, difficult to handle and willing to go to the danger areas.

In the third, ex-Leaf Dick Duff would dance around Horton and beat Sawchuk along the ice. This was the only goal Terry would give up. The Pappin marker would stand as the Cup-winner.

Stemkowski wavers as to whether the puck hit Harper, as eventually declared, or him as originally thought. Either way, it was his drive to the goal that made it possible.

While I'd love to see the Leafs find another Mats, another Pete Stemkowski wouldn't hurt them either. A big body up the middle who would go to the net and cause trouble would help this team quite a bit.

Pete, who was second in Leaf scoring that spring with five goals and seven assists in 12 games, couldn't follow it up in 1967-68. As one of a large number of Leaf forwards suffering off years, he went to Detroit in the Frank Mahovlich trade. It was there that he changed from the 15-goal scorer he was in Toronto to the 25-goal scorer he'd be for the rest of his career. A 1971 trade to the Rangers gave him a much stronger group of players around him and he was a contributor to a very good Ranger squad for years. He scored a couple of OT winners for them in the '71 playoffs.

Pete spent a number of seasons as the colour guy for Sharks broadcasts. 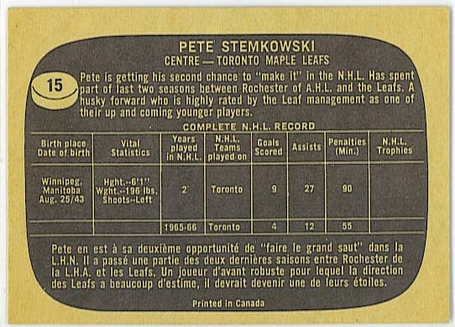