Leaf of the Day: The last team - the guy wearing snowshoes

46 years ago, the Leafs won it all. These are the people who did it, as seen through their cards. Allan Stanley only had two points in the 1967 playoffs, but both came in series-deciding games.

Share All sharing options for: Leaf of the Day: The last team - the guy wearing snowshoes

Clearly, I had no idea when I made the date that the Leafs were going to be where they were. It was a funny series. The Leafs had been shelled in the first two games in Detroit, gutted out a couple tight wins at home and then won an overtime game in Detroit to go up 3-2. Game 6 was a disaster. Detroit got untracked and tore them to shreds at home. I remember that Shawn Burr had scored just as I was parking the car to put Detroit up by a goal. That was the last play I heard.

Coming home that night, I'd actually forgotten all about the game. The radio was tuned to some music station or other and "Help!" by the Beatles was on. As it finished, the DJ said, "This goes out to all the Leaf fans out there..."

"WHAT?!?!?" Instantly i flipped over to the FAN just in time to hear what was likely the 30th replay of Bowen's call of the Borschevsky goal. Needless to say, I made sure for the rest of the spring that I was never otherwise occupied on hockey night.

You can make some parallels between this season and that one. A lot would be stretches. I tend to feel that this club has more of a '99 Quinn vibe than a '93 Burns one. What's true of both of those and seems to me to be true of this one, too, is that they were special because they were great rides unencumbered by any kind of fan expectation. The teams weren't expected to win anything and generally weren't even picked to make the playoffs much less win a round. The whole experience was a bonus and it made it doubly-enjoyable. In subsequent years, we'd come to expect a decent playoff round. It was still fun, but never quite the same as the time the team was playing entirely with house money.

(And just for the record - nope, don't regret going out that night at all.)

I don't have a decent segue into Allan Stanley, except that a lot of his success must have had the same kind of feel to it. Booed out of New York and abandoned by Boston as too old, Stanley came to Toronto, found a new lease on life at 32 and played a decade of his best hockey, making three Second-Team All-Star berths and four Stanley Cups. Could have been a lot worse.

Stanley came into the league in 1948 with a ton of fanfare. Originally a Bruin prospect, the Rangers traded three players and $70,000 cash to get him. This was a ton of money for a hockey player, particularly one that had never played an NHL game. He was sold to the fanbase as a franchise-altering kind of guy. When he got to the Rangers and was simply very good, the reaction was extremely hostile. Even though, by all accounts, there was nothing actually wrong with his play, he didn't save the Rangers and paid the price for it.

After six years of hearing it from Rangers fans, he was moved first to Chicago and then on to Boston, which was enjoying a mostly-forgotten run as the best NHL team not located in Montreal. He missed the 1957 playoffs with an injury, which the Boston GM felt was key to Boston's Cup Final loss that spring (even more important than guys named Maurice RIchard, Jean Beliveau et al, apparently). He was with them for another Final the following spring.

Heading into 1958, the Leafs were looking for defense and asked the Bruins about a blueliner named Bob Armstrong. The Bruins declined, but offered Stanley, now 32 and never exactly fleet-footed at the best of times (hence the nickname "Snowshoes"). Punch bit on this and for the cost of one Jim Morrison, Stanley was a Leaf.

Paired with Tim Horton, Stanley was a success for the next decade. The Leafs made a late dash for the playoffs that year and then surprised Boston in the first round. He made his first All-Star team in 1959-60 and led the Leafs to a second Final. Starting in 1962, the Leafs would win four of the next six Cups.

In the early going, Stanley offered a fair bit of offense. He hit for between 9-10 goals and 33-35 points each year between 1959-60 and 1961-62. As he aged, he tended to stay home a lot more and let Horton do the skating. My grandfather used to grouse that you'd never see Allan Stanley on the far side of centre. It still worked for him, though. He was still a Second-Team All-Star at age 39.

In the 1967 playoffs, Stanley was 41 and the second-oldest player on the team. He only picked up two assists, but both came on key goals in series-deciding wins. As the Leafs shocked Chicago in the first round, Stanley fed Red Kelly who then set up Pete Stemkowski for the insurance marker. In Game 6 against Montreal, he picked up an assist on the opening goal by Ron Ellis, feeding Kelly again for the shot that would produce the fat rebound Ellis jumped on. On the second goal by Pappin, it was his hit that knocked Larose off the puck and freed it for Pulford to send up ice. On the empty-netter, it was Stanley who took the draw against Jean Beliveau, winning the puck back to Kelly (again), who sprang Pulford, who then found Armstrong streaking down the right side. Armstrong's empty-netter would clinch the victory. (It seems that had there been third assists, Stanley would have done rather well. It kind of goes to his reputation as a player who would do a lot of things right that never showed on the scoreboard.)

Stanley never played another playoff game for the Leafs. They missed out in 1968 due to a prolonged January swoon and his last season was spent as a Flyer. He was key in that last Cup, though, even though it only shows up as a pair of assists.

As for tonight, I have no predicitons. I can forsee almost any outcome. That's what makes it fun. :) 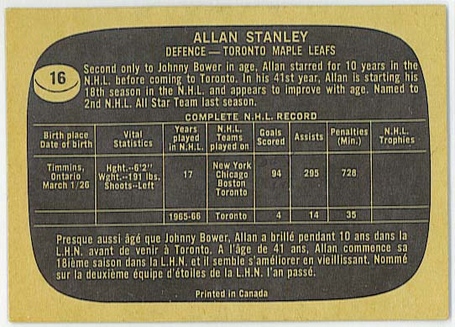