The Relationship Between Top 6 Ice Time and Shooting Percentage

Do teams that give their top 6 forwards more ice time see a higher team shooting percentage?

Share All sharing options for: The Relationship Between Top 6 Ice Time and Shooting Percentage

One topic that's come up fairly frequently in discussions about the Toronto Maple Leafs this year is PDO. PDO is the sum of even strength shooting percentage and even strength save percentage, and it shows a strong tendency to regress toward 1000 over the long term (like a full 82 game NHL season). The Leafs finished this 48 game season with an unusually high PDO of 1029. Toronto's even strength save percentage of .919 was right in the middle of the league, but their shooting percentage was a league leading 11%, nearly a full percent better than any other team in the league!

While the strong tendency of PDO to regress toward 1000 has been, I think, pretty conclusively demonstrated (see this piece for example), many people still argue against the concept for any number of reasons. One argument is that teams have "natural" PDOs that differ from 1000 based on the quality of the team and that we should adjust our expectations accordingly. Both Tom Awad and Tyler Dellow have shown that the on-ice shooting percentage of players is not evenly distributed throughout the league; top tier forwards, as indicated by ice time, have higher on-ice SH%s than forwards lower down in the depth chart. This lead me to wonder, could a team consistently produce a higher on-ice SH% by giving a bigger share of ice time to its top forwards? After all, if top line forwards have consistently higher on-ice SH%s it should logically follow that giving them a bigger share of ice time will tilt the percentages in their direction, right?

To try to answer this question I collected a few pieces of information for every team in the NHL from the last 82 game season, 2011-12. The first thing I gathered was the average per game even strength time on ice for the top six forwards on each team (as determined by ES TOI) which I took from NHL.com; I placed a minimum games played cut-off of 20 for a player to be included. I then grabbed the even strength time on ice per game for each team from Behind The Net. I also collected each team's even strength shooting percentage from Behind the Net. Once I had that information I calculated what percent of ice time was played by each team's top 6 forwards and also by each team's top 3 forwards.

[NOTE: I made a mistake in my calculations in the original version of these two charts, which significantly under-reported the percent of TOI eaten up by top 6 and top 3 forwards. The correlations reported in the subsequent paragraphs were correct, but the charts have been updated to reflect the correct ranges.]

So is there a relationship between a team's SH% and how big a share of their ice time their top tier forwards get? Here's the teams ranked by share of ES TOI eaten up by their top 6 forwards:

And this time sorted by share of ES TOI played by the top line:

I can't see any clear trend in either of those tables. What about if we look at a scatter plot of the numbers, does something emerge then? Here's the top 6: 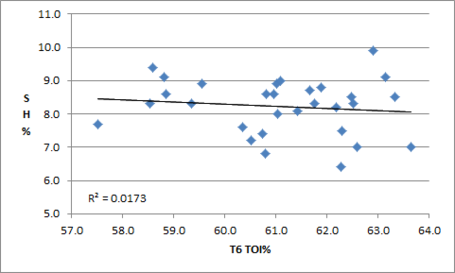 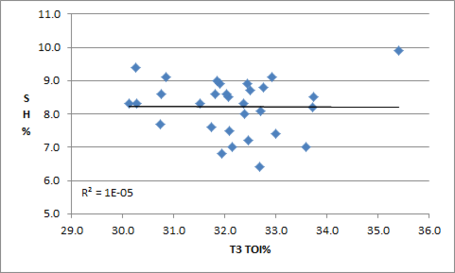 [NOTE: I've never taken a statistics course and this is my first stab at correlations, so if I royally screw up this next bit someone should show up in the comments and tell me how dumb I am. If I don't screw it up you can tell me how dumb I am anyway, if that's your thing.]

Let's boil all that info down to a smaller batch of numbers. The correlation coefficient for the top 6 ice time to shooting percentage is -0.13. For top 3 TOI to SH% it's -0.0038. Those are (I think) pretty weak correlations, and they actually run in the opposite direction of what I theorised at the beginning of this exercise: team SH% seems to fall slightly as top players earn more ice time. Looking at the scatter plots though, it definitely looks to me like the results are more or less random.

There could be a number of explanations for that trend: maybe fatigue is lowering the effectiveness of players who get a lot of ice time, for example. But I think what we have here is another piece of evidence that SH% at the team level is largely random over an 82 game season. That's not a very exciting conclusion, and it runs contrary to what my intuition suggested based on Tom and Tyler's articles linked above, but as far as I can tell it's what the data says. Based on the data I've gathered here it doesn't look like a team can boost its SH% by loading up its top forwards with more ice time.