Leaf of the Day: The Last Team - The Goalie

46 years ago, the Leafs won it all. These are the people who did it, as seen through their cards.

Share All sharing options for: Leaf of the Day: The Last Team - The Goalie 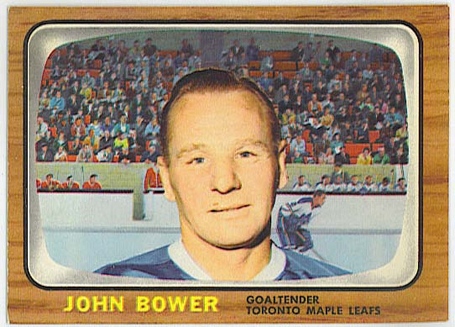 I don't think you should ever have to apologize for good goaltending. We've seen enough of the opposite to know what it does and it isn't pretty. Yes, a good goalie can hide a multitude of sins elsewhere in your team, but that's his job. In an ideal world, the rest of the team is good enough to only need to be bailed out a handful of times. In ours, they need to be bailed out a tad much - but again, it sure beats the opposite.

The 1966-67 Leafs intended to go with the Bower/Sawchuk tandem they'd used since 1964-65. They actually ended up using five different goalies as both Bower and Sawchuk missed significant time with injuries. Bower broke his hand and missed several weeks and Sawchuk had a series of problems with his back. Unfortunately, these injuries largely overlapped and third goalie Bruce Gamble ended up playing almost as much as either of the two starters. Gary Smith and Al Smith contributed three games between them.

I was looking at the ten-game losing streak and began to wonder who was in net for it and whether any of it could be attributed to the injuries in net. As it turned out, most of the losses were racked up by Gamble. Bower returned at the end and clearly showed the effects of the time off. Still, within a handful of games of his return, the Leafs took off. The turnaround that was attributed to Clancy might have been every bit as attributable to the return to form of Johnny Bower.

Another interesting little thing that turned up in the losing streak was something we all know too well. The Leafs were outshot in every single one of them, often quite significantly. It makes one wonder again just how strong the defensive play was versus the contribution of the goaltending. I didn't check out the full season. I will do so and report back.

Johnny didn't play too much in the playoffs. He got into leg and groin problems and the bulk of the work went to Terry Sawchuk. When he did play, he was brilliant. In parts of four games, he was 2-0 with a 1.64 GAA and a shutout of Montreal in the Final. In the Stanley Cup-deciding Game 6, he was on the bench as a courtesy. He couldn't have played if needed. Rookie Al Smith was in the stands and would have had to dress and go in if Sawchuk were injured.

Johnny is also a prince of a human being. My kids met him at our local Tim's and he was incredibly gracious - plus had a smile to light up a room. It's truly a pleasure to meet him.

Oh - and just for the record - Johnny's save percentage in those four playoff games? A tidy .957 (111 saves on 116 shots). I'll try to calculate his season save percentage later. 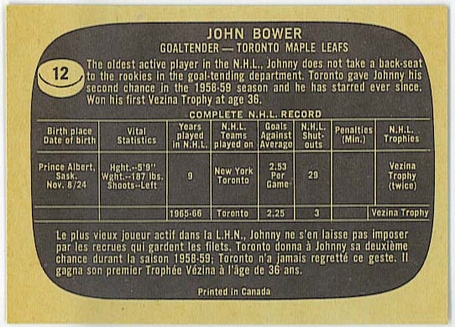