Leaf of the Day: Terry Sawchuk - the other goalie

46 years ago, the Leafs won it all. These are the people who did it, as seen through their cards.

Share All sharing options for: Leaf of the Day: Terry Sawchuk - the other goalie

There are a lot of stories about the 1967 team that don't get a lot of play. We hear that they were very old, but not that seven of the top eight scorers were under 30 (Tim Horton was the exception). We hear the great team defense led by Horton and Stanley, but not that Marcel Pronovost and Larry Hillman were on the ice for just a single even-strength goal against in 12 games. We hear about the old goalies, but it's never really clear just how much this championship was dependent on Terry Sawchuk's wonky back.

Sawchuk missed a lot of the regular season to that back. He sat out the entire 10-game losing streak (which likely contributed to its length) and only ended up seeing action in 28 games. This actually led the goalies, which tells you a lot about why it was a trying regular season.

He was fit for the playoffs, though, and was the key reason the Leafs got past Chicago in the first round. After the opener, which the Leafs lost 5-2, Sawchuk was outstanding. He went 4-1, 1.50, .958 over the balance of the series. At one point, Bobby Hull drilled him in the shoulder with a slapper, knocking him to the ice like he'd been shot. Hull skated up to him and warned him to stay down, there would be more coming. It didn't matter. Terry was tougher than that.

Against Montreal, Sawchuk had a second bad opener. Bower, who was healthy again, came in for Games Two and Three and was brilliant. He blew apart his groin before Game Four, though, and Terry, who hadn't expected to play and had had a few extra beverages the night before, got ripped 6-2 to tie the series. In the last two games, though, he was on and the Habs only beat him twice on 79 shots. That was the last we saw of Terry as a Leaf. I can only presume that Bower's age seemed less problematic than Terry 's back and it was Terry left unprotected in the expansion draft. He'd play well in limited action over the next three years, but the 1967 playoffs was his last season of real mastery. 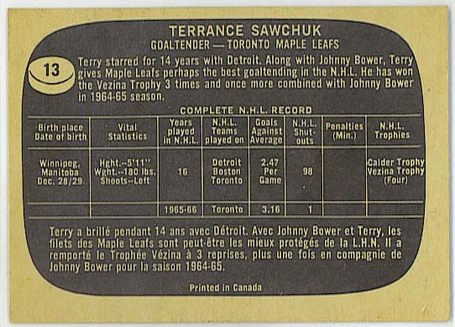