Leaf of the Day: The last team - the speedster

46 years ago, the Leafs won it all. These are the people who did it, as seen through their cards. Mike Walton was part of the forgotten young core of the 1966-67 Leafs.

Share All sharing options for: Leaf of the Day: The last team - the speedster

The 1967 Leafs are legendary for - among other things - being very, very old. When Game 6 was ending, the average age of the six players on the ice was 37 - and it was only that low because 31-year-old Bob Pulford was dragging the number down.

The reality was a little different. The Leafs were old, yes, but the age was primarily concentrated in two places - in net and on the blue line. The thing that Leafs fans had to look forward to after the end of the '66-67 season was a pretty impressive lot of young forwards, many of whom had figured prominently in the Cup win.

One of the youngest players in the playoff run was Mike Walton. Just 22 and five days older than Ron Ellis, Mike split the season between Rochester of the AHL (19-33-52 in just 36 games) and Toronto (7-10-17 over 31 games in his first sustained NHL action). Used primarily on the power play, he scored four goals and three assists in 12 games, placing him seventh in team scoring.

The common story on Mike Walton is that he was a tremendous talent who never really lived up to it. It's sort of accurate, but kind of unfair at the same time. In a lot of ways, Mike Walton did reach the heights set for him. At his absolute best, he led the WHA in scoring and was a point-per-game player in the NHL. He was just dragged down by injuries and circumstances and a lot of his best seasons were shortened and/or played out of the spotlight.

To best describe Mike Walton the player, I'd take Phil Kessel's skill set, Frank Mahovlich's nerves and Joffrey Lupul's injury history. Mike had tremendous skating ability, quick hands and a scorer's touch. From the beginning, great things were expected of him. Like Mahovlich (and really, like most of the young players on the Leafs), he was best suited to a free-wheeling style rather than the tight checking the Leafs preferred. He was in and out of Punch Imlach's doghouse. They clashed over his checking (or lack thereof). They clashed over his hair, of which there was too much (though not in 1966). Walton was also Leaf royalty, having married a granddaughter of Conn Smythe. This didn't help.

Still, he was the bright spot of 1967-68. Many players suffered through awful seasons that year, but Mike was not one of them, pacing the Leafs with 30 goals and 59 points. He slipped back a bit in 1968-69 ( which was likely the high-water mark for his fights with Imlach). Punch was let go after the '69 playoffs and Walton responded with a very good, albeit short, '69-70 season (21-34-55 in just 58 games). That was the last good time in Toronto, though.

Mike's 1970-71 season was poor. His nerves weren't good, he was hearing it from management and the press, and after consulting with a league psychiatrist, he was diagnosed with depression. This was exacerbated by his familial relationship with the team. It was recommended that he be moved for the good of everyone involved. He would be sent to Philadelphia along with Bruce Gamble for Bernie Parent, then flipped to Boston the same day.

Boston would be a good fit for Mike - they were a far more offensive-oriented unit and he'd be looked at as a secondary scorer behind the Espo-Hodge-Cashman line. His regular season that year wasn't much, but he had a good bounce-back season in 1971-72, including 28 goals, a strong playoff run and a second Cup win.

The 1972-73 season looked to be the breakout season. Thirty-seven games in, Mike had 21 goals and 16 assists. While I've seen it written that he had only played 33 games to that point (which would make the numbers a little better), I can't verify this. Either way, he was at minimum scoring a point per game and was on pace for both a career high in goals (~45) and points (78+). He'd scored seven goals in the past eight games and was 20-14-34 over the past 29. His line was clicking, the Bruins were red hot and he was scoring in bunches.

Game 38 was in St. Louis, just after New Year's, 1973. Waiting at the hotel for their bags to come, someone started horsing around and throwing water and Mike, trying to avoid it, somehow crashed through a plate-glass door. He took over 200 stitches, lost a ton of blood and missed a month. After a couple of games to find his bearings, he went on a nice little run - scoring six points in five games including a first-period hat trick against Pittsburgh.

Then something happened. He missed about 9 more games (it isn't clear whether this was to a second injury, complications from the first for or some other reason - they weren't consecutive) and his scoring tailed right off. After mid-February, he didn't score another goal. After such a great start, he finished the season 19-4-6-10 (including that Pittsburgh hat trick) and had a poor playoff (5-1-1-2). The breakout season was wrecked. The Bruins were dumped in the first round and rumours were that he was on the way out.

That spring, an offer came from the WHA and Walton jumped on it. He was 29 years old and saw a payday coming that Boston wouldn't ever match. Thus he became a Minnesota Fighting Saint - and it was here he played his best hockey. He returned to the pre-injury Boston form and led the WHA in goals (57) and points (117) in 1973-74, besting even Bobby Hull. In two and a half seasons with Minnesota (211 games), he'd score 136 goals and 281 points.

Circumstance knocked him out of the 1975-76 scoring race (not that anyone was catching Marc Tardif that year, anyway). After just 59 games (of which he'd played 58 and had 71 points), the FIghting Saints up and folded. The roster (including Dave Keon, a very young Jack Carlson of Slap Shot fame and an equally-young Bruce Boudreau) was dispersed throughout the league. Walton, whose NHL rights had been traded to Vancouver, chose to join the Canucks, scoring eight goals and eight assists in 10 games to finish the season.

Bobby Orr and Mike Walton ran hockey camps in Ontario for years. They were great friends. He went into real estate and was the agent for one of Mats Sundin's house flips.

Between the NHL and WHA, Mike Walton dressed for 799 games, scored 337 goals and 729 points. He won a couple of Stanley Cups and a WHA scoring title. They aren't superstar numbers, but they're pretty good when you look at the number of seasons that were interrupted. Between 1965, when he got his first call-up, and his NHL retirement in 1979, he only played 60 games eight times and 70 just four. That makes it tougher. 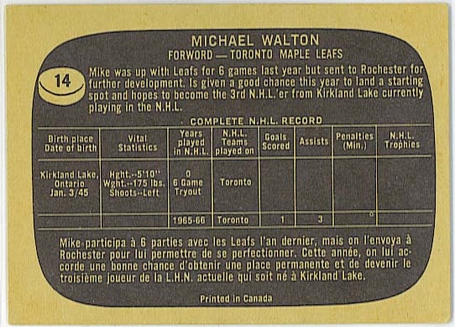