Day fifteen of the PPP Trivia Contest! We made it! This is the last day, but there's still no reason not to join us. Why? To win stuff, of course!

Fifteen posts, 30 questions, of which these are the last one and two, respectively. We may have a winner already set, though if Sknut can get in there and score two, that'll force a tiebreaker. (I'll randomize other people with tied scores, but not for the win. If the top two are tied, we'll need a tiebreaker.)

When we're done, I'll make a post that shows all the potential prizes and we'll have a draft. There are only six people who have garnered points, but I have to reconfirm with TAS and Sarah Connors that there haven't been any silent donors. Whether they get anything right or not, they earned their prizes (and I'll let people sign up at the draft if they want to take part, though they go after our participants). This will likely appear next week as I get my ducks in order.

The draft order will go simply from 1-6+, then repeat. I'm thinking at the moment that people will each take five picks. It'll depend on whether the draft is moving smoothly (if someone doesn't show it'll really drag out) and whether I can come up with a good idea for what to do with the extra stuff.

When I first came to PPP many, many moons ago, I did a number of trivia posts. Trivia in the age of google is tricky. Trivia in the age of hockey-reference.com's query tool is nigh-on impossible. I don't think a single question survived the first hour. That's how much hockey information has appeared just in the last little while. It's great for researching, lousy for trivia.

Note that if we do need a tie-breaker question, it will be completely un-googleable. It is not on the net. It is not on youtube (which is the net, sure, but bear with me). The only way to know it immediately will be to have been sitting next to me in 1984 and noticing it. And nobody was. So there.

Now, I admit that I hoped at the outset for a larger turnout, but I'm happy with the people that did and I think we've had some fun. Again, our two runners still need sponsors and if you want to help them and get a little parcel in the mail at the same time, donate $2.50 to each of the following

and then drop me an email with your address (1967ers at gmail dot com) so I can mail things out correctly when all is said and done.

Given that it's the last day, we'll put a couple people I'd been avoiding for petty playoff-ish reasons. These are the oldest remaining card in the pile and the biggest name outstanding from the Habs.

One benefit of doing this is that I don't have to explain to anyone who Guy Lafleur was. This saves time and lets the post get up that much faster. This card is from the 1973-74 OPC set, notorious for dodgy cardboard and finicky borders. 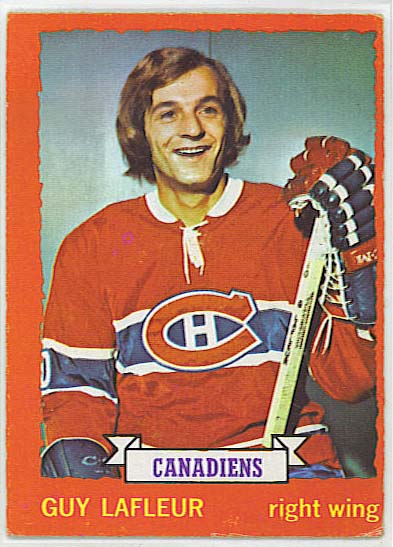 Guy was entering his third season here and at this point in his career, the jury was still out on him. Marcel Dionne was looking like the better pick and he was in Detroit. Guy was scoring, but not at anything like the pace expected. He would have another year to wait before exploding into the player everyone saw in junior. 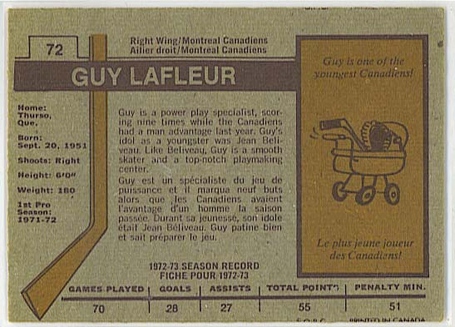 Imagine Guy Lafleur being described as a PP specialist....

Each card that year was released in a light and dark back variation. This is the dark back. They're generally considered tougher to find in good shape.

Don McKenney, certainly in comparison to Lafleur, is a name that most won't know primarily because he didn't play his best years for Montreal, Toronto or Detroit - at least not for the majority of his career. He was an excellent player, though - a smooth centre who was a virtual lock for 20-plus goals and was top-ten in scoring each year between 1956-57 and 1959-60. He led the NHL in assists in 1959-60 and won the Byng for his efforts. 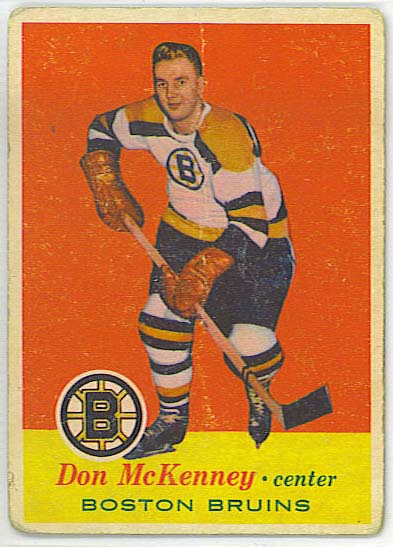 In 1963-64, he was the other player traded to the Leafs with Andy Bathgate. Mostly forgotten, he was excellent, delivering a point-per-game in both the regular season (15-9-6-15) and playoffs (12-4-8-12). Unfortunately, he blew his shoulder apart in Game 5 of the Final and really was never right again. He only scored 16 more NHL goals, though did put together some decent minor league seasons through 1969-70. 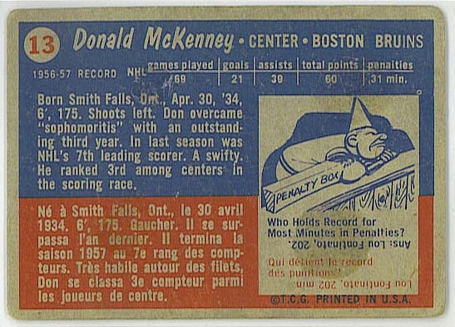 The 1957-58 Topps set was the first they ever made that was to the modern standard size. It was printed in the US and distributed in Canada through OPC.

29. Who was the first European-trained player to have a 100-point NHL season?

30. What was special about Wilf Paiement's second goal of the 1980-81 season? (Hint: it's not that it was an empty-netter and there is only one acceptable answer.)

Grabovski's better than you think - 13