Leafs Lose to Bruins In Overtime, 4-3, Fall to 3-1 in Playoff Series

The Toronto Maple Leafs played another strong game against the Boston Bruins, but couldn't get the overtime winner. they fall behind in the series, 3-1, and will need a win on Friday to stay alive.

Share All sharing options for: Leafs Lose to Bruins In Overtime, 4-3, Fall to 3-1 in Playoff Series

Since most of you saw the game, and the rest of you have already read over the score sheet obsessively, the Story is this: The Leafs played some of their best hockey in the last ten years last night. They out shot the Bruins, they led for the first 32 minutes of the game, and they got to overtime. If a Bruins' fan says they weren't sweating bullets over last night's game, they're lying.

The Game in Six

Jake Gardiner had a great, great game last night. For a while, Hughson couldn't stop talking about how much he had the puck - he and Franson, who weren't paired together but mostly handled the Bruins' bottom six, had 10 and 14 more shot attempts against the Bruins net than against the Leafs' while they were on ice.

Mikhail Grabovski also had a strong shot differential, but rather than playing against the bottom six, he was matched against Seguin-Bergeron-Marchand. Strong performance from a strong player, and hopefully Carlyle will realize he was wrong to bury Grabbo, rather than putting another dollar in the "bench a talented player for 20+ games and he'll be motivated for the playoffs" jar. Because that's not a thing.

Ryan O'Byrne is awful, and I'm unhappy with Dave Nonis for acquiring him at the deadline. I can't see a way he's better than Komisarek or even Holzer as a third pairing option, because watching him handle the puck in the defensive zone is a thing of nightmares - he got hemmed in by the Bruins' fourth line, and it's terrible that Jake Gardiner should be stuck with a boat anchor. But more on ROB later.

Randy Carlyle continues to make terrible decisions with deployment and the lineup. Clarke MacArthur scored a goal, and still couldn't break nine minutes of ice time, and had an on-ice shot differential of +7 in that time. Colton Orr played almost seven and a half minutes. Tyler Bozak played almost 26 minutes, and continues to be matched way above his skill level, against the Bruins' top pairing and the Horton-Krejci-Lucic line. If Carlyle ever accidentally plays this team's optimal lineup - no face punchers, skill guys being rewarded for their minutes, and actual accountability in the lineup - the Leafs might actually be a decent hockey team. They got close, and flirted with outplaying the Boston Bruins.

Phaneuf and the Overtime Goal

Gets his own section today. Dion saw most of his night against the Krejci line and the Bruins' top pairing, and he struggled, both in terms of performance and in that he looked fairly labored through a lot of the game. It was probably his worst outing of the season, and I'll be interested to see if he's injured (there was some speculation last night), but that's not why he gets his own section.

Dion Phaneuf caught flack for the overtime goal. Why? Critics say it was because he got pinched, but since I didn't see a wave of complaints every time the Leafs' strong-side D man pinched throughout the game, we know it's really because he's an attractive fall guy for the goal. But rather than second-guessing the decision to pinch, was he really at fault fault for the goal against? Let's take a quick look: 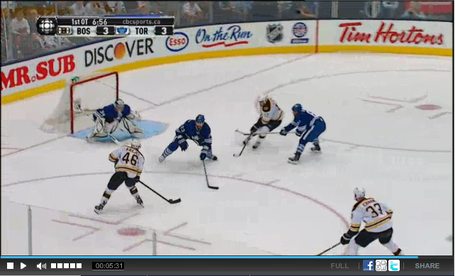 If anyone can tell me what the fuck Ryan O'Byrne is doing here besides the obvious ("losing the game"), I will give you a candy bar. You see, Phil "One Dimensional" Kessel, who has the footspeed of a lightning bolt, has caught up to and tied up his man, in a clip that should be used when some child asks "what's backchecking?" Ryan O'Byrne, being terrible at ice hockey, has not identified this, and continues to play it like a two-on-one. He gives up time and space to Krecji, and plays the pass, which in this case is synonymous with "covering an already covered man for no reason."

Reimer, as you can tell, is off his mark a little - also cheating towards the pass - and the two errors combine to end the game. I doubt Gunnarsson screws that play up - I was going to rail about Carlyle for having ROB on the ice instead of Gunnar, but he had just come off the ice while Kessel had the puck in the zone, and with Fraser injured, and Liles inexplicably in the box for the Leafs' worst active defenseman to play, there weren't a ton of options. So when people take to twitter with "trade Phaneuf," or "Phaneuf, nothing more," it seems to mostly be about noticing the big hit, then noticing the goal against - and name recognition probably doesn't help.

The Leafs will try to stave off elimination on Friday night, this time in Boston, where Rask will continue his early bid for Conn Smythe. Go Leafs Go.