Greetings, Pension Plan Puppeteers I come to you from the land of Bluebird Banterers. I don't know much about hockey but I do know some things about sports fandom and I figure that I'd share this Public Service Announcement with you.

A couple of weeks ago, Matthew Kory of Sports on Earth wrote "The Official Guide to Jersey Buying" and one of the suggestions (should be a directive, really) is to not ever buy a personalized jersey with one's own name on the back. But, of course, most of us know this already. Purchasing an official Maple Leafs jersey with your own name on the back not only looks stupid and narcissistic, but it is stupid and narcissistic. Especially if you pick the number 69 to go with it.

(The only kind of jerseys that are worst are probably crappy cheap counterfeits and ones that have dumb things on the back.)

Nardeo was alleged to have approached several women in the TTC, brushed up against them, and committed "an indecent act," according to a Toronto Police Service release this afternoon. The man was arrested and was promptly identified because of what he was wearing: 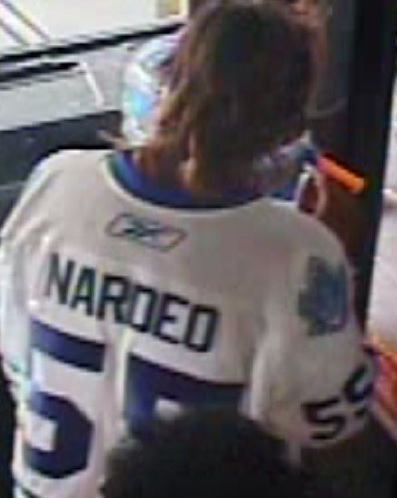 A "brown" (Toronto Police term) man with a mullet wearing white shorts and a Maple Leafs jersey with his own name on the back charged with committing indecident acts. That's a side of multiculturalism they don't put in textbooks.