If you don't like the look of the Leafs' Corsi and Fenwick numbers from last season, the Leafs' actual time on attack is unlikely to impress you.

Share All sharing options for: Leafs' Attack Time At The Halfway Mark

Tracking time on attack (TOA) isn't really an advanced stat. Really, it's just me, watching the games with two stopwatches in hand, following a few basic rules and keeping track of whether the Leafs spend more time in their own end than in that of their opponents'. One of the main reasons I like this project so much is that I have some hope (albeit a slim one) that this type of thing could help bridge the gap between more traditional hockey analysis and the advanced stat crowd. Some folks are going to be hard-headed no matter what you put in front of them, but I think my findings are simple yet illuminating; stats like Corsi and Fenwick are very effective proxies for puck possession.

There are a few perspectives that need to be addressed before we get to the numbers: that of the Leafs' coaching staff, that of the hardcore advanced stat crowd, and my own, which has shifted somewhat over the course of this study. Of course, if you just want to get to the numbers, just skip down a little.

The Leafs' Public Position On This Stuff

By now, most of the readers here at PPP are familiar with the excellent MLHS interview with Greg Cronin in which he stated that the Leafs were out-shot because they were coached to wait for only the most opportune shooting chances:

We want to encourage our guys to have quality puck time in the offensive zone. If there’s a chance to take the puck to the net with a quality shot, then take the shot. But if we are going to throw it to the net and risk losing possession, we discourage that. Some people might find that strange. We would rather be able to change up our entire lineup of forwards in a 40 second shift, one after the other one after the other, and maintain possession in the other team’s zone and play against tired legs.

Most people who follow hockey closely know, by sheer common sense alone, that a 40-second possession time in the attacking zone is very rare and that the 2012-13 Leafs weren't exactly hemming other teams in on a regular basis. This attack time study shows that the Leafs spent much more time (at least in the first half of the season) hemmed in their own end with their opponents getting more "quality puck time" than vice versa.

It is true what Cronin says. One good chance can be more worthwhile than three poor ones. But more on that later.

Obviously even the most ardent supporters of advanced stats are going to be reticent to lump themselves into a so-titled category (though you might put me in there), but as with any other type of statistics, hockey stats are anything but conclusive. Numbers can reflect so many different angles that it can be difficult to separate the wheat from the chaff. But I think that most of us here at PPP have seen the pie sliced enough ways to agree that the Leafs didn't have the puck nearly as much as they should have throughout the 2012-13 season. If you can't agree on that, you are definitely someone who falls into the 'anti-stats' crowd.

Questions about the sustainability of the Leafs' shooting percentages and their goaltenders' collective save percentage aren't misplaced, though I think that, very broadly, those score-tied Fenwick and Corsi numbers so often bandied about on this site probably speak to a certain level of truth. The Leafs are going to need to hang on to the puck for a lot longer next season if they hope to make the playoffs. It's true, there is almost no way of knowing, with the huge staff turnover on the Leafs' roster and the general unpredictability inherent in the game of hockey, how much the team is going to improve/decline in the coming season, but if you believe that having the puck is good, you'll probably agree that the Leafs' chances don't look much better than they did last season, if at all.

A Few Other Thoughts

It's theoretically possible that the Leafs are able to reliably capitalize on fewer chances, and that all this attack time is moot, but I doubt it. PPP's own Steve Burtch has done some great work looking at shot distances under both Ron Wilson and Randy Carlyle, and found that Carlyle has not lessened shot distance. Obviously, this is good stuff, but I would submit that there is a lot more to shot quality than distance from the net, and that these numbers can be misleading. Anecdotally, having watched every game at least twice, my sense of the Leafs last year is that they did in fact mitigate shot quality. The real question to me is whether or not this is a sustainable strategy - my sense is 'not really'.

A shot taken 50 feet from the net is statistically unlikely to score, compared to one taken, say, 7 feet from the net, but if you make 2 or 3 shot attempts from the point, there is always a chance that someone tips the shot, someone grabs a rebound, or that a Joe Bowenian ric-oh-chet manages to find its way onto the right/wrong stick. Moreover, whether a shot is a one-timer, on the rush, a set play, etc. has a big impact on its chances of going in. In short, we may never come to a consensus on what constitutes shot quality, but I still think that puck possession is critical to winning hockey games.

First, a BIG thank you to Eric T. of Broad Street Hockey who is an Excel genius and who helped me sort the data I had quickly and efficiently. If you're not following him on Twitter (@BSH_EricT), I don't know why not. A second thank you is owed to David Johnson (@hockeyanalysis) for the Corsi + Fenwick info.

And now we get to the meat of this post: the Leafs were every bit as bad by my own measure as they were in Fenwick and Corsi events. In fact, I'm more inclined to give weight to this attack time stat than other "proxy" possession stats, because this is just a team's straightforward possession time. This is the percentage amount of time the Leafs actually had the puck and weren't running around in their own end. The Leafs looked awful in terms of proxy numbers, but look even slightly worse by my own. What's more, these numbers align well with the ones I came up with for the Bruins-Leafs playoff series (linked above). I guess I'm not expecting them to improve drastically over the remaining half of the '12-'13 season.

Below is a table showing the Leafs' time on attack percentage, broken down by score (behind or in front) and by period: 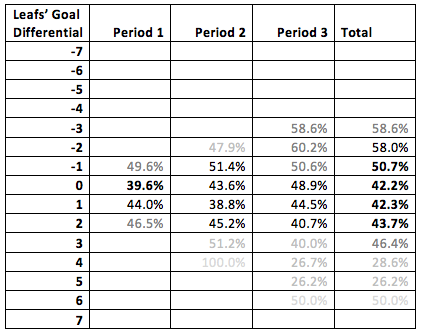 How Well Does This Correlate To Fenwick/Corsi?

'But wait', you say. 'Maybe those numbers just happen to match up at the end!' Nope. 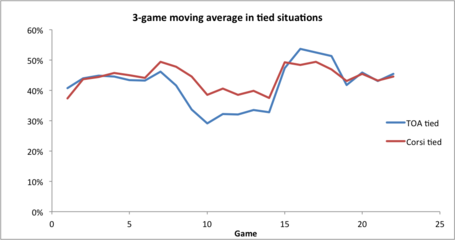 You don't even want to see the Fenwick one.

5v5 score tied is the best indicator we have, and it isn't pretty. The Leafs simply can't get a hold of the puck as often as they'd like to. Heck, a 42.2% possession time is even worse than their Fenwick numbers, which are already dead last in the league. OK, I suppose if I measured every other teams' time on attack, there's a chance the Leafs wouldn't be last, but really? Screw that. The Leafs were terrible in this regard, and need to improve. Period.

In terms of score effects, the Leafs pushed a bit harder to make up for a deficit, but 50.7% isn't an overwhelmingly strong showing, and while leading, their 46.4% is better, but could still use some work. If you think the sample size is too small, and that we should be considering all game states, the Leafs' overall attack time percentage (that is, Leafs' attack time / total amount of attack time) is still only 44.8%. Still terrible.

Probably the main thing to take away from this study is that the the Leafs' time on attack VERY closely mirrors their Corsi/Fenwick numbers from last season, and they're all awful. The Leafs weren't just out-shot and out-chanced, they weren't even capable of getting the puck into the offensive zone.

Although I have enjoyed this project (and the live tweeting of the games), it looks as though Fenwick and Corsi numbers mirror TOA so closely that it's no longer really worth tracking. I think it's safe to say at this point that Carlyle & Co. haven't found some new, ingenious high-quality-shots-only system because, if such a system really existed, wouldn't the Leafs just use it to get high quality shots all the time? In other words, waiting for high quality chances doesn't mean "getting hemmed in your defensive zone". The Leafs' success last year was akin to dropping into the fetal position in a fight, and then when the bully walks away, kicking him in the balls with his back turned. I doubt it works a second time, but we'll just have to wait and see.