The Leafs have traded John-Michael Liles for Tim Gleason

Share All sharing options for: Liles Traded for Tim Gleason

The Leafs have traded John-Michael Liles and Dennis Robertson for Tim Gleason, per Bob McKenzie:

TOR prospect going to CAR with J-M Liles for Gleason is defenceman Dennis Robertson, 6th round pick in 2011 draft.

Neither team, TOR or CAR, is taking back any salary in this trade. Full value of contracts move with both Gleason and Liles.

The best thing to say about this deal is that Dennis Robertson (#25 in our Top 25 Under 25) isn't a critical prospect for the Maple Leafs. Gleason makes $4M against the cap until 2016 compared to Liles' $3.875 over the same time frame.

Carolina Hurricanes' fan @ShutdownLine is worth a follow if you're looking for someone to keep you updated on Hurricanes stuff. Here's his take:

Gleason was one of my favorite Canes but if anyone thinks he is worth $4 mil. after the last two years then I don't know what to tell you.

@mirtle He played through a couple of injuries last year but he looks broken this season. Drowning in 3rd pairing assignments.

The Leafs had a third pairing logjam of Liles, Paul Ranger and Mark Fraser and by all accounts they haven't changed that with this trade.

This is basically a garbage swap where you give away a problem contract for another bad contract and hope the guy you get improves with a change of scenery. Unfortunately Tim Gleason has battled injuries for a number of years and as a guy on the wrong side of 30 it might end up that he's cooked. 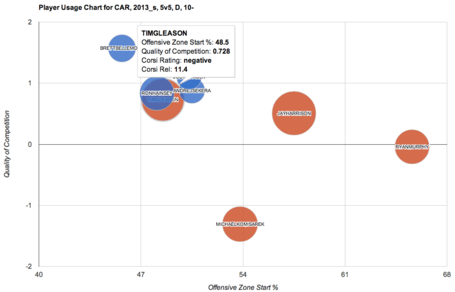 The Liles contract was ugly the day he signed it and I'd hardly call Dennis Robertson a prospect. Maybe Gleason finds his game on the third pairing here or if injuries catch up with him maybe he retires (or just gives us LTIR relief).

In terms of a personnel swap this doesn't seem atrocious, but we'll have to see what Randy Carlyle does with Gleason. If Gleason isn't appropriately protected in the lineup this could be ugly.