Ovechkin scored, in part because there's no one on that side to challenge him as he walks in off a line change (can't tell if Franson, coming on-ice after a line change, stopped skating before or after the shot got away). JVR tipped a puck in off a Phil Kessel shot, because those guys drive results - they're great. Carter Ashton felt compelled to fight, despite earning a fourth line spot on his AHL scoring performance, then Colton Orr decided to demonstrate his toughness by losing a fight. The Leafs were so inspired by Colton Orr's flailing and falling routine that Phil Kessel shot a ripping wrister past Neuvirth to take the lead! The Caps luck into an answering goal, as a bad bounce off McClement's leg went behind Bernier and in to the net. Then they'd find the game winner, and luck would have nothing to do with it. Here's your game in six:

The Leafs kept it close, I guess - they even lead for three and a half minutes! The first and third lines did a good job of dominating the chances for, but scoring prowess past the first line wasn't there this game. It sucks not to be able to get a win against a career .910 goalie, and it stings that the Leafs weren't able to capitalize on a game against a struggling Caps team. The Leafs have averaged just 2.25 GF over the last thirty two games - which would be fourth worst in the season's totals - and it is killing them in close games like this. 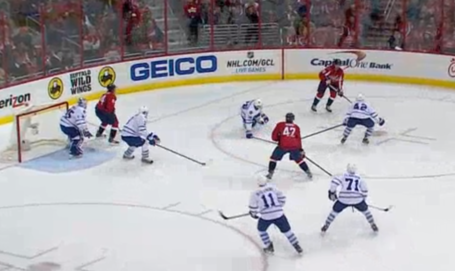 It's kind of impressive that the Leafs can have five guys covering no one. The man down low is available with an off-the-boards pass, Joel Ward is open (we know because he scores a game winning goal in the next frame), and if Johanssen wants to go high, he can easily get to a point man. All of his options are open, but man do the Leafs seem really sure of their decisions. My favorite part about this picture, by the way, is the 37 million dollar man coasting - with his legs on the train tracks - and failing to tie up the stick, the body, or really do anything useful.

The Leafs didn't dominate play and lose on an irregular number of crazy bounces (although the McClement goal was a fluke) - they hung in there, despite still trailing in score-close possession metrics. Against a struggling that was also playing the second half of a back-to-back. Moral victories should be made of sterner stuff.

The Leafs need points to keep the season alive. They're now seventh in the standings (when you take out the top three metro teams). They have four regulation wins in their last thirty two games. At some point, Carlyle should just resign in disgrace even if he isn't fired, right?