A Few Notes On The Leafs' Recent Hot Streak

There is some good to be gleaned amidst all the statistical noise.

Share All sharing options for: A Few Notes On The Leafs' Recent Hot Streak

Most folks who are in any way connected to hockey's statistics community would describe the Leafs' current streak as a one of luck. The goalies get a little hotter, the shooters a little sharper, and with a bounce or two, the wins come together. But, in the words of HBO's original 24/7 series, "teams are never as bad as they appear during their lowest points, and never as good as they seem during their highest ones", so let's look at the good that has come with the bad.

The Good, Exhibit "A"

One aspect of the Leafs' recent surge that deserves a few words of praise is their breakout. The first periods of both the Montreal game and the Phoenix game were displayed some of the best breakouts the Leafs have put together all season, and while we'll get to the ugly side of this later, for now, let's look at a textbook play.

The fist highlight is carried out by the Leafs' 4th line (yes, you read that correctly) in their recent game against the Coyotes. The puck is dumped in by Phoenix, and Jonathan Bernier corals the puck, and backhands it safely away from a forechecker to Morgan Rielly. Jake Gardiner is back to give puck support if need be, but it isn't. Exactly like I described in my earlier post, Jay McClement has done his duty as a centerman and provided an outlet for Rielly but also circled deep to step in as checking support if need be. Carter Ashton is perfect here: he has kept himself between his man and the puck (excellent backchecking), has not swooped too low, and starts charging the other way while still keeping himself available as an outlet man. It's beautiful. 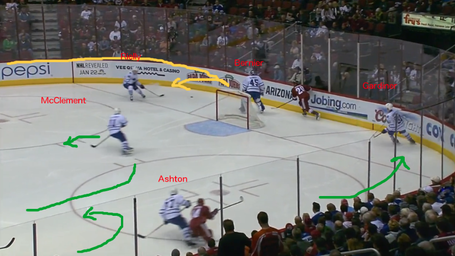 The next frame shows something surprising: Colton Orr is in position just above the hash marks in his own zone, his body open to the play, and he takes a flip pass from Rielly perfectly. McClement, Ashton, and Gardiner have all read this play correctly and have started turning up ice while Rielly hangs back. 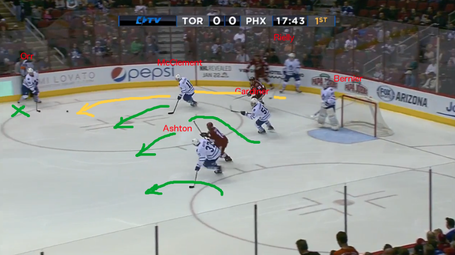 Next we have the borderline unthinkable: Orr completes a good, clean pass to Ashton, who by now has a head full of steam and is breaking up the middle of the ice as F1. McClement and Gardiner follow as F2 and F3. Orr doesn't really join this rush at any point, but it's probably because he's fallen back to fill in for Gardiner, who is actually useful on the rush. Bless both of them. 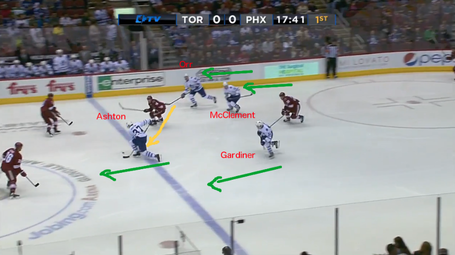 Finally, Ashton gets a bit of a lucky bounce in the neutral zone, uses his good speed to his advantage, and gets a great, near-breakaway chance on net. The Leafs did this a fair bit in the first period in Phoenix and out-shot the 'Yotes 14-12, which is great, considering they were eventually out-shot 41-29 in the game. 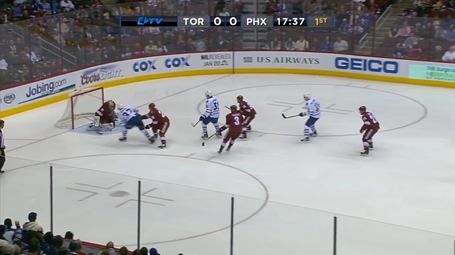 The Good, Exhibit "B"

The Leafs gave the Montreal Canadiens fits in the first period of their tilt last Saturday, and some of that was due to the Leafs not spending much time in their own zone. Why didn't they spend much time in their zone? It was partly due to Chris Hadfield singing the anthem, which "set the tone" (ba-dum-tsh) but probably more of it was due to the Leafs' backside pressure and regroups.

Here, the Canadiens' line of Plekanec, Gionta, and Eller push the puck up ice with numbers. They even have a defender skating wide of the play who might provide an outlet. Here's the good part: Tim Gleason knows he has another man back and sees two things: 1) Nazem Kadri cutting off a passing lane and pointing at the wide attacking D (great defensive communication); and 2) Nikolai Kulemin overtaking Gionta to nip at the heels of Eller as he carries the puck (i.e. backside pressure). 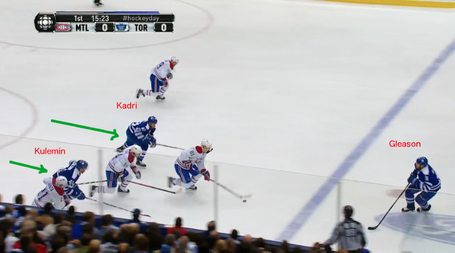 Because Gleason knows that Kadri and Kulemin are providing good pressure and cutting off passes AND that he has another defender skating behind him off screen, he can start closing the gap on Eller before the Hab even gets out of his own zone.

Eller is forced to chip the puck by Gleason or get trucked. He has no passing options and Gleason has correctly closed the gap by the time the puck is at the red line. The puck dribbles into the Leafs' zone, just over the blue line. 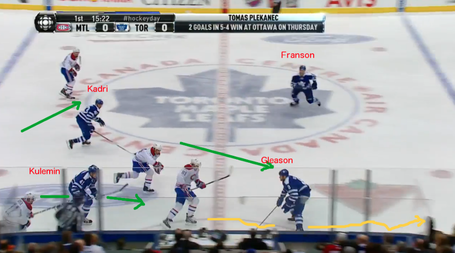 The puck is sitting just inside the line (out of view for the TV cameras) and Kulemin is in the perfect spot to pick it up now that Gleason has angled Eller away from it. Gleason gives Eller's stick a good whack just to make sure he doesn't pick it up. As soon as Kadri sees Kulemin take possession, he wheels the other way, smelling a counter-attack like a shark on a blood trail. 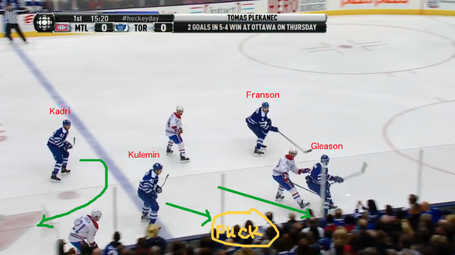 By now, we're into what is known as the regroup; where your team starts charging back the other direction from the neutral zone without having to defend it its own end. It's Kulemin who banks the puck off the boards, Lupul will touch-pass it to Kadri (who is wheeling), and the rush is on. You can see Franson's head turn and recognize this in the screen shot below, and he'll join the attack, too. 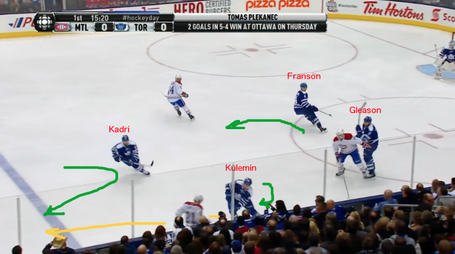 And what became of this rush, you might ask? Moments later, Kadri hit the Habs' line with speed and Alexei Emelin was found several minutes later, wandering confusedly on Bay St. Seriously, it was like the time we found grandpa at the bus station. Franson's heads-up read of the play nets him a goal. 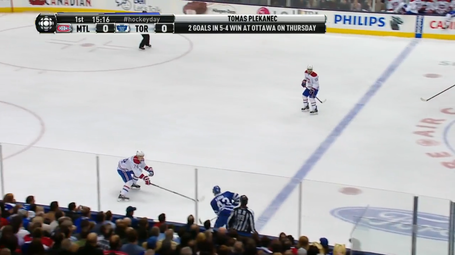 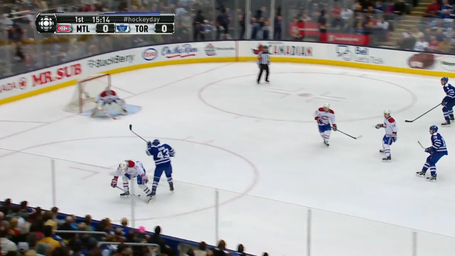 The Bad, Exhibit "The rest of the time"

The reason quick breakouts, backside pressure, and regroups are so important for the Leafs is that they are so easily manhandled down low in their own end. Mike Babcock said it more than once on 24/7. Randy Carlyle said it on 24/7. Even the Wings' bottom-six players were saying it in 24/7. The Leafs need to get out of their zone fast, or they get pinned down. I guess what I'm saying is, this isn't a big secret.

In the two periods that followed both the Montreal game and the one in Phoenix, the Leafs found themselves pinned in their own zone for lengthy periods and out-shot. My own observation for this is that the Leafs' wingers need to be at the half wall with a lot more consistency. When a winger (or on occasion the C) is not clearly on the puck first, things like this happen: 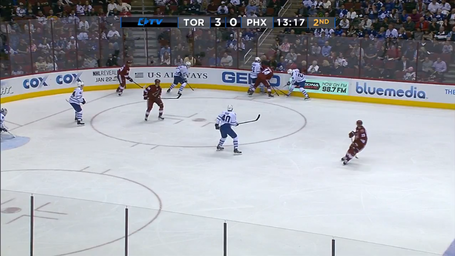 Because the Leafs are so weak when it comes to puck battles (especially along the wall), little scrums like this sometimes lead to big chances against. The scene above actually ended with a huge save by Bernier off a quick 2-on-1 one-timer from Phoenix.

I intend on exploring this phenomenon in more detail soon, because there has to be something Randy Carlyle is getting his wingers to do that has them too far from their half-wall breakout positions to have the time to make a play. But let's leave that for another time.

For now, let's appreciate that the Leafs are getting out of their zone quicker than they have all season.