Share All sharing options for: Leafs Steal Pity Point From Pavelec, Fall to Jets 5-4 in OT

Yet another game that got tough to watch quickly, but this time the Leafs came back to lose in overtime, rather than the first twenty minutes. Scheifele opened the scoring when the puck squeezed through Reimer (pictured above), then Blake Wheeler converted on the power play and the Leafs were down by two before the clock hit seven minutes. Phaneuf, being a great leader in the room, lead by example as he scored on the Leafs' second power play opportunity of the game. It was the first of four goals in three minutes, as Bryan Little and Zach Bogosian would notch two for the Jets, and Troy Bodie would bring it to 4-2. Team Gleason beat Pavelec to close out the period, and Phil Kessel would beat Pavelec short side to tie the game. In OT though? Bigg Buff gained the zone and scored a walk-off. Here's the game in six:

The Leafs' breakout really, really struggled against the Jets. And they've continued their PK strategy of "don't cover anyone." 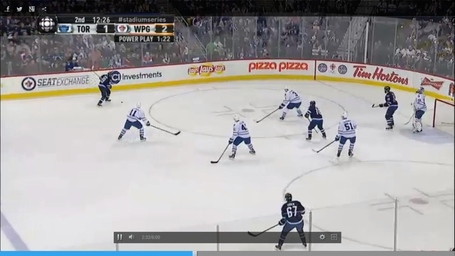 Byfuglien is off screen to the left, playing high on the umbrella-style PP. McClement is pressuring the puck carrier, Kulemin is watching the cross-rink pass, but the Leafs' defensemen are, uh, decorative, mostly. Gardiner is more than a stick's length away from his man, Phaneuf is fronting, I guess? Ladd has a perfect screen of Reimer and is completely uncontested, and the slap-pass ends up deflecting off Little's stick and in. Stuff like this is how you get a second-to-worst PK unit with 16th place 5v4 goaltending.

There were huge faults in front of him, but don't sugar coat it: Reimer didn't have a good game. The trickler between the pads, a five hole goal, and Little's PPG looks like it went under his pads. Not a great night for Kulemin either, as he bobbled a Gleason pass to give up the first goal against, and was on ice for more chances against than any other Leaf. Franson continues to look like a massive liability in his own zone (I'm split whether his 2-on-1 breakup was "nice poke" or "if Schiefele held up, that's a 2-on-0"), and he shouldn't be allowed to pinch - when it works, he fires the puck into someone's shins, and when it doesn't work, he's out of the play for good.

Kessel is great, and Bodie's shot was nice, but I think both of them got a Pavelec bonus - how anyone can look at the Jets and say their biggest issue isn't in goal is beyond me. Even Tim Gleason scored on him - that's the same Tim Gleason who hadn't scored in over two years. And it almost cost the Jets the game. Watching the assists on those goals reminded me why I hate seeing the Leafs dump-and-chase. In both cases, the Leafs carried the puck into the zone, made a little space for a guy, and passed the puck - for Kadri, three or four Jets collapsed on him; for Ashton, the drop pass worked perfectly.

It ain't pretty, but it's a point. Although they're top three in the division now, the Leafs are tied for league lead in games played - it'll be interesting to see whether their banked points will keep them in the hunt (they're 5th in the East by points percentage). Next game is Tuesday, against the Tampa Bay Lightning.