Our glorious game is flourishing in yet another non-traditional market.

Share All sharing options for: KHL Hockey in Croatia

Ever since I moved to Budapest, Hungary, I've been meaning to get to a KHL game. The Russia-based league has grown by leaps and bounds every single year since its inception, and shows no signs of slowing down, with Jokerit of the Finnish SM-Liga set to join the party next season. The league obviously has some great players, but I've been wondering for some time how it stacks up against the NHL both in terms of the quality of play and that of the in-house experience for fans. Zagreb, Croatia, home of Medveščak, didn't disappoint.

The scene was set at Arena Zagreb, which is found just outside the center of the city. From the heart of the old town, it's only a 10-minute cab ride, and traffic around the arena was very well managed. The game was sold out to 15,200 people and roughly a quarter of the rink filled up to watch the teams warm up 45 minutes before game time.

Medveščak normally plays in a much smaller arena, which holds only 6,400 fans, but I am told that this is in fact a much louder building because the acoustics there carry fan/game sounds better. As a matter of fact, these two arenas are the only two indoor rinks in the entire country. They have two other outdoor rinks (there was over a foot of snow there when I arrived) but weather can be unpredictable in the winter. In any event, Arena Zagreb is a great facility, with clean sight lines no matter where you sit.

When the players were introduced right before game time, you'd swear you were at an AHL game (a really well-attended one, anyway). Not only is much of Medveščak's roster filled with former AHLers (and a handful of former NHLers - hello, Jonathan Cheechoo), but they entered to The Black Keys and Kanye West. Just like back home, most of the other journalists complained that the music was often too loud in the arena, and discouraged fans from making their own noise.
Both the Croatian and Russian national anthems were played because Medveščak's opponent for the evening was Lokomotiv Yaroslavl - yes that one. There wasn't any singer (which I honestly prefer) and players just faced a collection of all the flags representing the different countries in the KHL in the rafters as they listened to a recording. The fans didn't sing along, but they made plenty of noise later. 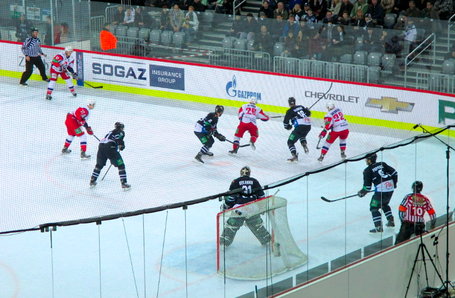 Mislav Jantoljak (@Xterratu) made a good point while we were at the game: Medveščak is a good barometer for the overall quality of the league since most of their team is made up of North American AHL players. Most of them were solid AHL players, but few of them were top-tier. As of this moment, Medveščak has all but clinched a playoff spot, sitting 6th in a conference of 14, and 11th overall out of 28 teams. In other words, a mid-range AHL team is better than most teams in the KHL. It's true that a couple of the top teams in the league could probably compete in the NHL, but Medveščak keeps up with the best of them, so it's unlikely any of these KHL teams would be serious threats for the NHL's playoffs.
To the eye, the play was obviously less physical, with fewer players finishing checks along the boards and open ice contact being quite rare. There were no fights, and hardly any post-whistle scrums to speak of. NHL players are quite obviously stronger, faster, and overall more aggressive. Jantoljak noted that many of the KHL's players don't exert themselves quite as consistently as they do in the NHL. At least on Saturday, this appeared to be true - the teams weren't grinding each other down like you see in the NHL. I don't think this makes for better hockey watching per se, but over the course of a season, you can see why wearing down your opponents could make for a competitive advantage.
The former NHL players certainly looked good, though aside from Jonathan Cheechoo and Lokomotiv's starter Curtis Sanford, there weren't many players who would be considered more than marginal NHLers. Cheechoo has 34 points in 49 games and Sanford has a .942 Sv% on the season so far.
Lokomotiv has been struggling to keep a coach for long, and to be honest, it showed. Their breakout was a bit of a mess, and the power play was a bit disorganized, too. They kept two defenders on the blue line for the duration of their zone time on five separate power plays, keeping a centerman and the weak side winger in front and just beside the net, respectively.
I spoke with Mark French, Medveščak's coach, after the game at the team press conference (in which opposing coaches sat side by side, which was weird) about what they did to disrupt Lokomotiv's breakout and he said that they tried to send their forwards deep to prevent any early stretch passes. I noted Lokomotiv's forwards were leaving the zone early and French appeared surprised to hear a journalist making such specific observations - most journalists here in Croatia are still learning some of the ins and outs of hockey.
For those of you who are fans of the CHL, you know already that solid positioning and tight defensive work aren't always the most fun to watch, and from a fan's perspective I can in some ways appreciate this kind of hockey even more than most NHL teams. Lokomotiv lined up 4 players at their blue line while defending the rush for certain parts of the game, but although there is less chip and chase in the KHL, Medveščak generally found a way to break through.
All in all, the game was very exciting. Although the score was only 1-0, there were plenty of close chances and drama. Lokomotiv appeared to have tied things up in the second period, only to have video reviewers decide that the puck never quite crossed the goal line. The Russian side pressed hard through the last half of the third period for the equalizer to no avail, with Medveščak earning 3 points for the regulation win.
Surprising to me was that after a simple regular season game, the teams lined up and shook hands. In North America, this is normally reserved for tournament play, but I like the idea. Also, as the home team was victorious, the saluted each side of the rink by lining up in a straight line, parallel to each of the side boards and end boards in turn and skating forward really quickly. It was an interesting little display, and the fans ate it up, as they all stayed standing at their seats a good 10 minutes after the final buzzer to keep cheering.
For more info on the game, check out the recap at Jantoljek's website KHL.hr. He's got lots of good KHL info, including this interview with former Leaf Leo Komarov. 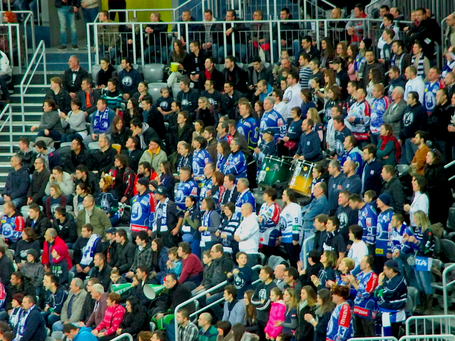 If any of you have been to see a soccer/football match in Europe, you'll have a much better idea of what the fans here are like. Canadian beer commercials are always trying to tell us what hockey hooligans we all are, but to be honest, our fandom is downright sedate compared to anything across the pond.
This was one of the best live hockey experiences I've had the pleasure of watching, and it was certainly better than most of the Leafs' games I have been to. The Air Canada Center sounds like a library compared to Arena Zagreb. Medveščak has something of a booster club that takes up an entire section in the stands. the group has 2-3 giant tom drums that are almost constantly pounding different beats that the crowd absolutely screams along to while the play is going, and the arena is quite frankly worse off when they go back to playing Kanye West or whatever else they decide to blast from the PA system. This gave the whole game a totally different energy than back home. Fans know and sing along with these chants/songs, and it's easy to see how such support could encourage a team playing at home.
Other similarities between soccer fans and these hockey-crazed Croats include the fact that instead of booing a bad play or bad call, they whistle. In fact, when an arena maintenance man came out to re-drill the hole for the net pegs, fans started booing him as if to say 'just get on with it'.
Over the PA, they do many of the same things as back home including contests, charity drives, or requests to hash tag your instagram images so they can be displayed on the jumbotron. At one point, during a "Let's make some noise!" push, the sound level in the arena hit 132 dB. This arena was unfortunately not set up to show replays on the big screen, (though that suited me just fine - just watch the game) but it is on most nights. Penalties and many whistles (offside or icing) were announced to the crowd both in Croatian and in English. For some games they also add Russian, even in Croatia.
Three other notes: first, I was disappointed to see that the arena employed "ice girls" during stoppages to clear up the edges of the ice. I suppose their get-ups weren't any more revealing than what you'd see at a figure skating competition, but it's just unnecessary. The second note is that during the second intermission, an attractive young woman was called down to centre ice over the PA system. One of the mascots said something to her and she whipped a puck at him. Then, he took off his giant head, got down on one knee and proposed. She said yes, and they got a huge cheer. Lastly, they don't stop serving beer after the second intermission here. I understand the reasons why NHL teams choose to do so, but it still strikes me as puritanical.
The crowd is what really makes KHL games a great fan experience, and I'm very eager to check out a game in nearby Bratislava, where I've also heard great things about the fans. It's fantastic to see hockey thriving in lesser-known markets, and I would strongly encourage anyone who has the chance to go. It really puts most NHL experiences to shame.
Here is just a taste of what the arena was like though pretty much the whole game:
And here's another: