Trying To Predict The Leafs' Record In January

Another stab at predicting the Leafs upcoming results

Share All sharing options for: Trying To Predict The Leafs' Record In January

So at the end of November, I predicted the Leafs would go 4-9-3 and earn a whopping 11 points in December... they outperformed my guesstimate by producing 15 points.  The thing is, I wasn't quite exact enough with my description of my calculations.

See - in statistics when you have probabilities you can actually calculate expected outcomes by multiplying each potential outcome by it's probability and adding together the results.  Thus if I had multiplied each of the game win probabilities by 2 (the number of potential points available in each game) and totaled them, I'd have been able to describe the Expected number of points for the Leafs in December.  If you do that with the values I provided here - you'd have gotten an Expected value of 15.31 points for the month - pretty damn good frankly.

So maybe the method is REALLY super accurate... maybe not.  In an effort to continue working on comparing my predictions to reality I'm going to throw up the Leafs schedule for January and the win probabilities for each game determined using the log5 method.  This time I'll share the Expected Point total as well as my prediction of their record, that way we can see how accurate the predictions are after the fact.

First here is their schedule, and the various numbers you'll need to see to follow along:

And just to be sure we're clear about it going in this time, the Expected Point outcome of this set of 14 games is 14.146 points (which aligns nicely with my predicted 6-7-2 record).

Now - obviously some of these will be a crap shoot.  Last month, I had the Leafs losing 3 games in OT, and my prediction called 2 of those successfully. In fact, the prediction was correct in 10 of the 16 outcomes. In the other 6 games the prediction called for 1 OT/SO Loss, which the Leafs won in a shootout (vs. the Ottawa Senators),  and a Win and two Regulation Losses, that in reality went to OT and ended up as an OTL (Buffalo), OTW (Dallas), and SOW (Phoenix).  4 of the 6 misses were decided in extra time and frankly I'm not upset if the predictions are coming that close.  The only complete misses were the win over the Chicago Blackhawks and the loss to the Florida Panthers.

I'm pretty sure I covered some of this with the following:

"A couple of points worth noting. First, two of those four wins are slated to be over Buffalo - and we know the Sabres play the Leafs tough (they've already beaten us once this season). Secondly, the other two expected wins come on a Tuesday night against Florida (we know how those workout right?)"

So obviously I know reality doesn't always align with predicted outcomes. Bearing this in mind, I personally think there's a decent chance we lose Saturday night's game against the Rangers. The Blue Shirts just got spanked by the Penguins and had a player's only meeting immediately afterwards.  They are seeing the Leafs on the 2nd half of a back to back, but I expect them to be energized and a bit more focused than the Leafs, particularly coming down after the craziness of the Winter Classic.

We also have a win listed in there against the Buffalo Sabres, who have improved drastically since Ted Nolan took over as their head coach. How much have they improved? Well I posted this graph on Twitter earlier today showing the rolling 10 game Corsi For % for Toronto, Buffalo, Edmonton, and Washington.  Notice how Buffalo has improved a lot since Nolan came in, and the Leafs continue to suck? This is a problem. 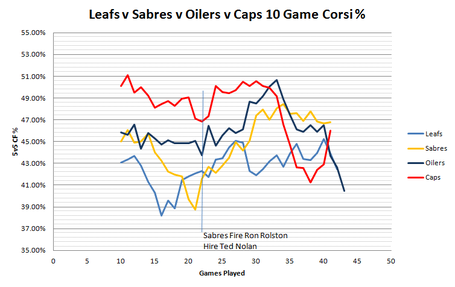 Oh and I am aware this posting includes the Winter Classic (which was predicted as a win, I didn't make that up).

So now that Dion's contract is dealt with, and the 24/7 cameras are gone, we can expect the nice little win streak to make everyone forget how crap this team has played in December. Then they'll lose a bunch of games and we can all freak out all over again.  If they end up with 14 points in January, that's 29 points of a possible 60 over a 30 game stretch (0.483 hockey!).  Do we really think this team is destined for the playoffs?  Let me know.

If you have any comments, questions, or concerns feel free to share them with me in here or via twitter.