Leafs Earn Themselves a Classic Victory

In front of one of the biggest crowds in hockey history, the Toronto Maple Leafs sent tens of thousands of fans back across the border with smiles on their faces.

Share All sharing options for: Leafs Earn Themselves a Classic Victory

This game was over two years in the making. Announced in February 2012, the 2013 NHL Winter Classic was supposed to be a game to be talked about for years, if not decades to come. Proposed to the NHL by the University of Michigan after selling 113,000+ tickets to "The Big Chill", having the Red Wings host the biggest game in league history seemed like a no brainer. But to make this happen, they needed a worthy opponent. Not just a good team, but a team who's fanbase would be equal to the task of filling up this stadium.

Enter the Toronto Maple Leafs. Despite the five hour driving distance between the Air Canada Centre and Michigan Stadium, the feeling was that Leafs Nation was so rabid and plentiful, that they'd find enough people to make the trip. From the moment they sold the tickets, there was no doubt they made the right decision. While the game being postponed a year to the lockout should have thrown a wrench in many people's plans, half the building still ended up looking like the ever-so-marketed "Sea of Blue". It was loud, it was cold, and it was visually breathtaking.

Oh, and it was a regular season NHL game. Yes, despite all the festivities and feel good thoughts, the Leafs and Wings were fighting for sole ownership of the fourth spot in the Atlantic Division on Wednesday, and won 4-3. 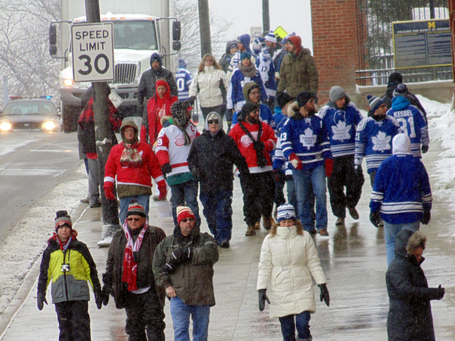 Soon as you began to approach Michigan Stadium, you began to have a few realizations. One, the weather truly fit the billing. I had the benefit of being up in the press box for most of the day, where we had windows and heaters blocking us from the elements, but those in the stands or wandering around pre-and-post game were braving temperatures in the negative double digits (Celsius) and heavy snowfall. Friends of mine in the stands had some of their drinks freeze up before they could even finish them. But did that stop anybody? A select few who decided not to show up, sure, but those who came down still made the most out of their experience. Tailgating was plentiful, and even the odd street hockey game went down in the parking lots: 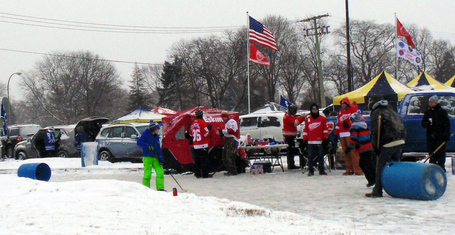 Once inside the building, fans were treated to a commemorative seat cushion and a pack of hockey cards, and had the ability to splurge on other merchandise and dozens of food and drink options, including "spiked" coffee and hot chocolate.

Efforts were made by both teams to ensure that the fanbases had a 50/50 split of the building. In this regard, they were surprisingly successful. The west side of the crowd looked distinctly blue with small red spots, and vice-versa. If I had to guess, more Leafs fans were in Detroit's half than the other way around, but it wasn't significant enough to really call uneven.

Continuing this neutral-site trend, the league also stuck with their time splitting rules from previous winter classics, despite no significant light or wind difference in either direction by the time the ten minute mark of the third period mark came around. This turned out to be a bit controversial in overtime, when a Detroit rush was blown dead at the 2:30 mark, something that absolutely would not have happened in a normal situation. The shootout, on the other hand, was all done in the Toronto half.

Overall, if you were able to tolerate the weather, it was ensured that you had an awesome time and that you were likely surrounded by your own fans. Not that there were any problems, with friendly chirping appearing to be the worst that went down, but it still made for a better experience.

Well, except for trying to make your way out of the building. 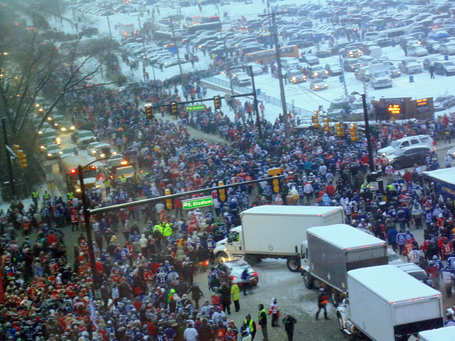 At this point, I'm pretty sure we all know the end result, but it's still worth running through again. After what seemed like an eternity to get through the pre-game ceremonies (probably for the best, as it let people get in on time), the two teams began what can be described as an opening period of adjustment. As the two teams tried to get themselves used to the rink and conditions. Detroit seemed to figure it out quicker, with 13 of their 14 shots hitting Jonathan Bernier the net in the first period, while Toronto attempted nine and hit the net five times.

The most important moment from the first period was Joffrey Lupul's penalty. An obvious cross-check to the neck of Patrick Eaves sent him off for two minutes, and as we found out today, earned him a maximum $10,000 fine. Eaves missed the rest of the game and may have suffered a concussion from the play. There was a definite risk of a suspension on Lupul's part, many feeling that he got away lightly.

The first goal of the game came midway through the second period, courtesy of Daniel Alfredsson, sending the crowd into a mixture of cheers, and extra-strength boos (because, well, Alfredsson). The lead only lasted six minutes, however. Rewarded for their best period of the game, the Leafs tied things up just milliseconds after their second and final powerplay of the game expired. A wrister in the slot, the goal was a half-spin away from being a JVR stereotype.

Detroit went back to controlling the game in the third period, littering Jonathan Bernier with as many shots as they possibly could, but it was the Leafs who took the lead with four minutes left. This was a goal that showed the disadvantages of poor sightlines, as nobody in the crowd or press box could seem to put their finger on who scored, and if it was a legal goal. Ultimately, the referees ruled that Tyler Bozak was the one who tipped a Dion Phaneuf wrist shot, and that his stick was in a legal area.

Predictably, the Leafs went into shutdown mode, as they usually do. This time, the "poor conditions" excuse was there, but like many times before, it came back to haunt them, as Justin Abdelkader tipped in a Brendan Smith shot with five and a half minutes to go.

Like six of the other eight outdoor games in Michigan this week, this one required extra time, and eventually a shootout. Pavel Datsyuk was the first to score, but also the only one to do so for Detroit, as Lupul and Bozak came through with the tying and winning goals to seal a historic night. 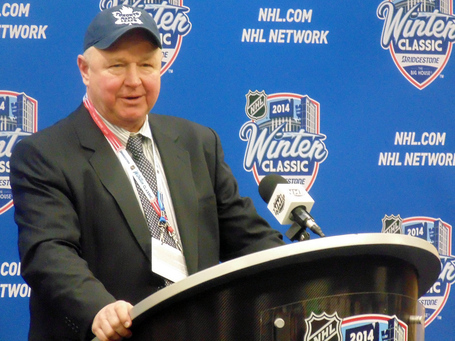 Randy Carlyle was really happy with the setting of the game, and spared no time explaining it.  "I just think that the venue is a raucous type of atmosphere, which I expected. And the weather definitely changed the way it was presented with the snow coming down. And it brought back a lot of memories from a childhood of playing outside."

With that said, he was also aware of the difference in pace. "I don't know if we would call it a gem from a pace standpoint, but there was a lot of snow and a lot of things to deal to with."

He also took the opportunity to deliver heavy praise for Tyler Bozak, who now has four points since returning from his injury. "Tyler is a player that our coaching staff trusts, pretty simple. And when coaches trust people, they put them in situations where you believe the player will get the job done. And Bozie's a guy that can kill penalties and take the power play and takes important faceoffs."

"If we had a model for the younger players to follow, it would be Tyler Bozak as far as the confident player, not a big guy but he gets in the way, he gets inside, he wins his share of one-on-one battles, very strong in the faceoff circle, and he's got the hockey sense. The puck follows him around." 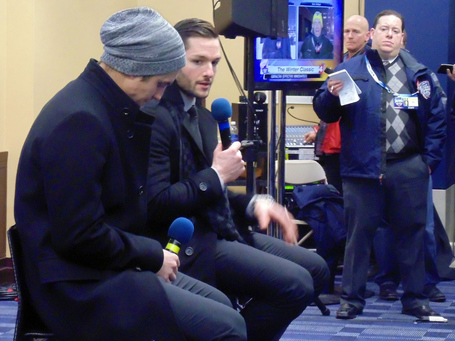 Bozak mentioned the benefit of getting a game in beforehand. "Yeah, I think that I was able to play one game before, it was huge for me. Definitely would have been crazy, just coming back into this game. So I think being able to play the one before really helped me a lot. It was pretty fun, though, I think. Everyone had a good time. Like he said, we're going to remember this one forever."

Carlyle also touched on Jonathan Bernier's increased opportunity to play. "Right now Johnny is on a little bit of a run, and as long as he continues to provide us with the level of goaltending he has, it would be foolish for us to look another direction."

As much as many would like to see James Reimer get more games in, it's hard to argue with Bernier's performance of late. He found every way to make sure he was ready to go for this game, stuffing hot packs in his pants and attaching a toque to his helmet to cover the ventilation holes.

The Leafs came out of this game, the highest attended in NHL history, with a bonus point over a divisional rival, but with stories to tell and memories to hold on to forever. Or, at least until 2017, if you believe the rumours that MLSE plans to expand BMO Field so they can one day be the home team. We'll see what comes out of that, but for now, the next date of concern is tomorrow night, as they take on the Rangers at the Air Canada Centre, a much warmer and more traditional venue.