David Clarkson was signed by the Leafs to much fanfare on July 5th, 2013.  Things were going so well by December that Chemmy wrote a post about the cost of buying out the Monster from Mimico after his first season.  I happened to be thinking of the very same thing this afternoon and was giving Clarkson's buyout page some Kessel-style sexy eyes.

What I had forgotten was this piece written by mc79hockey (he has since added more today) back on July 9th that discussed the rather unique nature of the structure of Clarkson's contract.  Specifically, that the vast majority of Clarkson's money was [possibly] guaranteed via signing bonuses due every summer.  In fact, Clarkson's actual salary over the course of his contract, ignoring bonuses, is only $9m.  His bonus money accounts for over 75% of the value of his contract.  Mirtle brought this back to my attention earlier today, and it got me wondering just how awful Clarkson's buyout would look if we assume all of his bonus money is guaranteed (ie the Leafs have to pay this money out regardless of a buyout).  I played around with excel and took a stab at figuring out Clarkson's buyout numbers (Note: I'm not swearing by these but hoping they are fairly close): 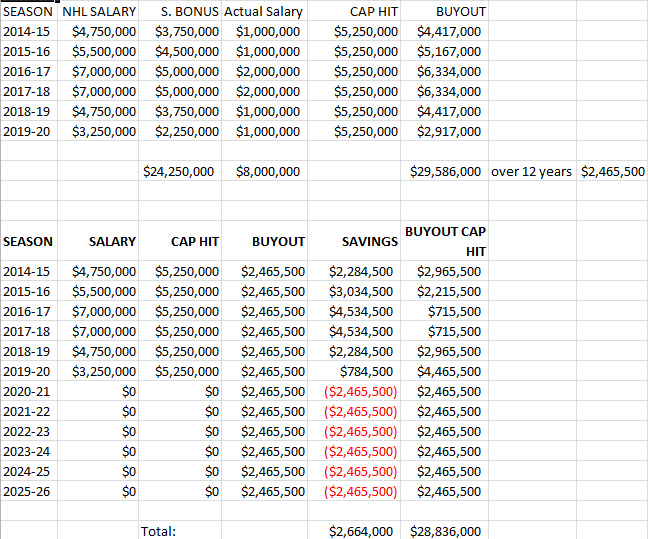 It would appear that the Leafs, in their infinite wisdom, managed to give David Clarkson what is perhaps the NHL's first buyout-proof contract.  Including the $4.5m he is earning this season, a buyout this June would net Clarkson something like $34m; or roughly 93% of the total value of the contract. A buyout would save the Leafs almost nothing ($2.6m or so).  All in all, the only hope Leaf fans have is that Clarkson finds some way to contribute on a regular basis for the next 4 seasons or so.

The potato definitely had the better July.