It's a Duck Hunt reference.

The Leafs scored on two odd man rushes and a "Phil Kessel is faster than you" breakaway, and Jonathan Bernier stood on his head stopping 43 of 44 shots on net. This is a game the Leafs didn't have any business winning and yet they Leafed as only they can Leaf and won. I mean seriously, look at the Fenwick chart: 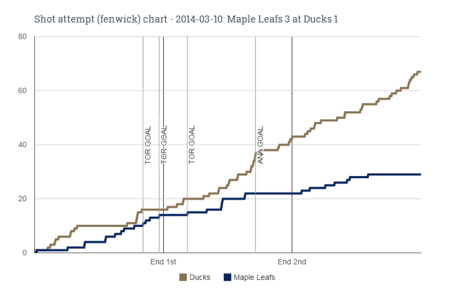 The Leafs scored 3 goals with only 15 attempts taken at the net. That's ludicrous. Now granted, when you only get  breakaways and odd-man rushes, shooting percentage tends to get a little inflated but not like this. From then on, the patented Randy Carlyle shell game was in full effect and I'm certain Jonathan Bernier's mighty sore from stopping so much rubber.