How Not to Execute a Set Play

Face offs are one opportunity for the coaching staff to implement set plays. Unfortunately, in a crucial time in last night's game, the play didn't really seem up to snuff...

Share All sharing options for: How Not to Execute a Set Play

Last night with 3.7 seconds remaining in game against the Red Wings, down by a goal, the Leafs conducted what was maybe the worst run set play I've ever seen at the NHL level. Everything about it was terrible. The player selection, the handedness selection, the formation, the mass confusion among players on the ice, and nobody going where they're supposed to once the puck was dropped. Nothing went right, or was even set up to have the possibility of going right. I'm going to breakdown for you, just what exactly was so bad about it.

Let start with the player confusion. Nobody knows what the play is, or where they or anyone else is supposed to be on the ice.

"I think you're supposed to be here." - Franson to JVR 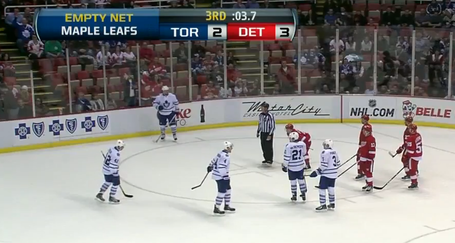 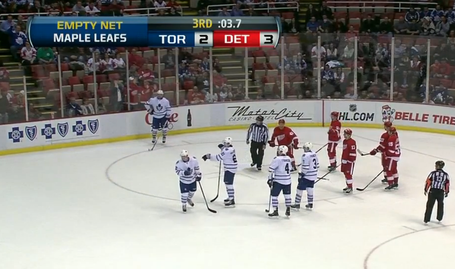 "Are we in the right place?" - Everyone looking to the bench for direction. 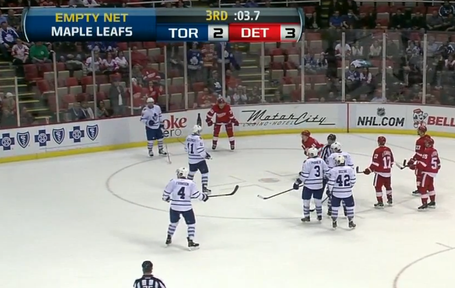 How can a group of professional hockey players be so confused as to their assignments? Maybe it's because their coach already wasted his timeout earlier in the game and was shouting gibberish from the bench. I was watching the game and thought to myself "Why didn't Carlyle take a timeout here? I can't remember him taking one in this game." So I went through the play-by-play to see if Carlyle had indeed already used his timeout. Turns out he did.....immediately after JVR scored to pull the Leafs within one.

That's right. Randy Caryle called a timeout on the ice during a stoppage in play AFTER the Leafs had scored a goal for a neutral zone faceoff. Why did he do this? Apparently it was so he could double shift the JVR-Bozak-Kessel-Lupul-Phaneuf-Franson sixsome after they had just been out for a 57 second shift, because that's exactly what he did. I frankly can't see the logic in using the timeout in that situation rather than putting out Kadri's line for a quick 30 second shift while the top guys took a breather. Rather than a breather, in my opinion it would have been better to save the timeout to setup an offensive zone set play, or ya know go over just such a situation during the timeout called. Carlyle did neither of these things and that's why the players were so confused.

Eventually the Leafs got to the positions they thought they should be in and it looked like this:

There's a lot wrong going on here for the Leafs and a lot right going on for the Wings. Let's break it down.

First the right for the Wings. They're set up exactly as they should be. They have a right handed centerman to win the puck back into the corner which effectively ends the game. They put three lefties on the hashmark in front of the goal. With them all being lefties, a) their sticks are on the side of the Leafs players and ready to tie them up, and b) on the correct side to clear a puck in the slot away into the closest corner on their forehand which is a stronger play than the backhand. Then you have the Wing along the boards. He's also a leftie which means a) he's got a longer reach towards his right shoulder which is where Kessel is setup, and b) a swinging motion of the stick comes across the front of Kessel and away from the goal. Were he a rightie, he wouldn't be able to swing his stick at Kessel should Kessel get the puck off the faceoffs because Kessel's legs would be in the way. Also, you can see that he's up on his toes and ready to push off, not towards Kessel, but towards the shooting lane so he can get his stick on the shot should it come. This is a well coached Wings team.

Now you look at the Leafs and it's nothing but wrong wrong wrong. Let's take this to the whiteboard and recreate how Carlyle would have drawn this up had he not wasted his timeout.

(To show handedness, the extra 90 degrees of PacMan are on the side of that player's stick.) 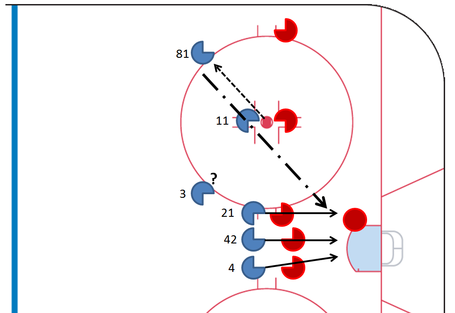 I put a question mark over Phaneuf because I really have no idea what he's supposed to be doing. The Wing's centermen is trying to win it back to the corner. McClement is trying to win it back to Kessel. How would the puck ever come to Phaneuf in this situation? The rest of the guys should just get to the net, setup screens for the Kessel shot, and then find rebounds. This of course begs the question; why is Cody Franson on the ice? If he's not going to be used for the point shot, then why is he even out there? He's got hands of stone. Put out Lupul, or Kulemin, or Bodie instead; big bodies with good hands and a nose for the net. Terrible player selection by Carlyle.

Now let's look at handedness. The puck is on the left side of the ice. McClement is a leftie and Bozak is a rightie. The faceoff is on Bozak's strong side, and yet McClement takes the draw on his backhand for some reason. (Yes I know he wins it, but still what's the thinking here?) I get Carlyle having two centermen on the ice in case one gets tossed, but McClement wasn't tossed so why wasn't Bozak taking the faceoff on his strong side Plan A?

Now how about positioning. Again, Phaneuf is literally in no man's land here. He either needs to get up on the hashmarks and to the net, or he needs to be on the half boards running interference for the Kessel shot because the Detroit winger over there has an uncontested route to Kessel and the shooting lane. Look at what happens the moment Kessel gets the puck.

If Kessel's able to control the draw (he isn't) the Wing coming off the boards is in perfect position to deflect the shot with his stick (you can see him starting to swing his stick like I talked about earlier). Phaneuf hasn't moved a single inch yet again reaffirming the point that he's useless here.

Now let's look at JVR, Bozak and Franson (who again shouldn't be on the ice). If we give the play a half second to develop, this is what we see.

JVR, the Leafs' best net front guy is being used as a screen 20ft out for some reason. While I think this shouldn't be his duty, at least he's in the theoretical shooting lane.

Bozak is also in the shooting lane looking to set up a screen on a Kessel shot.

Cody Franson is a defenseman and has no fucking clue what he's doing. He's literally skating off in a line towards the opposite corner and not driving the net like he should be.

Phaneuf still hasn't moved an inch. If the drawn up play were a Kessel pass to set up a Phaneuf one timer, then a) that's terrible use of Kessel, and b) doesn't make sense because the other 3 Leafs have all vacated Phaneuf's shooting lane. Phaneuf is again useless here for yet another reason.

The Detroit winger is now fully in Kessel's shooting lane. Even if Kessel handled the draw, he wouldn't have been able to get a shot off.

Were I holding the whiteboard, this is how I'd have drawn it up (because I wouldn't have wasted my timeout earlier): 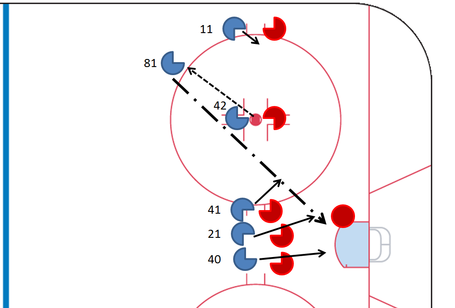 Bozak takes the faceoff on his strong side to draw it back to Kessel. My center backup in McClement is running interference for the Kessel shot. Kessel's job is to get the puck, walk in and fire through the screens.

My three biggest forward bodies, Kulemin, JVR, and Bodie are on to drive the net like a Running of the Bulls on ice. I've got a leftie in JVR going to the left side for a short side rebound, and a rightie in Bodie going to the right in case of a far side rebound or a bounce off the back boards. I chose Bodie over Lupul and Clarkson because he's a bigger body and just needs to plow through the Detroit players. I don't need finesse (Lupul) or falling down (Clarkson).

Phaneuf and Franson are off the ice because I don't need their shots if Kessel's my trigger man and I've got better hands in similar sized bodies with the three forwards above.

That's how I'd have done it, but hey I don't have a Cup ring so what do I know?