Share All sharing options for: The James Reimer Situation

With so much being made lately about James Reimer's recent cold streak and Jonathan Bernier's ascension to the de facto number one goalie spot, there has been a lot of debate about how well things are being handled by the Leafs' coach Randy Carlyle. Particularly worrying to some fans are the implications of this situation for Reimer's future in Toronto and indeed, it looks like he's not long for the city.

It's entirely debatable whether or not Reimer has been given a fair shake by Carlyle so far this season, and it seems to be a chicken-and-egg debate. Reimer hasn't played as well as Bernier has this season but it's also true that he's seen less playing time and he's arguably been on a shorter leash in terms of tolerance for poor games. My own thinking is that as a professional athlete, you have to make the most of every opportunity you're given to prove yourself (since chances can be few and far between) and in a game of millimetres and milliseconds, all a coach can do is go with the better guy, no matter how marginal the difference. Some folks are quick to point out that the likes of Colton Orr, David Clarkson, and Tim Gleason have had more than their fair share of chances, but whether or not they play is a very different issue that deciding which goalie gets played.

If we take a look at both Leafs' goalies' numbers so far, it's not tough to see why Carlyle would go with Bernier more often than not, and Reimer's short-term trend doesn't look great: 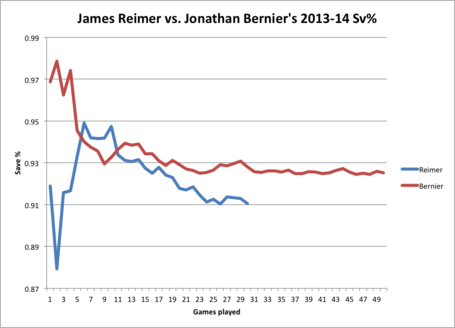 So what to make of Reimer's season thus far? He's currently sitting at a .911 Sv%, which is a bit under his career number of .914, but it's not like it's drastically lower. It's true that Bernier's numbers have been significantly better (as of this moment he has a .925), but you have to wonder how long that will last. For now, it looks extremely steady, as he's been at roughly .925 since about the 15-game mark.

Of course, expanding our sample size is our best bet if we'd like to make even remotely educated guesses about the future - not that we have tonnes of data to go on - but here is what their careers look like: 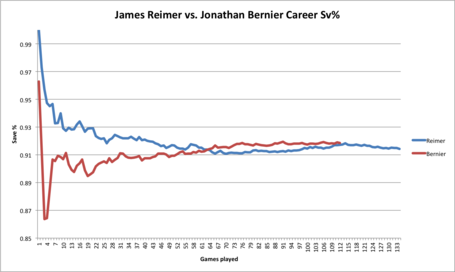 At this point, Bernier's career number is .917 while Reimer's is a .914. Given that we're dealing with pretty similar sample sizes at this point (112 GP for Bernier and 134 for Reimer) they seem closely matched in terms of their talent so far, and given how close they are in terms of numbers it's a toss-up which of them will wind up with the better career.

Here's what I think we should take away from this: if you're a team like the Toronto Maple Leafs, a team that relies HEAVILY on excellent goaltending, why would you risk losing either one of them just yet? Reimer is an RFA at the end of the season, and it seems to me that the Leafs could probably placate him and convince him that the starter's role is still up for grabs. Reimer's deal pays him $1.5M per season right now, and he's unlikely to get a massive raise in the summer, so if you consider the fact that Dave Nonis is unlikely to acquire a more cap-friendly (and effective) backup goalie, why bother trading Reimer for a 2nd round pick? If you can package him for someone who really helps the defence then fine, but marquee defencemen aren't exactly easy to come by.

For now, yes, Bernier has been the better goalie, but given how close Reimer's career numbers look, why not hang onto him for when Bernier hits a similar cold spell?