A quick look at Detroit's netminding offers Leafs fans a window into the Leafs' past, present, and future.

A reminder: not even Detroit can fix Jonas Gustavsson.

It was three seasons ago that the Leafs began their October schedule with Gustavsson as their starting goalie. A young James Reimer had yet to make much of an impression at the NHL level, and Ben Scrivens' NHL career was but a twinkle in Ron Wilson's eye. The hours and virtual ink spent lamenting the Leafs' lack of goaltending was a perennial concern, and hopes for hockey past April seemed distant, indeed.

Ah, how times have changed.

The Leafs may still only be a bubble playoff team, but at least decent efforts by offence-first guys like Phil Kessel, Joffrey Lupul, and Nazem Kadri aren't being undercut by night after night of soft goals at the other end. Although we watch many games through our hands clutched over our faces, the Leafs' goalies have given the team a chance to win pretty much every game so far this season.

Sometimes when I needed a good laugh last season I'd go over and look at Gustavsson's numbers with the Wings. In only 7 games, he had posted an .875 Sv%, and Brian Burke had actually managed to trade that level of competence to the Wings. It was like trading someone the measles for 5 cents.

This season has been a little different. Gustavsson was actually posting very very strong numbers to start the season, and although I never really worried that it was anything but a blip, it's nice to see that "The Monster" is returning to form, and just in time for Detroit's playoff push: 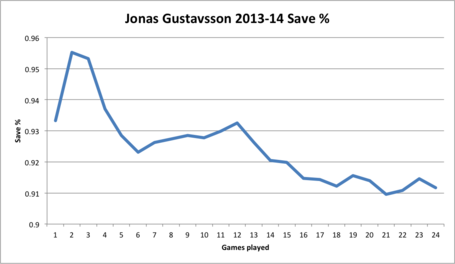 Remember when people would point to a hot streak for Gustavsson and say that we (here at PPP) were wrong about him, and that Gus was just a step or two away from "putting it all together"? Then, many of those same people told us that Gus was likely to look great behind a Detroit team that played a better possession game and had better defenders?

Detroit's starter, Jimmy Howard, has been having a rough season by his own standards. His .912 Sv% is currently the same as Gustavsson's, which must only make the dip in his performance all the more frustrating. 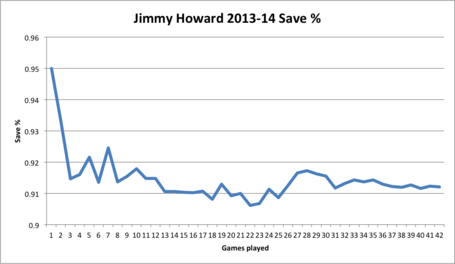 Just look at how Howard's career stacks up against that of Gustavsson: 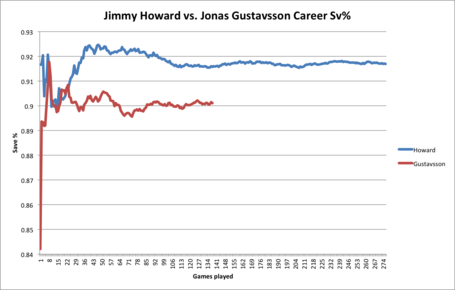 Gustavsson may have a few more games of .912 goaltending left in him at the NHL level, but that career Sv% line of his is unlikely to move very far off the .900 line in this graph for long. Even if Howard is cold this season, there's really not good reason to ride Gustavsson until he falls apart -- we already know he will.

At this point, Howard's career looks an awful lot like what we might expect from the Leafs' Reimer in a few years. Both goalies spent a couple years in the AHL before breaking into the league in their early 20's and although Reimer started playing more regularly than Howard at a younger age, that probably speaks more to the Leafs' goaltending troubles than a real difference in talent. So far, Howard's career is a .917 Sv.% while Reimer's is .914. Reimer may still have some improving to do, but overall, we're dealing with pretty similarly talented players.

What I'm getting at here is that we should expect Howard to bounce back, whether it's this year or next. This season, he's had a few injuries, including a knee problem that saw him miss 8 games, along with a couple other minor bumps and bruises that may or may not be affecting his play. Although we don't have the same sample size to be as confident with Reimer, it seems that he will also rebound in a similar way, as argued in my earlier post. These two goalies look to be in very similar career trajectories, and it's a coincidence that they're both in a bit of a rut.

If James Reimer and Jonathan Bernier are of similar talents (as explained in the above-linked post) and Reimer is going to get traded, the Leafs, being tight against the cap, are going to have to take the cheapest backup help they can find. Maybe that help will simply be Drew MacIntyre, and maybe he's not as terrible as Gustavsson, but let's say for a moment that we supplant Toronto's current level of goaltending (a cool .920) with what Detroit has received this season .912 from both goalies).

So far, the Leafs have allowed 2,558 shots against, and with .912 goaltending, they would have allowed 225 goals, well up from their current 189. If we look at Chemmy's pythagorean expectation chart, we can see that not only would the Leafs be missing the playoffs, they would be on the edge of a draft lottery spot:

So looking ahead to the future, when only one of the Leafs' current goalies remains with the team, isn't it reasonable, given that they both have similar career numbers to a guy like Jimmy Howard, that a slightly cold season (like the one Reimer is having now) could result in a disastrous season? Now just think about what it would be like if the Leafs' backup wasn't a .912 guy (which is even a little better than league average this season) and who was going to return to earth like Jonas Gustavsson.

[Edit: As pointed out in the comments below, at this point in the season, the Leafs had allowed 219 goals against, not 189. At a .912 Sv%, the number of goals allowed would still be 225, so the Leafs would still be in a hypothetical "race" for a lotto pick.]