Curtis Rush Is A Garbage Reporter, His Editor Is An Idiot, And Why You Shouldn't Just Solicit Stories From Twitter

Curtis Rush of the Toronto Star wrote an incredibly inept article about the mouthbreathers that fired malicious tweets at James Reimer's wife April in which he managed to denigrate friend of the blog @Hope_Smoke.

Share All sharing options for: Curtis Rush Is A Garbage Reporter, His Editor Is An Idiot, And Why You Shouldn't Just Solicit Stories From Twitter

James Reimer is struggling mightily of late - a quick glance at the front page really highlights that goaltending has been an issue - but some geniuses decided that the best way to communicate their anger was to tweet truly vile things at his wife April Reimer. Everyone and their mother rushed to quickly provide their hot take on the situation but I thought that Jeffler wrote a good, level-headed piece that you can read here. The cruel tweeters were carved up by all and sundry and ultimately wildly outnumbered by those offering support.

As a bit of a history lesson, we here are PPP Amalgamated Heavy Industries And Kitten Ranching GmBH came into existence because the local media is generally populated by those that would have been described in the old days as being touched in the head. So of course dying media's leading light, The Toronto Star's sports section who would finish fifth in a three horse race, decided that they were going to get their best man on the case: Curtis Rush. Who is Curtis Rush you ask? That'd be a great question. From his bio "ex-online news writer, ex-Toronto Star police reporter, ex-copy editor, ex-CFL draft pick." Based on his work on the Leafs beat it's pretty clear why most of his titles are prefaced with 'ex'. He is atrocious and his piece on the Reimer taunts veers from embarrassing to incompetent and ends up at malicious.

Here is Curtis Rush's attempt at writing his story. Remember, gotta contact those that you're going to quote if you're a professional journalist. Otherwise you're just some smelly blogger in your mommy's basement: 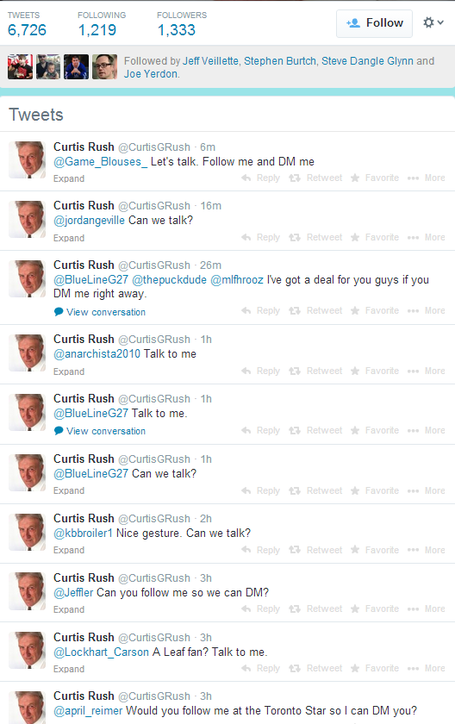 Good start! He contacts some people and tries to talk to them. There's a pretty conspicuous name you're going to see missing once you read his article though...That's right, at no time was @Hope_Smoke contacted as were the others that were quoted. That meant that the copy that originally was published had this attributed to our sports radio transcribing friend:

One person on Twitter suggested the attacks on Reimer are justified. A person called @Hope_Smoke tweeted: "The criticism of Reimer isn't unfair. He's paid to stop the puck."

Gee, that is terrible. What kind of monster would suggest that these attacks on Reimer - note the phrasing - were justified! How could @Hope_Smoke say that! I thought he was just a nice guy that helped up chronicle the goings on of sports radio...Oh wait:

Dreger "the criticism of Reimer isn't unfair. He's paid to stop the puck."

Curtis Rush is either so senile, incompetent, or outright malicious that he took a tweet that is clearly providing a quote from Darren Dreger and presenting it as @Hope_Smoke's in what I will assume is a deliberate attempt to smear him personally. That certainly seems to go against their journalistic standards:

Journalists who abuse the power of their professional roles for selfish motives or unworthy purposes are faithless to that public trust.

HS was quick to contact the Star and they were good enough to add a correction:

One person on Twitter suggested the attacks on James Reimer are justified. A person called @Hope_Smoke tweeted: "The criticism of Reimer isn't unfair. He's paid to stop the puck."

Upon seeing this story, @Hope_Smoke contacted the Star to say the tweet was meant as a criticism of Reimer and was not an attack on his wife. He or she would not give their real name.

Are you fucking kidding me Toronto Star? Not only do you add in the 'James' surreptitiously so that it no longer could be read as @Hope_Smoke suggesting that the attacks on April were justified but you put in a slimy hit against his refusal to publish his name. What does that have to do with your reporter's brutally incompetent and possibly malicious work? And not to go to the well too often but here's another highlight from those Star standards:

Good faith with the reader is the foundation of ethical and excellent journalism. That good faith rests primarily on the reader's confidence that what we print is true. Every effort must be made to ensure that everything published in the Star is accurate, presented in context, and that all sides are presented fairly.

Journalistic integrity demands that significant errors of fact, as well as errors of omission, should be corrected promptly and as prominently and transparently as warranted.

I would add emphasis but then the entire segment above would end up in bold. So much for correcting errors promptly, prominently, or transparently. Really great that their mistake got @Hope_Smoke lit up on 102.1 The Edge. Luckily, they had him on to set the record straight. Also, it's kind of funny how a real name is suddenly a necessity:

"He or she would not give their real name." Real names now important in a story that strictly used Twitter handles? http://t.co/sSC4nXWfWT

The good news is that the Toronto Star has a public editor to whom you can direct all complaints about how they've handled the situation. Her name is Kathy English and she can be contacted by e-mail at publiced@thestar.ca or by phone at  416-869-4949. Feel free to politely express your concern with Curtis Rush's shoddy work and the toy department's pathetic reaction.

Editor's Note: Curtis Rush was not contacted for comment because I decided to extend him the same courtesy he did @hope_smoke. If he'd like a correction he can e-mail me at pensionplanpuppets@gmail.com.

The entire article has been re-written and now there is no mention of @Hope_Smoke nor of the correction. It reads like an entirely different article and would seem to be an attempt to whitewash what happened: that the Star was experimenting with having drunken old men write stories in exchange for a cup of hot soup.

Hey look, here's a big clarification that finally addresses their own internal standards:

Clarification - March 25, 2014: This article was edited from a previous version that said a person on Twitter suggested the attacks on James Reimer are justified and referred to a tweet by @Hope_Smoke. Upon seeing the article @Hope_Smoke contacted the Star to clarify that his tweet was meant to say that criticism of Reimer as an athlete was fair but that he was not condoning personal attacks on Reimer or his wife April. The article also did not make clear that the tweet was quoting what TSN reporter Darren Dreger had said on a broadcast.