Bratislava: put it on your hockey map.

Share All sharing options for: KHL Hockey In Slovakia

It had been just over a month since I had the good fortune of taking in my first KHL hockey game in Zagreb, Croatia (again, a thanks to @Xterratu a.k.a. Mislav Jantoljak for the hospitality) and I was eager to duplicate that experience. The fans in Zagreb were totally nuts, the game itself was exciting, and the venue was well-prepared. In short, it was a fantastic fan experience, even if the hockey wasn't quite of the same calibre as we've come to expect from the NHL, and I was hungry for more.

Since moving to Budapest, Hungary back in September, I've been meaning to check out the city that was so maligned by that idiotic scene in the movie EuroTrip. As it turns out, Bratislava is a great place to hang out for a weekend, and if you're ever in Central Europe, I'd recommend checking it out. It's a relatively small town and doesn't merit the same length of stay as other nearby capital cities like Vienna, Prague, or Budapest, but it's also not quite as expensive and is very walkable.

Naturally, one of the best parts about Bratislava is that a strong hockey culture has existed there for a long time. The 2013-14 season is only the second that HC Slovan Bratislava has played in the KHL, but the team has been established since the 1920's and has been very successful in several other leagues. As it turns out, Slovan's opponent for the evening was HC Donbass, a Ukrainian club that entered the KHL at the same time as Slovan. 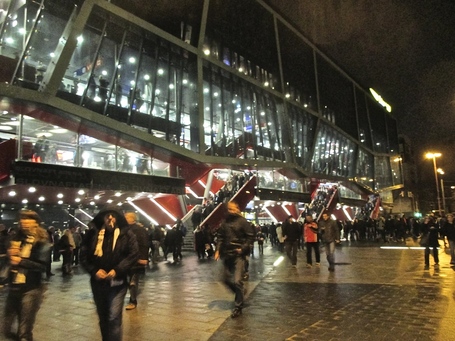 Above: Ondrej Nepela Arena, just after the the game.

As previously mentioned, Bratislava is an eminently walkable city and although HC Slovan's home Ondrej Nepela Arena is outside the city centre, it's possible to walk from downtown in roughly a half hour. I arrived in town on a train that was delayed, so I expedited that trip via cab, but since the city is on the small side, it only took about five minutes to get there. Traffic? Basically nil.
The arena itself was built a while ago, but was recently renovated - 2011 to be precise - for the IIHF World Championship and boasted a very nice LED jumbotron for replays and reasonable sight lines from anywhere in the arena. Approximately 10,000 people crammed into the building before faceoff (in what appeared to be a sellout), and basically no one arrived at their seats after puck drop.
Instrumental recordings of the anthems were played (as opposed to sung) and as cameramen panned over the faces of individual players to show them on the big screen, the crowd clapped politely for star players. Even Donbass' stars received a courteous round of applause, though the crowd refrained from whooping or screaming while the music was playing.

The above highlights of this game are without commentary in Russian or English, but you can find them if you want in this video. The game I attended starts at 4:49.

I have been told by several knowledgeable journalists that the range of talent is much greater in the KHL than in the NHL and as far as I can tell, this is accurate. Teams like Dynamo Moscow or Metallurg Magnitogorsk lose only a handful of games each season while others make the Buffalo Sabres look like a bunch of all-stars.

Now, HC Slovan was eliminated from playoff contention well before this contest, and HC Donbass had already clinched a spot some time ago, but although Donbass was obviously the stronger team on the ice, the game was always a close one (Donbass won 2-1), which suggests that at least most of the league is within a reasonable range of talent.

Moreover, Donbass has a few former NHLers, from their number one goalie Michael Leighton, to Latvian Olympic hero Oskars Bartulis, and the team captain Ruslan Fedotenko, but to be honest, there aren't many others. This is a good hockey team consisting of predominantly European players who haven't played much or any time in the NHL.

Slovan, for its part, has a few names that garner recognition from NHL fans. Miroslav Satan, Martin Skoula, Roman Kukumberg, Branko Radivojevic, and former Toronto Marlie Juraj Mikus are all regulars in the lineup, and there are a couple of others that have played in North America. Put simply, you need more than a few guys who used to be marginal NHLers to make a good KHL club.

As far as style of play goes, the game was (like I mentioned in my post on Zagreb) less physical than an NHL game. While Donbass was easily the harder-hitting of the two teams, bigger ice surfaces make throttling someone in open ice even more risky defensively speaking, and the board play was simply not as aggressive.

Neither team was afraid to play dump-and-chase hockey, and this match looked slightly more North American than my previous KHL experience. On the power play, both teams employed a 1-3-1 setup which, although used widely at home, was in fact developed in Europe to begin with. 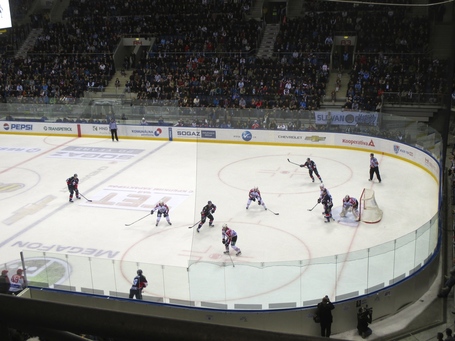 At the end of the game, the players from both teams lined up on their respective blue lines and stood in recognition of the players of the game. This is an interesting tradition in that it forces the losers to face their foes patiently and eb gracious in defeat. Then, they have to shake hands - yes, after every game. The display of sportsmanship may be disingenuous for some players, but I don't think anyone ever regrets acting respectfully, even if they don't feel like it at the time.

The Slovakian crowd claps in unison while the play goes on.

The fan experience at most NHL games leaves a lot to be desired. Crowds just aren't loud as they are in Europe and in different North American sports, music is always blaring and ruining the atmosphere, and fans are constantly bombarded with ridiculous sponsor messages ("the next five seconds of this game are brought to you by Acme!"). Oh, and concession stand prices? Ugh. Both KHL games I have attended have been a marked improvement over any NHL game I have been to in virtually every single aspect of the fan experience.

First of all, it cost only 1.80 Euros for a beer, and a giant sausage with mustard was only 2.50. There is an argument to be made about taxes and the cost of living and the price of alcohol, but I think we can all agree that prices are way too inflated at places like the ACC. Naturally, the Slovakians, didn't stop serving after the end of the second period, either. In addition, the whole arena is lined with small pubs, restaurants, and snack stands for pre-game partying, so although there is less selection of food during the game, fans know it's better to actually sit in your seat while the action is on rather than to wait in line for 20 minutes for a glorified hot dog.

Although perhaps not as rambunctious as their Zagreb-based counterparts, the fans of Bratislava were great. They were knowledgeable, applauding good plays, and whistling (which is their form of booing) at bad ones. Although European leagues are not known for having many fights, the crowd certainly went nuts for any kind of pushing and shoving after the whistles. I was somewhat disappointed to see that the team employed cheerleaders (who jumped around like crazy at the possibility of a fight), but people didn't seem to pay them that much attention.

Another thing that stood out is that fans in Croatia and the Ukrainian fans in Slovakia cheered, chanted, or sang regardless of what was going on the ice. In other words, although they reacted to penalties, goals, fights, etc. they didn't wait for those things to happen, either. The Slovakian fans had some of that, but waited more often than not for an exciting play to really get going. Of course, I'm sure they'd have been louder if their team wasn't trailing for half the game.

A small sample of the work by those wonderfully obnoxious Ukrainians.

One great aspect of the game was that a group of obnoxious Ukrainians had made the trip to Bratislava to attend the game. They sat as a group of 50 or so, all screaming and chanting along with their drummer virtually without rest throughout the game. A shouting match erupted between this group of hockey hooligans and nearby Slovakians before the first period was half over because the Ukrainians refused to put down their flags even while play was going. Arena staff had to surround them and force them to put the flags down on repeated occasions. Later in the evening, at the end of the game, many of the victorious Ukrainian players skated over to their fellow patriots' section in the stands and praised them for their support by miming clapping.

Bratislava's booster section was at the opposite end of the rink for obvious reasons and of course, were far greater in number. A team of drummers lead the thundering charge and they drowned out the Ukrainians whenever they could, deliberately choosing different rhythms to throw the others off. Some chants were sung to taunt, others to cheer, and others garnered the participation of the rest of the crowd, too.

The fans here often all clap in unison, and speed it up until they crescendo into a mountain of noise - and it's all done without music. In fact, on every single occasion that the arena decided to put on some music, the cheering stopped and people simply sat back and listened. Every time. During stoppages of play where no music was played between whistles (unthinkable in North America) the crowd was just as loud as during the game. It was great. It's almost funny that no one perceives the connection between a lack of fan participation and other arena distractions because it was so obvious. Music on, crowd quiet. Music off, crowd loud. Same goes with all those other dumb gimmicks like the kiss cam. As a teacher, this makes sense to me, because I know it's only when students aren't sitting in front a screen or otherwise being entertained/occupied that they get loud. Seems like it works the same way with with larger crowds in different settings.

In summation, the NHL has a long way to go before they top a night like this. A 20 Euro ticket gets you an evening of raucous excitement, full of just the right level of hooliganism. Outside, there were no fights or drunken screaming matches, just a bunch of fans who, for once like the players, left it all on the ice.