Darren Dreger spoke of what the Leafs would give up to get Ryan Kesler. It doesn't make a lot of sense.

Dreger "Toronto would have no problem moving Kadri & the 1st for Kesler and would pause hard if Gardiner was wanted too."

This struck me as particularly insane. Our first isn't worth a whole lot unless you're hoping we add a third member to our fourth line of the future next to Tyler Biggs and Frederik Gauthier. (Personally as long as that's the plan I hope the Leafs draft a literal Coke machine and have those two drag it around with them. It couldn't be worse than Jay McClement and would dispense tasty beverages.)

I appreciate that Ryan Kesler won a Selke and scored 41 goals, but unfortunately for Mike Gillis or anyone planning on spending a lot of assets on Kesler 2011 isn't the year that follows 2014 on the calendar. Ryan Kesler is soon to be a 30 year old. 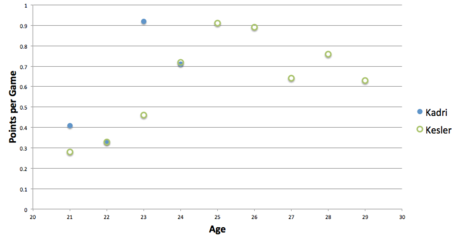 Here's the problem with Kadri and a 1st plus Gardiner for Kesler: I'm not sure I'd trade Nazem Kadri straight up for Ryan Kesler. To this point in their careers Kadri has outproduced Kesler by a fair margin, and before anyone says Kadri's 0.9ppg was a fluke driven by shooting percentage: so was Kesler's best season. Nazem Kadri is currently outscoring Ryan Kesler as well.

I'm not here to tell you Kadri is a better defensive player than Ryan Kesler, but based on a cursory look at possession data I wouldn't call this a huge win for Ryan Kesler, but the real issue is this: moving forward Nazem Kadri will enter his peak and Ryan Kesler has already exited his peak.

Why would the Leafs want to swap these players straight up, let alone pay a first and Jake Gardiner to do it? On NHL Tonight Bob McKenzie said that Mike Gillis would like to swap Ryan Kesler for an "established center" between 20-25 plus a top prospect. Gillis has also been rumored to want to send Kesler only to a team in the Eastern Conference that's not located in Canada.

Best of luck Mike, we'll twiddle our thumbs for the inevitable crybaby article about how other GMs didn't give you what you wanted at the deadline, a la Luongo.