The Leafs are in a decent spot to make the playoffs, can they repeat their success from last year?

With eighteen games left in the season the new standings that no one understands look like this: 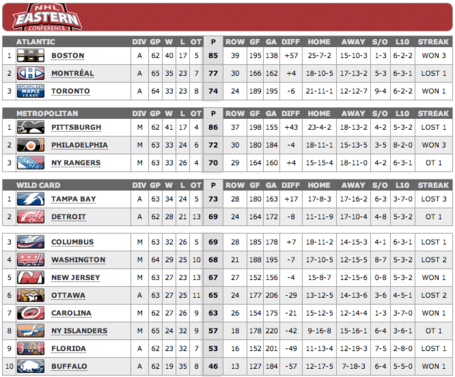 The Blue Jackets have 69pts in 63GP, they're on pace for 90pts. Washington, right behind them are on pace for 89. We know that as things come down to the wire there will be more three point games, so James Mirtle's guess of 92pts for the last playoff spot feels reasonable.

With 18 games left, a 9-9-0 finish will almost certainly get Leafs into the playoffs. Tough schedule but that's pretty decent odds.

I think that's about right. The Leafs need to play on an 82pt pace the rest of the way, so let's look at the upcoming schedule:

That's pretty tough, especially if Dion Phaneuf misses time. The Leafs play all three California teams on the road (combined record for those three? 119-53-19, a 110pt pace dragged down by the Kings...), as well as facing the Blues and Bruins at home.

The Leafs play 12 of the final 18 teams against teams currently in the playoffs, and of the six teams out of the playoffs the Leafs will play the Jets, Panthers, Devils and Senators never seem to be an easy game for this team.

The Leafs play 8 of their final 18 games at home.

So what do you think, do the Leafs make it to 92 points? Will we get to watch playoff hockey for the second time in the past decade? Will any of us survive watching playoff hockey again?