Isn't it weird that Leafs' management was gung ho about signing Colton Orr?

Share All sharing options for: BREAKING: Colton Orr Is Terrible At Hockey

Last summer was a boon for Leafs fans as they were treated to a series of interviews with team management conducted by fans. That meant that some of the issues addressed in our perpetual discussions about the team were presented and answered. Oh and by boon I mean nightmare because those guys said some just stunningly stupid things. Here is Leafs assistant coach Greg Cronin on Colton Orr and Frazer McLaren:

AB: Do you consider Frazer McLaren and Colton Orr pure enforcers, or would you attribute other hockey value to them?

GC: I think they're different players. I think Orr has proven he's more than just an enforcer. He was used a little on the third line this season, he is one of the more reliable guys at chipping pucks out, knowing the conditions of the game, chipping pucks out and chipping pucks in, changing smartly, and he's very responsible on the back check. Randy has a lot of faith in him. Frazer McLaren hasn't developed into that type of a role yet. He's got some sneaky athleticism that hasn't come out yet; he hasn't learned how to protect the puck as well as he can, but he's getting better at it. He wants to be more than just an enforcer. I think that his goal should be to develop the same type of role and identity that Orr has now. It's just a bonus that both are fairly good athletes; they can grow, they can make us a better hockey team, not just as far as fighting goes.

Emphasis is mine because I want to really highlight how out of touch those comments are with reality. Read them a few times and think back on this season and try to recall whether you ever saw what a professional hockey coach professed to believe. Now, friend of the blog Tyler Dellow has been doing a lot of work looking at a myriad of stats in various game states, sometimes incorporating video, and trying to isolate problems at a more granular level. Living in Toronto and having a statistical bent means that he's looked at the team quite often and really you should read everything he writes about the team but I digress. Here's his review of the statement by Cronin:

A proposition: if Colton Orr is "one of the more reliable guys at chipping pucks out" it will show up in his numbers following defensive zone faceoffs and they won't be horrible. Reality: the Leafs had a 10.7% Corsi% in the 37 seconds following DZ faceoff losses last year with Colton Orr on the ice. Whether he's good at chipping pucks out or not, teams are crucifying the Leafs in a situation in which a player's defensive ability would appear.

Orr was on the ice for 12% of the Maple Leafs defensive zone faceoff losses at 5v5 in 2013. Amongst guys who were on for at least 10% of their team's DZ losses, Orr's 10.7% Corsi% ranks 3,428th out of 3,447 people with enough TOI to qualify. The Leafs were a garbage fire of historic proportions when they lost a DZ draw with Orr on the ice. That said, Orr actually surpassed the figures posted by a couple of other heavies last year: Chris Thorburn, Ryan Reaves and BJ Crombeen all posted even worse figures.

As far as Cronin goes, you wonder. Is he insane? Is he lying? Is he aware of how poor the Leafs results were in a defensive situation like this with Orr out there? I have no idea. We're starting be able to measure stuff finely enough that we can ask these questions though. It's hard to imagine any sort of a defence for the guy as a hockey player, no matter what the Leafs might say.

There's a lot of build up in that post that is extremely valuable to understanding the background work that went into coming to that conclusion but it boils down to what we said all summer: the Leafs are batshit crazy. The Leafs have so far committed five years, $5.925M, a valuable roster spot, and a valuable SPC slot for 231 games, 8 goals, 5 assists, and 57 NHL fights. Those numbers include this season's brilliant 54 pointless games which gave us this cute graphic: 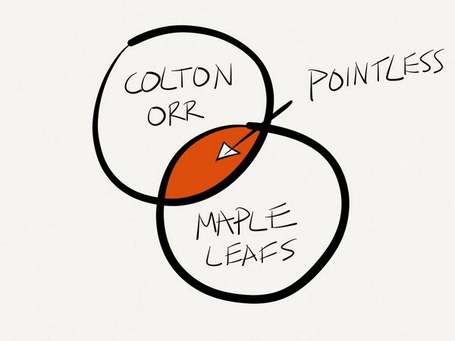 You'd be hard pressed to look at Colton Orr's performance and find any bright spots but feel free to look and see. Carlyle had so much faith in him that his ice-time per game fell from 6:23 to 5:23. Ultimately, his signing had to do with the Leafs' unending pursuit of the ethereal factors of team building that are used as crutches when the simple explanation is that you cannot possibly predict how things like 'leadership' and the rest develop within the dynamic of a team.

Having a guy like Orr around makes it easy for hack reporters to write their stories when things are going well - Colton Orr strikes fear into the hearts of opponents! - and when things are going poorly - other teams aren't engaging Orr this year and so they aren't scared anymore! - but the reality is that the real answer behind the Leafs' struggles can usually be boiled down to "the team wasn't good enough". Quotes like Cronin's just show that the rot has well and truly moved up towards the head. It's up to Shanahan to find the cure.