Tracking the development of possession metrics of Toronto Maple Leafs players over the past 3 seasons.

A couple of days ago I tweeted out the following picture: 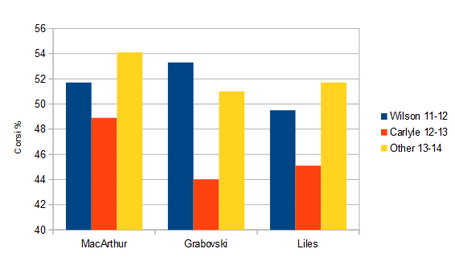 It shows the Corsi % of three former Toronto Maple Leaf players.  (If you're not familiar with Corsi %, it's a ratio of the shot attempts for and against while a player is on the ice.)  The blue bar is those players' Corsi % for the 64 games Ron Wilson coached before getting fired in the 2011-12 season, orange is last year under Randy Carlyle, and yellow is this year on different teams.  The effect is pretty stark: for these three players Randy Carlyle was a big drag on their possesion, probably something in the range of 4-6%.

That was a quick glance at what I dubbed "The Carlyle Effect", but how does it look if we expand it to include players who have stayed with the Leafs over this period?  I've gathered all the players who played at least 10 games under Ron Wilson in 2011-12 and at least 10 games under Randy Carlyle in one of the two seasons since then and repeated what I did in the chart above.  For the 11-12 season I've divided results into Wilson and Carlyle periods.  A few players aren't included in the 11-12 Carlyle segment because they played under 10 games (likely due to injury).

It turns out that there are nine players who played at least 10 games for the Leafs in each of the past three seasons, so they're our most useful group to look at here.  There are five more players who played at least 10 games for Wilson in 11-12 and in one subsequent season under Carlyle, and they're included too.  Here's what it looks like (click to expand):

There's no other way to put this: Randy Carlyle has decimated the Toronto Maple Leafs possession not just on the team level, but also on the individual level.  Of the 14 players looked at in 11-12, four remained within 1% of their Corsi under Wilson after Carlyle took over: Grabovski, MacArthur, Gunnarsson, and Frattin.  The other ten players all saw their Corsi fell, often pretty dramatically.

The effect really becomes obvious the next year: not a single player had a higher Corsi in Randy Carlyle's first full season behind the bench (12-13) than they did under Ron Wilson the previous year.  Zero.  No players.  The average drop was 5.2%!

Amazingly, the effect actually continued this past season, as only one player in this group (Nikolai Kulemin) saw his Corsi % rise between 2012-13 and 2013-14.  It rose 0.6%.  The remaining 8 players all saw their Corsi % fall again.  This time the average drop was 1.6%.  That means the combined average drop for players who have stayed with the team since Ron Wilson coached is 6.8%. To give you some idea how insane that is, 6.8% is the gap between the league's best Corsi team this season (the LA Kings) and the 19th ranked Philadelphia Flyers.

"OK," you're thinking, "that sounds pretty bad.  But at least the worst is over.  Carlyle's coaching surely can't get any worse."  If only.  If only!  The Toronto Maple Leafs' Fenwick Close over the full 82 game season this year was 41.5%.  But over the last 30 games it's even lower: just 39.3%.  As bad as Carlyle's effect on possession has been, it's still getting worse.

As I said, there's no other way to put this except to say that Randy Carlyle has decimated the Leafs' possession numbers (and continues to do so).  The effect is virtually universal among players who have played for the Leafs, both those who have left like Clarke MacArthur and those who have stayed like Phil Kessel.  The effect is also clear at the team level.  And the effect is not minor: players who have been with the Leafs for the past three years have seen their Corsi % fall by 6.8% and it's still falling.

It's true that it's not possible to know for sure exactly how much of this can be pinned on Carlyle, but given the incredible consistency of the effect and the fact that everyone's numbers were better under Wilson and everyone's numbers rise when they leave the Leafs, it seems pretty clear that the bulk of this problem is coaching.  If that's not enough of a reason to fire Randy Carlyle, it's hard to imagine what would be.