The positioning of the Leafs' wingers undoubtedly made it harder to break up opponents' forechecks and start decent breakouts.

We all know that the Leafs spent way too much time running around in their own zone in 2013-14. In fact, they did in the lockout-shortened 2012-13 season too. Possession numbers from this season and last season reflect this fact, and my own work tracking time on attack certainly helped show that it wasn't just a question of shots, but rather that the team was actually getting hemmed in all the time.

The million dollar question, as posed by Taylor Hall here in this Tyler Dellow article, is what to do with this information.

Whether they’re useful or not (referring to data or, to use the phrase I hate "advanced stats"), I do think they are for sure, but the thing for a hockey player, if you’re an advanced stat guy and you’re describing to a hockey player, you have to have like some kind of end point. Like, what does he have to do better to get this stat better. That’s the thing that I’m lost on, with Corsi and Fenwick and all this stuff, how do you improve a player by it, what do you tell him?

Hall's point is a good one. We know the Leafs' possession numbers are bad and we've all seen them run around in their own zone a million times only to take an icing, a penalty, or a goal against as a result. So how do we turn these numbers and observations into something "actionable"?

To start, look at Gus Katsaros' post on the X's and O's of the Leafs' defensive zone play. I think he absolutely hits a lot of proverbial nails on their respective heads, but particularly with this part:

This is exactly what the Leafs' forwards have done all season, and it dovetails perfectly with my own assertions about the problems with the Leafs' breakout. In a nutshell, Randy Carlyle coaches his wingers to drop too low, they get "accordioned", to borrow Katsaros' phrase, and they wind up chasing the puck. When their defencemen finally do get a hold of the disc, the wingers are in no shape to give them outlet options, and the D wind up turning it over. Instead of incorrectly labelling the Leafs as "chasers" or their D as prone to turnovers, let's collectively acknowledge that this is something systemic. Why is this systemic and not simply endemic? Because every single Leafs winger does it. Observe just one game: 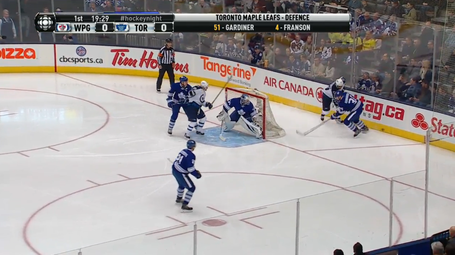 Troy Bodie and Nikolai Kulemin (Note: BOTH of them doing it at the same time is actually, incredibly, what they are told to do. Both point men are wiiiide open.) 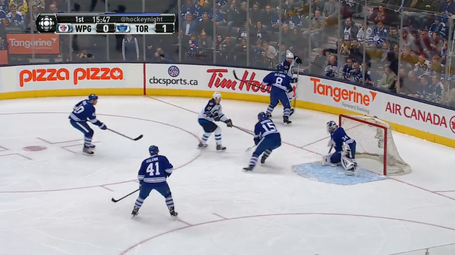 Mason Raymond (Note: Lupul is also down low, but he had to chase a rushing Jets player down low. He is temporarily out of position, but can be forgiven because he was backchecking when Kadri got caught up ice.) 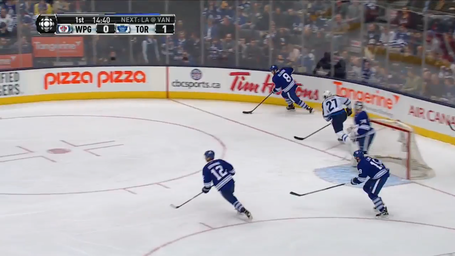 Phil Kessel (Note: He's the furthest Leafs player on the left of the screen. It's harder to capture RW with the TV cameras on this side of the ice, but you can still see that the other point is wide open. If you think Kessel is far out enough on this one, sorry. The Jets went D-to-D on the Leafs just a second or two after this screen shot like it was a power play.) 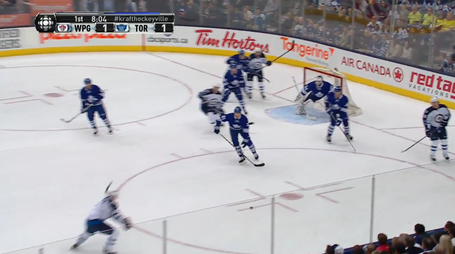 Jay McClement (Note: this was one of the games where Carlyle dressed 11 forwards and had Kulemin play C with McClement on the wing for a few shifts. Here, you can see McClement get caught flat-footed by a pass and he's standing way too close to his own net.) 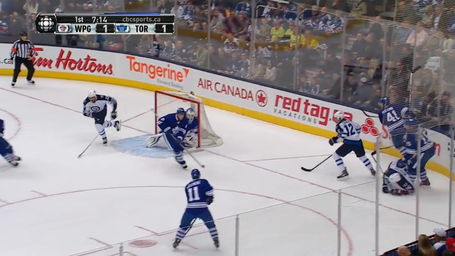 David Clarkson (bottom) and Dave Bolland (far right) (Note: Bolland is filling in for Raymond here, because Raymond backchecked into the zone first, making him F1 and Bolland F3. Clarkson is looping in the zone and turning his back on the play like a peewee player in order to go back and cover the man he missed coming back initially.) 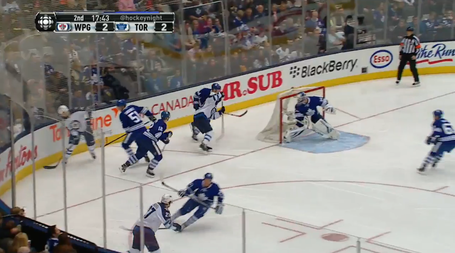 OK, I'm tired of this, now. There are still a few wingers to go, but by now the larger point I'm making should be obvious, and the only reason it took until the second period of a single game to get these shots is the angle of the TV cameras. The Leafs' wingers are coached to go too deep, they get "accordioned", chase the puck for a while, rarely give proper outlets to their D, and then can't break out of their zone to properly utilize their rush speed. Rinse, wash, repeat.

Let's hope we never have to watch this nonsense again.