Price Is Out, Chris Kreider Is Innocent, And HabsVille Is Insane

A good portion of Montreal fans and the less intelligent sections of their media coverage are suggesting that the Rangers Chris Kreider crashed into Carey Price on purpose in an attempt to injure him. Christ, what morons.

Share All sharing options for: Price Is Out, Chris Kreider Is Innocent, And HabsVille Is Insane

I don't think that it's news that Montreal fans live in a fantasy land. You can blame whatever you'd like but to a large portion of the fanbase still lives in the 1970s where a Cup was their birthright and it could be accomplished just by dressing the frenchiest team that ever frenched. I'm sure the endless drooling over their pre-game ceremonies doesn't help but as one astute Twitter personality said, when it comes to ceremonies they have the distinct advantage of having been the Habs. We'll see how people react the 70th time they run some variation on their flame-related motto when, instead of Jean Beliveau passing the torch to Guy LaFleur, fans see Vincent Damphousse passing the torch to Patrice Brisebois. Magical!

But I digress, we're hear to speak about the insane conspiracy theory of the paste-eating wing of the Habs media and fanbase that thinks that an NHL player, when faced with a breakaway and an opportunity to score in a conference final game, would decide in a split second that they now have their best opportunity to win the series by launching himself feet first into Carey Price's pads. I'm not going to give any oxygen to the ridiculous fans that have bought into that ludicrous idea but I will note some of the talking heads that are giving the conspiracy theory oxygen.

#rangers Chris Kreider was penalized for a hit on MA Fleury in the second round.

Oh he once had a goaltender interference penalty called on him? I'm sure that never gets called against the Habs when it's caused an injury to a goalie...Ooops

#NYT Kreider left his feet on his own, he was not tripped. Skating 36.2 km/h per @hockeynight at impact #Habs #HabsIO

I'd get heat from #Habs fans if I suggested it wasn't purely accidental had, say, Eller wiped out Lundqvist similarly #Habs #NYR #HabsIO

Larry Brooks got ahead of the old "KREIDER IS KNOWN FOR THIS!!" talking point:

Habs' Talking Point is to refer to Kreider's supposed reputation for running goalies. Know how many GT INT pens he got in reg season? Zero.

Alain Vigneault, used to dealing with the vultures, sums up the argument thusly:

Actually, the worst part about the world is that everyone thinks that they are entitled to their own opinion regardless of how tenuous its hold on reality may be. The fact is that there are opinions that are wrong and stupid and suggesting Kreider took Price out on purpose is one of them. Of course, it doesn't help that Michel Therrien is suddenly reversing course:

Therrien after Game 1 on Kreider-Price incident: "I think it was accidental, honestly." Price is for the series now he calls it "'reckless."

Look, if you want to see what "accidentally on purpose" injuring a hot goaltender looks like then you just need to call up the video of Sportsnet's lead hockey dipshit Nick Kypreos on Grant Fuhr:

Brandon Prust also added fuel to the fire by suggesting that hockey players know how to make such collisions happen and look like accidents. That definitely speaks more to what kind of person Brandon Prust is than to whether Kreider hit Price on purpose (hint: you have to be a bit of a shithead to brag about knowing how to injure someone while making it look like an accident). Then again, maybe he's speaking from personal experience based on this video. Or maybe he's upset that it's his job as the enforcer on the Habs to ensure that no one runs the goalie. Guess he's a total failure since Price is now out for the series. The best comment I've seen on Prust's "advice": The worst part of this whole Kreider thing is Prust's suggestion that he can tell Kreider something about skating technique. I can understand why someone who's skating more closely resembles molasses and has so much experience falling thinks it is a simple thing to adjust your body when you're falling. Of course, Prust couldn't skate 30km/hr+ if he was holding on the back of a truck.

But back to the members of the traditional media acting wholly irresponsibly and fuelling this ridiculous angle. The mittenstringers demand that players demonstrate their masculinity by driving to the net hard and having no regard for their safety or that of the opposition goaltender's. What's the first prescription when a team can't score? Drive the net, create traffic in front of the goalie, and make it hard for them to score. Then when a player does that, then heaven to betsy they start clutching at their pearls and demanding that heads be put on spikes and intent or reality be damned.

Ultimately, all this has done, like so much in sports, has exposed people are partisan hacks. It's funny to me as a neutral observer (in that I hate every NHL team more or less equally) is that I know Habs fans sure didn't come down on Brian Gionta in the same way when he ran James Reimer and concussed him "accidentally on purpose".

That play had a huge role in costing Ron Wilson his job and giving the Leafs Dave Nonis and Randy Carlyle which is basically unforgivable. A mittenstringer like Adrian Dater might even suggest that Price's injury was karma. I'm not Dater so I'll just say that it sucks that Price is out for the series and that I hope that the Habs' players don't do anything stupid to Kreider or Henrik Lundqvist because when the media starts pushing their revenge fantasies on the players and throwing gas on a fire, we sometimes end up with some truly forgettable moments.

Update From The Awesome Puns Department 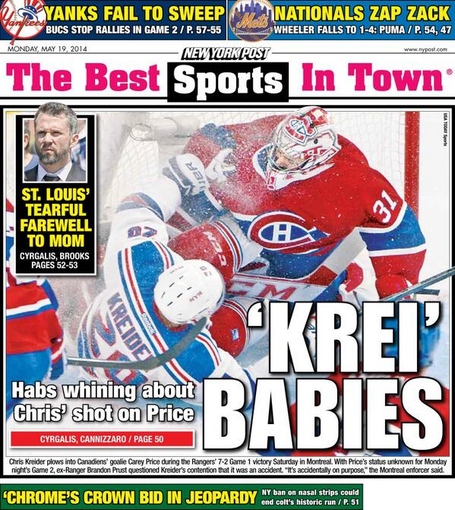